"Dirty gem"
The warrior women of Dahomey defend their people against capture by neighbouring nations for the white foreigners’ slave trade – in cinemas from Friday, October 7th

Outside of the Greek myth of the Amazons, we don’t really think of armies as being made up of women rather than men prior to the last few decades, yet historically this actually occurred in a West African country, the Kingdom of Dahomey (further info: National Geographic; Wikipedia) between the middle of the 17th and the end of the 19th centuries. These warrior women are the subject of this film, which takes place in 1823.

A prologue shows a small unit of the women in action under their General Nansica (an unforgettable Viola Davis) as they attack and slaughter a unit of (male) soldiers from the neighbouring Oyo kingdom who have invaded one of their villages. These women are fearsome indeed and fly in the face of the representational norm female or military. 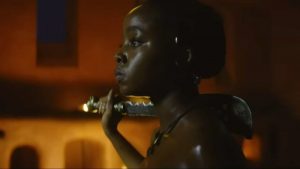 After this compelling, action-packed opening, the narrative shifts to follow rebellious, young Dahomey girl Nawi (Thusu Mbedo) whose traditionalist father attempts to marry her off to an older man. She takes an immediate dislike to this proposed husband and refuses the match. So her father instead takes her to the king’s palace to become a slave to King Ghezo (John Boyega). At least, that’s what you assume her fate will be, but once inside the gates she and numerous other newcomers have the option to train as soldiers for Nansica who puts her under a trusted lieutenant Izogie (Lashana Lynch, the black female 007 from No Time To Die, Cary Joji Fukunaga, 2021).

Following the template of Full Metal Jacket (Stanley Kubrick, 1987), the film observes the training of these women into full-fledged fearsome fighting machines (even if this episode doesn’t quite equal Kubrickian rigour in its execution). There is also much introspection on the part of Nawi whose independence gets her into trouble with Nansica’s chain of command but whose initiative (in the manner of so many characters in individualism-oriented, Hollywood films) ultimately proves an asset. 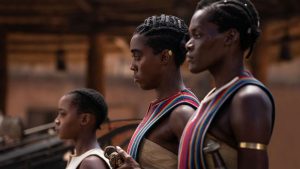 This is the time of the slave trade, with black nations selling members of their neighbouring countries – those captured in war, for instance – to profiteering white westerners. It would be tempting to try and paint Dahomey as not taking part in this, and indeed much is made both of the warrior women freeing slaves and of a Westernised, black man travelling with the slavers forced to come to terms with the evils of the trade. This may be a case of playing fast and loose with the truth.

This is a story about black people, specifically women. This means that, without relying on the often ridiculous, historical inaccuracies of colour-blind casting, it provides black actresses (most of the cast) with some spectacularly good parts and enables their delivery of some memorable performances. Moreover, the extraordinary women depicted here actually existed in history; the fact that a halfway decent movie has been made about them is a cause for celebration.

The Woman King is out in cinemas in the UK on Friday, October 7th.

Watch the film trailer below. (Please note that the irritating, ill-judged pop soundtrack is not representative of the film):

Retired from Her Majesty's Secret Service, James Bond is called back into duty when he uncovers a plot that could wipe out mankind - now on most VoD platforms [Read More...]