"Dirty gem"
A striking debut from up-and-coming Ukrainian filmmaker, this relentless tale of survival blends in folklore with the gangster genre - from the Raindance Film Festival

The ancient people of Ukraine believed that the New Year was a spiritually fruitful moment, a point at which spirits from above would descend into the world of the living. These could be angelic forces, as well as demonic spirits, seeking to corrupt feeble souls. The Malanka festival was organised as a ritual of dancing and costumes that would ward off the spirits of evil for the year to come.

The festival serves as a colourful backdrop for a promising new film from Ukraine, by the up-and-coming filmmaker Dmytro Sukholytkyy-Sobchuk, whose graduation project had already focused on the topic of the Malanka festival,a theme which he returns to with his debut feature Pamfir, modernising and re-contextualising the carnival’s metaphysical themes, by setting in motion a cold gangster narrative about the clash, not between evil and angelic ghosts, but between an exploited man and the order which perpetrates his enslavement. The film nevertheless remains distantly faithful to the magical elements that are enmeshed in the Malanka carnival as a warm tribute to folkloric tradition.

Set in the border region of Bukovina, ruled by an obscenely powerful oligarch, Mr. Oreste (meaning ‘he who stands on the mountain’), Pamfir depicts a world-order in which an authoritarian class has succeeded into imposing a violent and criminal way of life upon its subjects, who must obey from fear of relentless persecution and repression. The stagnating social landscape has created a situation where men are forced into becoming the hirelings of the small-town mafia, carrying out illegal work such as smuggling packages, through the woods, into the neighbouring Romania. The titular character, Pamfir (meaning ‘stone’), has fled from this dire state of affairs, having left his family behind to work as a well-digger in Poland. Upon a brief return home, after being reunited with wife and son, the latter provokes a fire which burns down a prayer house, inevitably owned, as most things in the village, by the figure-head of oppression, Mr Oreste himself. This new debt triggers a series of obstacles for Pamfir who, sadly, finds himself with no choice but to return to his old ways, those of a drug smuggler, meeting the infamous ‘one last job’ in order to right the wrong committed by his son. 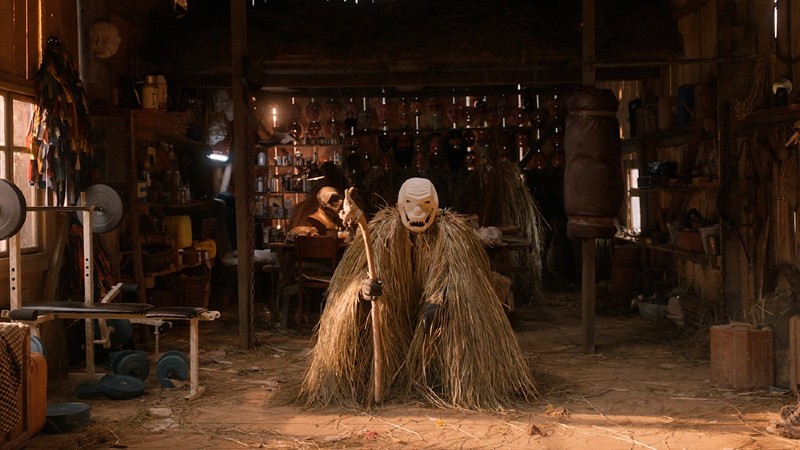 It is immediately clear that this film exudes a vital sense of realism, doubtless, a consequence of the director’s previous documentary work on Bukovina’s traditions and people. The performers speak in a Carpathian dialect, close to the Hutsul dialect, which reflects the will of the filmmaker to represent the multicultural setting of Western Ukraine as authentically as possible. The trio of performers shine as father, mother and son, reunited and loving, although, under duress. The film is rich in subtle moments of poignant realism, such as the scene in the woods where the family have to start imitating rabid dogs in order to drive off a menacing horde of bears — these moments bring the characters to life and strike one as touchingly real.

Stylistically, the film gives off a kinetic energy akin to that of the films of Aleksei German, namely Khrustalyov, my car! (1998)(a bald and moustached strong-man Oleksandr Yatsentyuk in Pamfir recalls Youri Tsourilo, as the ill-fated Klenskii, in Khrustalyov). As in many of German’ films, the viewer is thrown into a stage in constant flux where multiple performers move about freely, fastly speaking with their lines of dialogue overlapping. Following German, who mastered the technique, Pamfir’s formal logic is the ‘one scene, one long take’ principle. The restless cinematography by Nikita Kuzmenko is to be applauded, for the smoothness of the steady-cam operated movement not only heightens the sense of realism but also, plays hand in hand with the actors’ choreography, and the tempo at which they deliver their dialogue.

But this very kinetic energy tends to lend the camera an involuntary distance which eventually plays deceptively against the film. Indeed, it hovers about characters in unproductive ways, at times, when it cancels out the tension inherent to the situations. For example, more tension was needed when the smugglers, running across the woods with drugs attached to their backs, are spotted by Mr Oreste’s ominous lackeys. Pamfir’s fight near the third act recalls Park Chan-wook’s Oldboy (2003), but the suspense needed to rise, and brim out, effectively unleashing the fighting. Further, the narrative information can at times arrive too late, thus withdrawing the sense of tension as a consequence of a lack of exposition. On a similar note, some visual components, mainly related to the geography of the space, are not sufficiently exposed, such as the deadly tunnel at the end — where exactly is it? When do we enter it?

Finally, the film seems to culminate very soon (too soon), as if the initial scenes that lay the foundations of the drama were given over-abundant screen-time, relative to the subsequent scenes which, in effect, play out and deliver the drama previously promised. As the director says: ‘if you were to sit down and retell it (the narrative), it would be very simple.’ Indeed, and for this very reason, one comes away with the regret of not having been explained why, before his flight to Poland, Pamfir took his father’s eye out in a fight ; or lamenting over the missed opportunity to learn about Mr Oreste’s mysterious rise to power.

In a nutshell, Pamfir suffers from not pushing far enough the components that make it successful in the first place. It portrays a situation of grim hopelessness, but does not linger in its pathos sufficiently to convey it to the audience. These elements may have prevented Pamfir from dangerously flirting with becoming one more of the many ‘One last job’ stereotypical narratives.

While Pamfir fails to deliver on some of its promises, it does provide us with a striking and charismatic central character: a beast of a man who grumps and growls, lets out animal sounds and laments at his own ignorance. This almost caricaturesque dimension of Pamfir’s behaviour aims at showing the bestiality of a man raised under the tight grips of the mafia, a society which grooms its men into becoming beasts, a culture that engenders barbarians in order to use them to sustain its own barbaric nature. Pamfir represents the attempt to circumvent this destiny, while inevitably retaining some of that bestiality inside.

Pamfir is released in selected cinemas on November 3rd.