"Filthy genius movie"
Superb British-Zambian fiction movie about witchcraft is guaranteed to make you both laugh and cry, thereby raising awareness of a very serious issue - on BritBox on Monday, March 17th

To laugh or not to laugh, that is the question! I went to the press screening of I am not a Witch and a film critic left the cinema halfway through boiling with rage. I later found out that this critic, who I happens to know very well, left because she was angered at the laughter coming from some members of the audience. Many people, including myself, were laughing at the predicament of eight-year-old Shula (Maggie Mulubwa), who is accused of witchcraft and is forced to live with other “witches”, in Zambia. Were we being entirely insensitive to the plight of women?

I thought about it and I decided that the answer is no. I wasn’t laughing at Shula, and I don’t think others were, either. In reality we were laughing at the absurdity of a society that still oppresses and punishes women in such a primitive way. The accusations are absurd (locals claim that Shula interfered with the weather), the exorcism is clownish (the priest looks like Stephen King’s It meets Carmen Miranda), the trial is ludicrous, and so on. 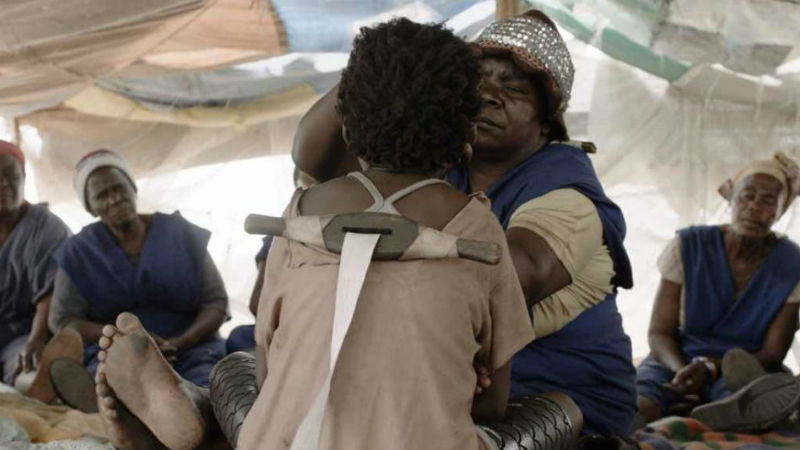 The witches are forced to wear a white ribbon in order to prevent them from escaping. This ribbon is hundreds of metres long, and they carry a giant spool for winding it. They are assured that they will turn into a goat if they cut such ribbon. It’s not these women that are ridiculous, but instead the patriarchal society that created these rules.

The belief is witches in conspicuous throughout the movie, and no one dares to challenge the tradition. Forget Carl Dreyer’s Day of Wrath (1943) and any film about the Salem’s trials. In I am not a Witch, the women too are convinced that they are witches, and it only takes a white ribbon in order to prevent them from running away. In fact they are fully functional and even integrated into society. They dream of redemption, and not acquittal. A profoundly lyrical and yet sordid reminder of the gripping power of cultural superstitions. 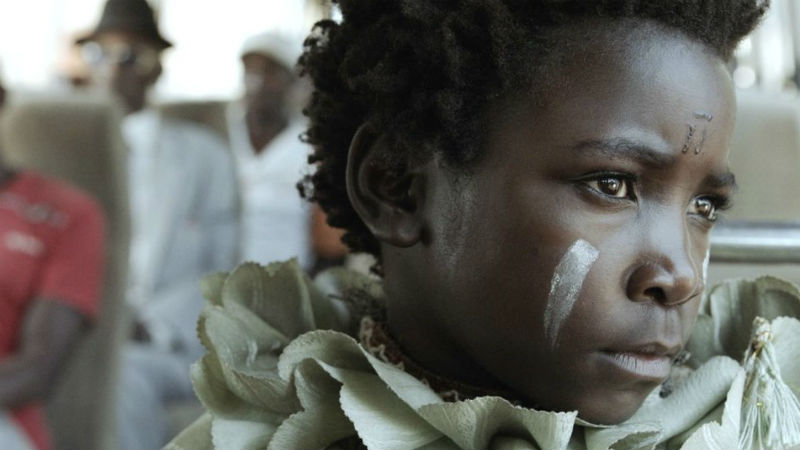 Rungano Nyoni’s first film is a mockery of cultural traditions vestigial of very primitive practices, which should belong nowhere in the modern world. The symbolism of the white ribbon is very significant: instead of adorning the hair or the body, here it imprisons females. Ultimately, I am not a Witch is a denunciation of a very serious issue, all with an artistic streak and a lighthearted touch, yet never complacent. The mostly static camera work and talking heads interviews might remind of the Austrian filmmaker Ulrich Seidl. The photography is extremely bright, just like the arid landscape, with very few trees to block the sun. The colours oscillate between beige and light grey.

I am not a Witch is showing at the BFI London Film Festival taking place between October 5th and 15th, and it’s out in UK cinemas the following week (on Friday, October 20th). Not to be missed. I am not a Witch is one of these films that reminds you how deliciously dirty cinema can be. It’s out on all major VoD platforms in February 2018. On BritBox on Monday, March 17th (2021).

Elaine casts a heady spell on every man meets, and viewers too are certain to become intoxicated with this modern-day witch fairy tale [Read More...]