"Greasy movie"
Retired from Her Majesty's Secret Service, James Bond is called back into duty when he uncovers a plot that could wipe out mankind - now on most VoD platforms

From Dr. No (Terence Yoiung, 1962) to Die Another Day (Lee Tamahori, 2002), the Bond films followed a (loose) linear narrative that spanned twenty films, but starting from Casino Royale (Martin Campbell, 2006), the Daniel Craig films set out to build a completely new universe, and one that was contained to this Bond alone. No Time To Die is no different, so you won’t be surprised to learn-and this is no spoiler- that Craig’s fifth film begins directly after the events of Spectre (Sam Mendes, 2015). We find Bond head over heels in love, enjoying the Italian countryside with Madeleine Swan (Lea Seydoux) by his side. Spectre rears its ugly head, no hollow metaphor, but the name of a criminal organisation who inform the retired agent that his betrothed is not who she claims to be. So he abandons her at a train station, for a solitary life in Jamaica where he spends his days contemplating his sins over water, but a chance encounter with CIA favourite Felix Leiter ( Jeffrey Wright) revives the adventurous spirit that has laid dormant for much too long.

The film’s first half is uproariously exciting, while the second part feels plodding, wordy and arguably ponderous. By the time the audience has hit the villain’s lair-this time a WW2 base, decorated by poisonous herbs-the novelty of the film has worn off, and the zippy dialogue (much of it written by Fleabag starlet Phoebe Waller Bridge doesn’t hold the same punch it must have held in the writer’s room. Neither do the emotional revelations, which is a pity for a film that is entirely about falling in love. Make no mistake, this Bond only has eyes for one woman, no matter how well Ana de Armas looks in that dress, or how nicely Lashana Lynch’s Nomi has slotted into the 007 role since Bond retired for a life of sand and sorrow. Considering the importance of her role (Bond entertains his lady companions less than any other film entry), Seydoux proves remarkably adept at playing the Hellenic figure, in a tale that both references and reveres the Greek tales of yore. Fittingly, the chemical she fears will take over the world is called Heracles, while Mathilde -the five-year-old child she swears isn’t Bond’s – doubles as her greatest possession and personal Achilles Heel.

Then there’s Rami Malek, serving as the film’s central Paris, the master weaver of a great tragedy, yet suspiciously hidden behind his guns, guards and plants. He’s menacing, but could be more so, and he’s definitely underserved by the garish makeup and scars on his face. Much better is Christoph Waltz playing a much smaller role, the nefarious Ernst Blofeld finally implanting himself in the brain of his most feared adversary. In one of the film’s more inspired set pieces, Bond and Blofeld go tete a tete a la Hannibal Lecter, and the scene echoes the probing confrontations that had long proved Thomas Harris’ speciality. Waltz is a two time Oscar winner, but it’s Craig’s show, and he is magnificent in this film, embodying an agent torn between his heart and his country. He’s more relaxed, and delivers some very funny lines, although the film doesn’t offer as many gags as it perhaps should. Indeed, it’s a very dour affair, and there’s scant moments of levity to be had, although Ben Whishaw (again, playing the flappable Q) does his best to rise up to the comedic tentpole. 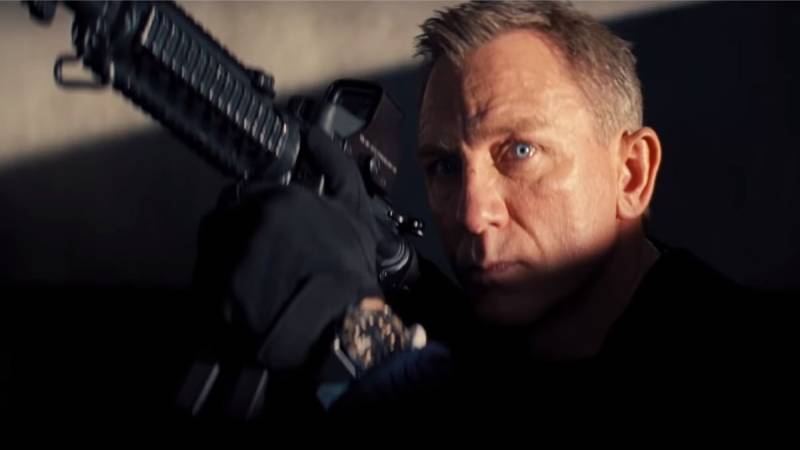 As plots go, it’s strangely by the numbers, making it in many ways the most traditional Bond story Craig has committed to film. And yet the film never revels in preposterousness, let alone revel in it, and there’s scarcely any banter between the main players as they set off to save the world from the greatest threat it has ever faced. But while there’s little humour, there are some dazzling musical cues, some of them lifted directly from On Her Majesty’s Secret Service (commonly regarded as the series zenith) and Louis Armstrong makes a welcome return to the series, some 50 years after his ballad was first issued. Blade Runner 2049 (Denis Villeneuve, 2017) composer Hans Zimmer does an excellent job of incorporating a certain menace into the jangly Bond theme, and Billie Eilish’s theme tune is certainly the most hummable, possibly the most memorable, in recent times.

As you’d expect from Bond, the action comes quick and steadily, except this time it’s Bond doing much of the escaping, whether plunging breezily into Cuban waters, or driving a scarcely polished car in and around the Norwegian forests. Bond is far less buoyant than Swann, and he’s a joy to watch bulldozing into more peaceful terrains, where slumber and sanctuary have always eluded him. However, Swann does get her big moment, highlighting the frailties of both her captor (Safin) and former lover (Bond), calling them out on their imperfections and indifference. In a world of heavy handed men, it takes a collected woman to bring sense into the unhinged violence. No quips, no catchphrases, just perception, persuasion and clarity.

But as brilliant as the acting is-or as jaw dropping the stunts are, not least the opening stunt on an Italian bridge- the film still feels comparatively slight to what has come before it. Craig might be brooding, but it’s little different to the performances he delivered in Quantum of Solace (Marc Foster, 2008) or Skyfall (Sam Mendes, 2012).More than that, he certainly doesn’t have the spring in his step that he had in Spectre. And there’s no escaping the fact that the film doesn’t hold the swaggering confidence of Casino Royale, Craig’s first and best outing as Bond. In this new world, in which we’re living, there’s simply no room for failure, and although Craig goes out with a bang, it’s perhaps not the fire-work display we were expecting.

No Time to Die is in cinemas across the UK on Thursday, September 30th. On most VoD platforms in June.