If there is one thing I’ve learned over the past few years – during my many hours of binge-watching Korean cinema – is that when it comes to filmmaking, they can certainly mix it with the best of them. But the horror genre is where the country might just shine the brightest. Over the years we have been treated to great horror films like the fantastic, The Wailing (Na Hong-jin, 2016), or Train to Busan (Yeon Sang-ho, 2016), and going back a little bit further even to A Tale of Two Sisters (Kim Jee-woon, 2003). All of them are very different, but each of them is jammed packed with excitement, genuine terror, and an atmosphere that will leave you on edge long after they have climaxed. Midnight (which is the debut feature from Kwon Oh-seung) is another extremely individual film, lacking in actual deaths and violence, but harnessing the power to unsettle you perfectly.

Midnight isn’t a horror in the usual sense; there are no jump scares or and it isn’t laden with gore-filled moments, but it is thrilling to its core, leaving you in nervous suspense for most of the film. It also breaks the conventional aspects of a serial killer horror film by revealing the killer from the very beginning and continuing to use them throughout the story. Look back at all those serial killer films of old, as the antagonist sends their would-be assailants on a wild goose chase whilst hidden in the shadows, but this film doesn’t follow suit and it’s very refreshing.

The ruthless serial killer in question is Do Shik (Squid Game’s Wi Ha-Jun) is seen eyeing up his prey during a dark and sombre night in the streets of South Korea. A young deaf girl, Kyung Mi (Ki-joo Jin) soon scuppers his plans for a successful stalk by meddling in the killer’s plans. A chase ensues and the girl must run for her life and save that of her mothers, as this suave and meticulous predator begins to edge closer and closer to his end goal. The performances from these two worked incredibly well together as they battled long into the night. Wi Ha-Jun portrays the killer with a superb arrogance that makes him slightly likeable – an uneasy charm is what a lot of infamous killers like to flaunt. Whereas Kyung Mi has such raw and unhinged emotion at times, but it’s built with determinedly strong foundations.

The representation of deaf people was well thought out and respectful, portraying these characters with certain ailments but also highlighting those unique survival instincts that inevitably save the day. As the critically acclaimed CODA (Sian Heder, 2022) recently won the Best Picture at the Oscars, and with Sound of Metal (Darius Marder, 2021) still fresh in the memory, it is fitting to see another aspect of the deaf community – a much different one – as they enter an extreme fight for their lives. 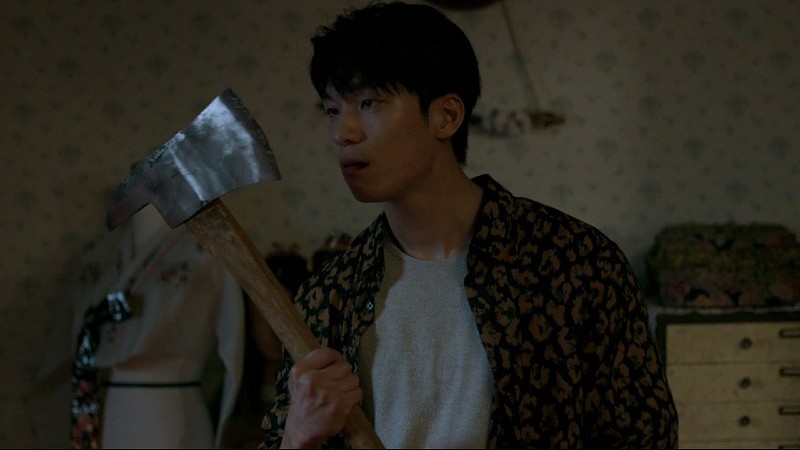 The sound design is one of the crowning achievements of this film, it adds an authentic feature to the film; as the noise begins to soften and the utter silence shudders the area, it puts us in the shoes of the woman – anything can happen, neither of us knows what, we can only assume the worse and react on impulse. These women cannot hear cries for help, their own rustlings, or the killer sneaking behind them, as a scary and stark realisation soon creeps up.

Midnight is breaking new ground, but it is a slick little horror film that doesn’t become bogged down by too many ideas; succeeding by keeping it small and nailing everything it set out to achieve. It feels like a modern-day slasher film but one that isn’t reliant on the “slasher” parts, or the cheesiness associated with these films. Midnight is far more focused on the atmosphere and the electrifying chase, both of which are invigorating. It is also heart-breaking as well as you see this girl beg for her life, trying to reason with a man who shows no remorse, he has no feelings and cannot – or chooses not – to understand her.

It’s unusual for a horror film to have only one on-screen death – the killer isn’t actually very successful at what he does – another reason why this is unconventional horror is more akin to a fast-paced chase thriller than a Halloween film. It was intense, situating you in a very unnerving environment, consisted of solid acting with a range of emotions, and there was even a twist to keep you guessing right up until that safe moment of clarity – keeping it mysterious and exciting is always a difficult task to achieve.

Midnight is out on VoD on Monday, March 14th.