This is the second mainstream film to come out in the past couple of years that focused on the deaf community (a family on this occasion) after the brilliant Sound of Metal (Darius Marder, 2020). It is just as good, if not better. These two films specifically are so meaningful because they revolve around music, it results in a much more powerful film with such fantastic meaning. If CODA doesn’t make you well up, then you have a heart of stone, okay?

The acclaim CODA has received over the past year has been overwhelming, with it making many critics top 10 lists (mine included) and it’s difficult to argue against anyone’s thoughts – a universally lauded film. So, when the Oscar nominations came around, there were high hopes for CODA, and as expected, three big nominations were coming its way. It is up for Best Picture, Best Supporting Actor for the talented Tory Kotsur (more of him later), as well as Best Adapted Screenplay for Sian Heder. There’s an outside chance of three wins.

CODA stands for Child of Deaf Adults. The film revolves around a girl called Ruby (Emilia Jones), an able hearing teenager who lives with her deaf parents and deaf older brother. She must juggle working on her dads fishing boat – acting as an interpreter for him as well – and her dream of becoming a singer, which is quite ironic as her family have no idea how good she really is.

This American comedy-drama directed by Sian Heder is an English language remake of the French film, The Belier Family (Éric Lartiga, 2014), a film which received a bit of backlash due to it casting able hearing people for the lead roles. CODA rectified this by casting deaf actors.

The film was lauded for its performances, and all four members of the Rossi family were special. Newly Oscar nominated Troy Kotsur plays Frank Rossi, Daniel Durant is Leo Rossi and former Oscar winner Marlee Martin (for Randa Haines’s 1987 Children of a Lesser God) plays Jackie Rossi. The magnitude of Kotsur’s performance is outstanding. 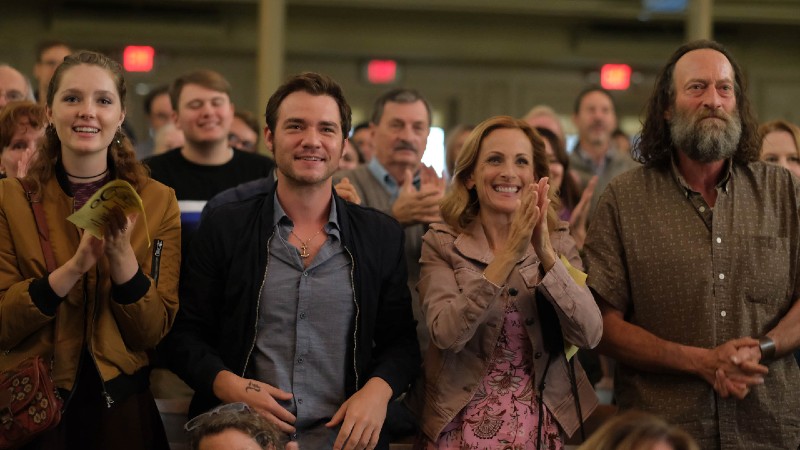 CODA begins by introducing us to the Rossi’s who live in Gloucester, Massachusetts, they run a struggling fishing business and barely scraping by. Ruby is the only able hearing person in her family, she helps them fish and interprets for them as well when she isn’t in school. The family struggle to sell their fish for a good price – often being short-changed by the ruthless fishing industry, with Ruby needing to do most of the negotiating on behalf of her dad.

Ruby joins the choir, much to her parent’s surprise, and she hopes to strengthen her passion for singing (and she has a wonderful warble; perhaps being Aled Jones’ daughter will give you that gift) as well as developing a crush for her future singing partner Miles – one of those typical awkward teenage crushes’. The choir and the lure of a possible scholarship could be her ticket out of this town and towards greatness, and like her teacher Mr. V says, “You don’t sound like sand and glue” which is a great compliment to be fair, and little reference to Bob Dylan’s vocal… talents.

The writing is powerful and emotional, projecting itself through the heavy exchanges. It sends a meaningful message about the perception of deaf people. It also dances around the idea of selfishness and ignorance, just because Ruby’s parents can’t physically hear her talent, does it make them these things? The sound editing is impactful and ingenious, much like Sound of Metal. When the silence fades in and out of Ruby’s performance, it creates a great sadness for her family. That’s because they cannot enjoy her gift like everyone else can. An unbelievable sequence for our viewing pleasure.

There is something magical about films highlighting deafness as a gift instead of a hindrance, specifically targeting ignorance and a lack of knowledge about the subject. Of course, deaf people do miss so much, but they also see the world from a totally unique perspective. This is both beautiful and eye opening.