"Dirty gem"
A nightmare train journey becomes a tale of human connection in this intriguing European co-production - on all major VoD platforms on Friday, May 6th

This Cannes Grand Prix winning drama is set in Russia, which may not be the most appealing proposition at the moment. However, beyond the location, it is very much a Pan-European film, having been co-written and directed by Finnish filmmaker Juho Kuosmanen, based on a novel from her compatriot Rosa Liksom; co-produced by Russian, Finnish, Estonian and German companies. A fine example of international co-production that may be less possible in the future.

Compartment No. 6 early moments seem like the set up for either a horror film or a romantic drama. Finnish archaeology student Laura (Seidi Haarla) is travelling from Moscow, where she studies, to the city of Murmansk over 1,000 miles away to study Petroglyphs (rock drawings to you and I). The epic train journey is made more difficult when her girlfriend, a literature professor, pulls out of the trip at the last minute, with excuses that signal all is not well. Confused, Laura boards a sleeper train filled with rude staff and crowded facilities, to be greeted by her compartment mate Ljoha (Yuriy Borisov). A Russian miner travelling for work, he drinks too much and harasses Laura, who initially does anything to get away. As the journey goes on, however, the pair find an unlikely bond.

Were this made in Hollywood, Ljoha would either become a nightmarish predator or blossom into a romantic lead. Under Kuosmanen’s direction, the story is far more interesting. Through Laura, we see the isolation of living in a place without being “from there”, as fellow passengers assume she is a tourist and make assumptions about her nationality. The story is set pre-smartphone, somewhere in the ’90s judging by tech and cultural references. Laura uses stops to call her girlfriend from a phonebooth, and films messages on a camcorder to be discovered later. These are interesting devices to compound the isolation and force our leads’ confrontation, in a way that wouldn’t be possible if the wifi was working. 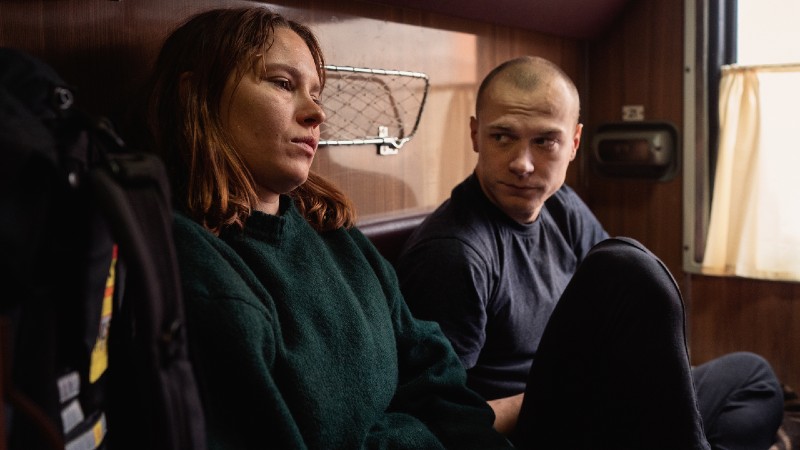 The plot progression may be slow, but the character development certainly isn’t. We’re invited to spend time with this unlikely duo, rather than wonder where the story is heading, and by the end they feel truly three dimensional. Borisov is fascinating, using our initial assumptions from his ugly, drunken introduction to blindside us later on. Beneath the swearing and toxic hostility is a very vulnerable man, curious about his travelling companion in a way he never seems equipped to express. This animated portrayal allows Haarla to be more considered. Laura is cautious around Ljoha, but rolls with his verbal jabs and uses her intellect to give some back (when he asks her the Finnish for “I love you”, she replies with the translation for “fuck you”).

Rolling to a stop and refusing to offer neat conclusions, Compartment No. 6 is an intriguing character study about our need to keep going, even if the reasons for carrying on aren’t all that clear. Well-acted and directed with care, it’s a dirty train ride with a lot going on beneath the surface.

Compartment No. 6 is in cinemas and also on Curzon Home Cinema from April 8th. On all major VoD platforms on Friday, May 6th.