"Dirty gem"
Deep dive into the headspace of a metal drummer gone deaf, in this finely crafted American drama with an impressive sound design - in cinemas and VoD

This is one of the very best films to come out during the pandemic—in fact, because of the pandemic the film probably has had a bit more attention than it normally would have, as in a crowded year it could have been lost in the shuffle. It’s a small movie with two known actors, but no huge stars. It would have had some acclaim in any case, but circumstance has luckily gained it more of an audience.

The film has an unusual genesis: it came out of a project that director Derek Cianfrance had been working on for quite some time about a metal drummer who goes deaf. It was called Metalhead at the time, but The Place Beyond the Pines (Cianfrance, 2012) co-screenwriter Darius Marder took the project over as his feature film debut and changed the name. Sound of Metal stars Riz Ahmed as Ruben Stone, a young man who is the drummer for a metal/punk band called Blackgammon, and his girlfriend and bandmate Lou (Olivia Cooke). Ahmed is best-known as the lead in Four Lions (Chris Morris, 2010).

Ruben and Lou are living a hand-to-mouth existence in a caravan, traveling around the US and playing gigs. Suddenly, most of Ruben’s hearing is gone. He sees a doctor, and finds out that he is rapidly losing his hearing and will become deaf. Cochlear implants may help, but his insurance doesn’t cover them. His doctor suggests eliminating all exposure to loud noises, advice that the initially doesn’t follow. He is also a recovering drug addict. His girlfriend eventually finds a rural shelter/recovery place for deaf addicts. He is very reluctant to go, but Lou basically ditches him there, and he has to come to terms with his deafness. 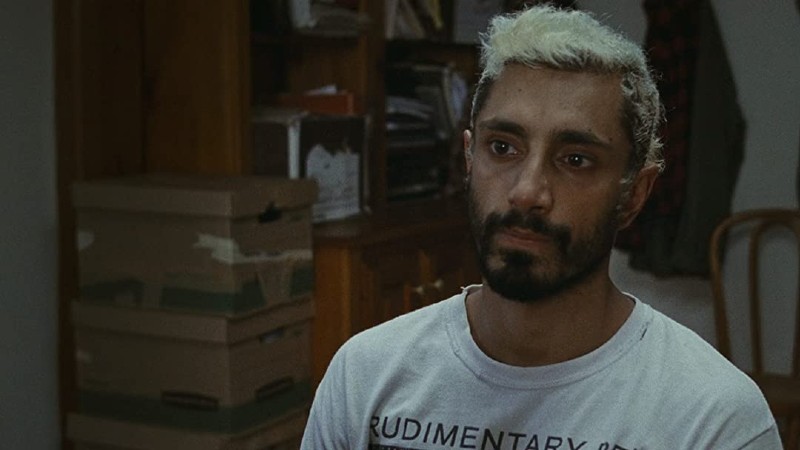 Both leads are outstanding. Most of the acclaim has been for Ahmed, but Cooke is a talented young actress who delivers an electrifying performance. The actress is barely recognisable. She shines throughout, particularly in a reunion scene near the end of the film. Stage, television and film actor Paul Raci plays a deaf Vietnam vet who runs the shelter. Raci was himself a Vietnam veteran and is also the son of deaf parents, making him fluent in ASL. The perfect fit for the role. He may be in his 70s, but he’ll be getting a lot more work after this, the biggest role he’s ever had in a film. Unsurprisingly, he earned a Best Supporting Actor Oscar nomination. Veteran French actor Mathieu Amalric also turns in a good performance as Lou’s father.

The film has a fantastic sound design that immerses you into the headspace of Ahmed’s character – it will probably win best Sound Design at the Oscars. I would be very curious to see what it’s like in a cinema. The sound drops in and out, and you definitely feel what it’s like to have those implants, which are not necessarily pleasant. Sound of Metal is very clever. It expertly uses subtitled ASL in selected scenes once Ruben learns sign language. To boot, the ending is flawless, giving the film an effective and unsentimental payoff.

The dazzling colours of British-Pakistani rap

The American-Pakistani director of Mogul Mowgli talks about his second feature film, the story of a rapper having grapple with a very unexpected enemy within [Read More...]