"Greasy movie"
This loud and boisterous k-horror is certain to damage your hearing and blur your vision with its unrelenting and multimyriad gimmicks, if you can spare 150 scary minutes of your life - now also available on Netflix

A feast for the senses awaits you. The Wailing will give you goosebumps, make you cringe, jump from your seat, cover your eyes, close your ears, hoot, holler and wail. All ingredients of an effective horror flick are there, plus a few exotic spices: demons, ghosts, zombies, exorcism, mysterious diseases and panic, all of that set in a remote small town in South Korea – the location per se is an alien experience for horror fans more used to Western landscapes and urban environments.

A mysterious and reclusive Japanese man (Jun Kunimura) lives in a secluded house in the mountains near a little village. An outrageous disease spreads in town, turning the infected into murderous scaly zombie-like creatures who eventually die in agony on their own. The clumsy police officer Jong-goo (Kwak Do-won) investigates the case, and he hires a Japanese interpreter and a shaman to support in his bizarre quest. To his despair, his feisty young daughter soon begins to display symptoms of the disease. The clock for solving the case and thereby saving the not-so-innocent young girl from impending death is ticking very fast.

There’s enough gore, scares and twists to keep your hooked for the duration of a normal horror movie, but perhaps the duration of 150 minutes was a little too ambitious. The helmer Na Hong-jin is indeed very inventive, but sometimes a little too much, making the plot a little convoluted and difficult to follow. Also the imagery is very dark, which probably works well inside the cinema, but might give you a hard time if you are watching the film at home. 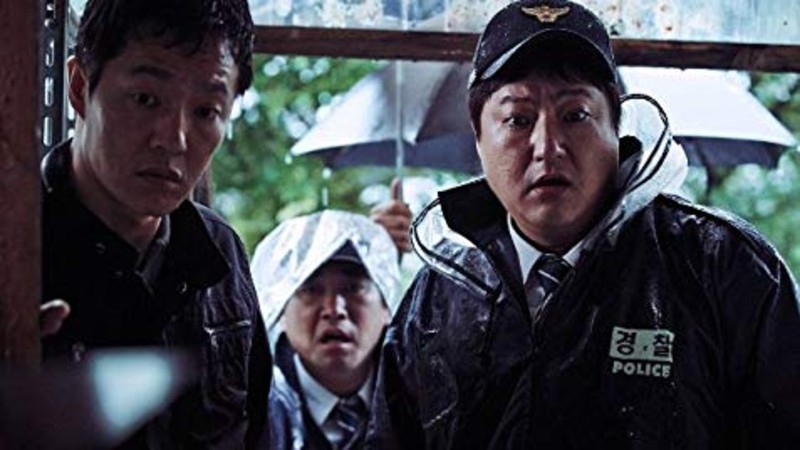 Special praise must go the sound effects of the film, with every little detail being loud and clear: the steps, the page of a book being turned, the growling, the screaming, the punching, the gushing, the whacking, the slicing, the crunching – I can only commiserate with all the numerous innocent watermelons tortured by the sound engineers. The acting is also convincing, particularly the young daughter – the energetic protagonist of the most frenetic and colourful exorcism you will see in your entire life, with plenty of drumming and animal sacrifice. Linda Blair must be green with envy. Greener even.

The film also has a political side to it, with an ambiguous and menacing foreign neighbour who stealthily moved in. It is no secret that the Koreans resent Japanese Imperialism, which is here personified by this evil man. The locals use the pejorative “Jap” to refer to him (I must confess my Korean isn’t good enough to establish whether the original term in Korean has the same offensive connotation). Reconciliation with your neighbours isn’t that straight forward at all, it seems. But is he really evil and has he been wronged? Do these “Japs” have a good heart after all? Just watch the movie and find out!

The Wailing is out on DVD and Blu-ray, and you can also view it online at on Amazon. It’s also on Netflix, in 2020.

A hypnotic experience that suddenly descends into eco-horror, Lorcan Finnegan's new film will grip you from the very first minute - out in cinemas this weekend [Read More...]