"Dirty gem"
An important corrective to the historical record, Brazilian documentary reveals how the mainstream media fomented civil disorder in order to topple the left wing - on October 20th at the ArtHouse Crouch End, in partnership with Jeremy Corbyn's Peace and Justice Project

We can’t watch everything all the time. In a moment when the consequential events seem to be happening with the regularity of a helicopter blade rotating, we need the media not only to tell us what is going on, but to prioritise, to filter and to interpret. Our understanding of present day events depends upon the veracity of a functioning media and – for all the pizzazz of the internet – most people still consume their news from the television. It is here that history is written in the present tense. So when Operation Car Wash succeeded in imprisoning ex-President of Brazil Luiz Inácio Lula da Silva and ousting the then sitting and democratically elected President Dilma Rousseff, I – along with many other foreign onlookers – assumed that this was a case of endemic corruption. Another hero with clay feet. Power corrupts etc. So it came as a surprise when in Victor Fraga and Valnei Nunes’s documentary The Coup d’État Factory referred to the ousting of Dilma in 2016 as a coup. Something had been going on. And the answer is TV Globo.

The Brazilian TV station is a national institution with its flagship news programme Jornal Nacional is part of a media empire which includes radio, newspapers and magazines, as well as an online presence. Fraga and Nunes’s documentary unfolds how from the earliest days, the Globo empire has fomented and at times invented civil disorder in order to caFter for the interests of parts of the political establishment. This began with a roulette table being placed in a city square in Rio de Janeiro and then the crowd was photographed as evidence of the licentious lifestyle of the people: a situation entirely provoked by the newspaper itself.

Further interventions involved the daubing of any progressive forces with the accusation of communism and the promotion of the military and the conservative values of the right wing. In the present day, the destruction of the Workers Party and the legacy of President Lula involved a barrage of insistent negative press and collusion between the media and the justice department who were pursuing the case. The flimsiness and at times non-existence of evidence was made up for with a war of memes and specifically the portrait of Lula in prison garb which prefigured Donald Trump’s chants of ‘lock her up’ in the 2016 election. The 2016 ousting of President Dilma was a coup which used a weaponised prosecution on a technicality and TV Globo carried the prosecution case live as rolling coverage and then returned to regular programming for Dilma’s 12 hour rebuttal. 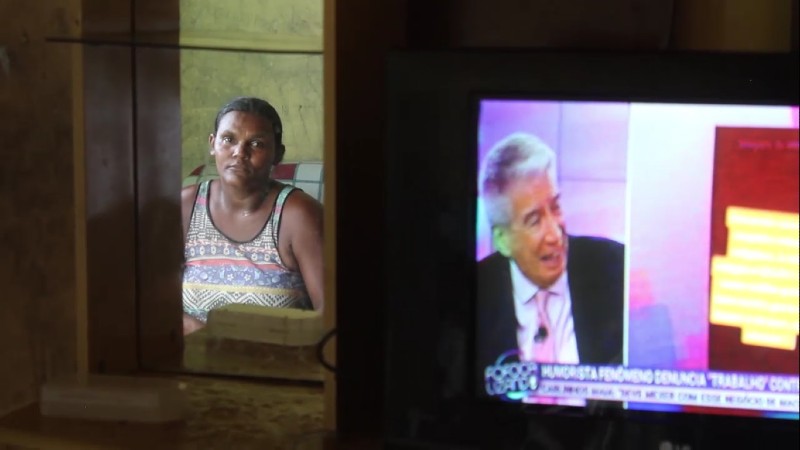 With such a damning case against Globo it is unsurprising that the documentary filmmakers have not been allowed to use any assets from the Globo network, but they manage their way around this restriction and in doing so perhaps make a better documentary for it. Using artists animation to re-enact scenes they have also gathered a convincing roster of witnesses including president Dilma Rousseff, journalist Glenn Greenwald, Nobel prize laureate Adolfo Perez Esquivel, Human Rights lawyer Geoffrey Robertson QC and iconic musician Chico Buarque, who along with Francisco El Hombre, Josyara and Erika Nande also provide the soundtrack. The documentary is both an important corrective to the historical record and an effective polemic. It is a vital contribution to the debate within Brazil, but also a primer for those – such as myself – whose understanding has been relatively superficial.

There is a keen irony in the fact that Globo’s interference has led to the rise of Jair Bolsonaro rather than the intended centre right candidate. TV Globo’s lack of diversity has also led to an atmosphere in which the violently misogynistic, homophobic and racist populist has come to power. To paraphrase a much maligned German economist, the media make history but they don’t necessarily make the history they want.

The Coup d’État Factory saw its world premiere at the Havana Film Festival in December 2021. The film premieres in the UK in May at a special BFI screening. Several further screenings have been held in the British capital since, including two as Sands Studios, and two in partnership with Jeremy Corbyn’s Peace and Justice Project.

Click here in order to watch The Coup d’Etat Factory on VoD.

DMovies is the production company behind The Coup d’État Factory. The film director Victor Fraga is the editor of this portal.

The Brazilian melting pot at boiling point: Brazil has a long tradition of welcoming refugees and immigrants from all over the globe; this unusual blend of documentary and fiction exposes the wounds of these people as well as and the woes of the nation in a very urgent moment - showing in London [Read More...]