Brazilian filmmaker Petra is roughly the same age as Brazilian democracy. She was born in 1983, just two years before the military dictatorship that ruled Brazil for more than two decades came to an end. She thought that herself and Brazilian democracy would be standing strong in their thirties. this, that did not materialise. While the filmmaker is now an accomplished filmmaker, now on her fourth feature film, Brazilian democracy has collapsed, and the country is now on the verge of authoritarianism.

It’s very concerning that a democracy is far more vulnerable than a single human being. In the case of Brazil, however, it’s hardly surprising. The country’s history in punctuated by successive coup d’etats and periods of military rule. The elites have consistently found a to cling to power and maintain their privileges, in a country built upon a tradition of slavery and profound social divides. That’s why Brazilian democracy is frail and sickly.

In the first half of this two-hour money, we see the Brazil of Petra’s dreams materialise in the hands of the Brazilian Worker’s Party (PT), which won four consecutive presidential elections (two with Lula, in 2002 and 2006, and two with Dilma, in 2010 and 2014). We learn that Lula lifted 20 million people out of poverty and catapulted the Brazilian economy from the 13th to the 7th place in the world. Dilma continued his social policies, however she confronted the market by lowering the “perverse” interest rate. She was generally a less able politician than her predecessor, it is claimed. She was cold and lacked human skills. A member of parliament complains that “she never hugs anyone”.

In 2016, a parliamentary coup d’etat took place in Brazil, with Dilma being removed due to an accounting technicality, which the Brazilian constitution does not qualify as an impeachable offence. This is when Petra’s dream began to collapse. The director is connected to Dilma in more ways than one. Petra’s mother and Dilma were tortured in the same building a couple of years apart. Dilma was under torture for 22 consecutive days. She described her technique for enduring such pain: “I convinced myself that it was all going to be over in one minute or two, over and over again”. We then see a black and white photograph of Dilma on trial, snapped immediately after the torture (pictured below). Her tormentors cover their face, while Dilma sits up with a firm gaze exuding strength and confidence. This single image became representative of Brazilian staunch resistance. 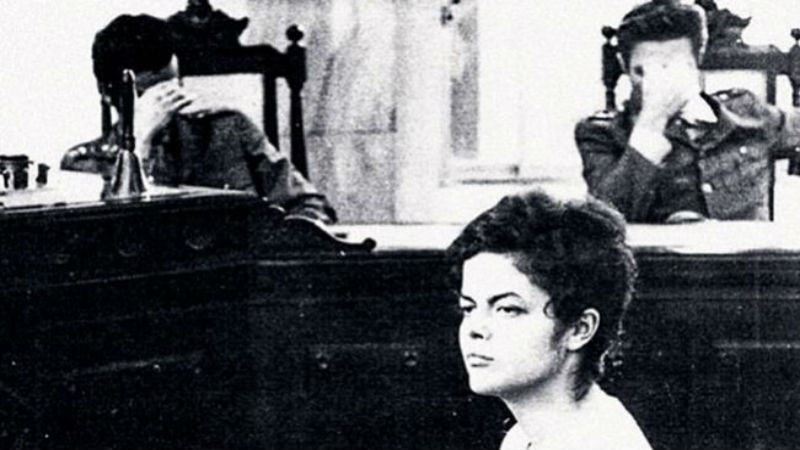 Next we see coup-plotting president Michel Temer take office. Petra looks back images from Dilma’s first inauguration (in 2011) with Temer and Lula next to her (pictured at the top). Temer’s body language, with tense and fiddly hands, suggest that he was very uncomfortable in his position, and secretly mulling how to take over. We learn that Dilma never picked him to be her vice-president. PT’s coalition party PMDB chose him Lula explains the reason for such unorthodox alliance: “if Jesus came to Brazil, he would have to work with Judas”.

In 2018, democracy continues to collapse. The imprisonment of Lula – the runaway favourite to win the 2018 presidential elections – constituted the second part of the 2016 coup. He clarifies: “there’s no way that they [the elites] would work so hard to get rid of Dilma and let me win a few years later”. His high-speed trial was shambolic and Kafka-esque, without any evidence of wrongdoing, conducted by a judge called Sergio Moro. Lula’s UN lawyer Geoffrey Robertson QC says that the problem with Brazilian justice is that the same person who investigates is the one who tries and sentences the defendant (a medieval practice long abolished in Europe).

Far-right member of parliament Bolsonaro consistently capitalises from the collapse of the democratic institutions. Voters filled with hate and anger of the Brazilian Workers’ Party turn to the authoritarian politician, who openly advocates dictatorship, torture and “banishing red” (ie making the leftwing illegal). With Lula being in prison, he proceeds to win the 2018 presidential elections. In the end of the movie, we learn that judge Sergio Moro became Bolsonaro’s Justice Minister (a horsetrading gesture in exchange for imprisoning his largest political opponent).

Petra’s short-lived dream became a nightmare in just three years. Democratic rule in Brazil was just an unusually long hiatus, with coups and authoritarianism being the norm. Interestingly, Petra is also connected to the reactionary forces that seized power in Brazil. She’s related to the Andrade Gutierrez family that helped to build the Alvorada presidential palace, and she’s a distant cousin of Aecio Neves, the defeated presidential candidate of 2014 presidential elections and and one of the masterminds behind the 2016 coup. To boot, some of her relatives voted for Bolsonaro, she confesses.

The young filmmakers is never afraid of taking sides. She understand that one’s personal history is intimately and irrevocably connected to their country’s history. The structure of the film – which blends archive footage, street images and a few interviews, and is entirely narrated by Petra herself – unabashedly celebrates the Workers’ Party, while also denouncing the dark and undemocratic forces that took over. Dilma and Lula are presented with a gentle music score. They are both candid and avuncular (contrary to the view that Dilma is callous and dry). The perfect uncle and the aunt for any loving person. The perfect mother and father for any democratic country.

The Edge of Democracy has just premiered at the Sheffield Doc Fest. It will be released on Netflix US on June 19th,with UK date still tbc. I commend Netflix for picking up such an incendiary and explosive documentary, that’s never afraid to make an unequivocal political statementas. Perhaps unsurprisingly, it warns its subscribers: “this film is… provocative”. Thank God for that!