"Greasy movie"
Michael Caine is a cranky writer on a tour from hell, in Canadian drama effusing a delightful charm and reminding us to never judge a book by its cover – opening the Raindance Film Festival 2021.

Just as a writer weaves a tale of fiction, so do people construct the narrative of their lives. We take licence with and embellish the truth, or as the cantankerous writer of Best Sellers would say, it’s “bullshite.” We’re all storytellers at heart, and director Lina Roessler and writer Anthony Grieco’s Canadian comedy drama is humorous and warm, a thoughtful reflection of the lies we tell one another.

Lucy Stanbridge (Aubrey Plaza) is desperate for a bestseller. Without one, she’ll be forced to sell the publishing house she inherited from her father. When she discovers an old contract that says the reclusive one time author Harris Shaw (Michael Caine) owes her a book, Lucy sees an opportunity to hold onto her father’s legacy. Dragged along reluctantly on a book tour to promote his new novel, the first in more than 40 years, she struggles to prevent Harris’s antisocial outbursts going viral. As the two grow closer, secrets threaten their newfound relationship.

The appeal of Best Sellers is the journey we watch these two characters go on, who discover they have more in common than they first know. Each are weighed down by their insecurities, but unlike Lucy who wears hers on her sleeve, Harris guards his vulnerability. 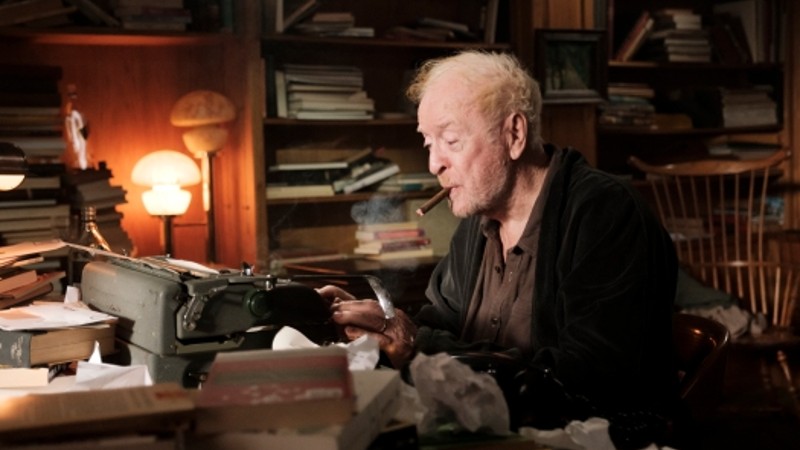 From a mutually beneficial transactional relationship, their financial motivation is matched with a genuine mutual respect that brings with it surprising choices. If the story has a message, it’s that a warmth can lie beneath one’s abrasive personality, which may just be a defence mechanism against one’s vulnerabilities. The question is whether we will take the time to peer deeper into a person’s soul to discover who they are? Or as the old saying goes, never judge a book by its cover.

Best Sellers effuses a good-natured spirit in part because of Harris’ lewd personality. When Roessler and Grieco finally decide to show his gentler side, it carries more emotional weight, but the lewd humour also guards against the story becoming too saccharine or sentimental. In the tough world of publishing where success is hard-fought, the story airs on the side of optimism, not realism. It’s offset with darker shades of tragedy and personal anxiety that gives it the genuine vibe of a story that hasn’t been conceived, so much as characters encountered.

If so much of our lives are spent telling stories or constructing narratives, what does this say about the way creatives are represented in stories? Are they has habitually cantankerous as we make out, or is it exaggerating the artistic temperament for entertainment purposes? Thinking about Grady Tripp (Michael Douglas) in Wonder Boys (Hanson, 2000), the writer creates a storm in a tea cup, and Harris is a violent storm that spills over the top and onto the saucer. Stories need their characters to be less than perfect, to confront some personal or professional struggle. Hence, stories lean with a prejudice towards the more devilish side of the writer, and yet, they still manage to show their better natures.

The banality and beauty of office work expertly intertwines in this absurdist filing competition comedy - from the Raindance Film Festival [Read More...]

In this probing confessional, a frightened Lebanese gay man makes peace with his past - documentary premieres at Raindance [Read More...]