Stephen Fry succinctly describes Britain most (in)famous gay activist: “Peter is a performance artist. He deserves an award for his extraordinary contribution to the lives of those who never heard of him”. The 90-minute documentary that follows, narrated by Ian McKellen and exec produced by Elton John and and his husband David Furnish, provides irrefutable evidence that the English actor is indeed right.

Peter Tatchell was born in Australia in a neopentecostal family, which he describes as “close to fundamentalism”. His stepfather was particularly controlling and homophobic. He feared his parents would report him to the police, at a time when homosexuality was a crime punishable with imprisonment. Peter moved to Britain both because of his family and because he wanted to dodge the compulsory military service, which was at odds with his strong anti-war views. He joined the Gay Liberation Front within just days of arriving in London.

An indefatigable Peter has taken part in every single London Pride since its inception in 1972. He also took part in the first East Berlin Pride the following year, the first such event in a Communist country. He joined an attempt to hold a Gay Pride in Moscow nearly four decades later, and was beaten by neonazis and the colluding police. Peter has injected the ideals and the methods of the American civil rights movement into the LGBT+ struggle, and ensured that the fight is not confined to national borders. 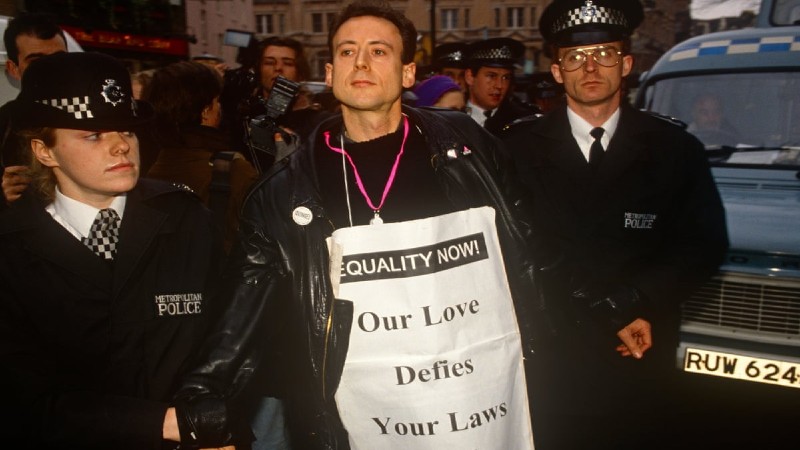 Despite being beaten approximately 300 times and left with permanent brain injury (affecting his memory, balance and coordination), Peter never shies away from a challenge. On the contrary. He confesses that he hardly basks in the comfort of victory before seeking a new battle. Defeats too gave him more motor force. Losing the Bermondsey by-election in 1983 – in a bitter and overtly homophobic campaign – gave him more resolve to fight on. Peter thrives on the titular “hate”. He literally loves being hated. He plays down the physical violence he has endured: “I’m blessed in comparison to activists in Iran and Iraq: I have not been not tortured, imprisoned and killed”.

Peter’s demeanour in front of the camera – both from the talking heads interview with Ian McKellen captured exclusively for this documentary and the extensive archive footage – is calm, soft-spoken and dispassionate, almost deadpan. It is in stark contrast to his fiery activist persona, who breaks into a Catholic church mid-service and attempts a citizen’s arrest of torture-loving Robert Mugabe. Not all gay men approve of his tactics though. Some believe that such gimmicks have a negative impact on the LGBT+ struggle, and paint a bad image of the community. A thick-skinned Peter remains adamant: “We tried to play by the rules, it didn’t work. Now we are breaking the rules”. He is branded a “homosexual terrorist”, an epitaph he proudly wears on his sleeve.

Director Christopher Amos is Australian-born and British, just like his film subject. He combines a very extensive amount of archive footage with intimate talking heads of Peter and those who know him. Some love him, some hate him. Some love and hate him, both at once. Interestingly, the filmmaker also captures interviewees as they prepare to be interviewed, exposing the set-up structure and the cinematic apparatus. It’s as if the filmmaker was attempting to be as transparent as the movie protagonist.

The two most powerful moments come at the very end of the documentary. At very old age, Peter’s mother finally accepts his son’s lifestyle. And the Catholic priest whose pulpit he once stormed describes Peter as “a man of good”, and “on the right side of side of history”, before comparing him to Jesus Christ. Praise doesn’t come any higher than this.

Hating Peter Tatchell showed at the Raindance Film Festival. It is now available on Netflix.