When I am engaged in very boring work — whether it’s writing content about topics I have little interest in or filing out excel tables — I like to think that there is some kind of art involved. Despite the mundaneness of the tasks, it’s nice to believe that the sheer mechanics of creating the same thing again and again can somehow approach the sublime. It’s not really true, but it makes the work bearable.

All Sorts, a bumbling, lo-fi take on Office Space (Mike Judge, 1999), turns up this fantastic sensibility to a truly absurd degree. In Diego’s (Eli Vargas) job interview for the mysterious company Data-Mart, his erratic boss-to-be Vasquez (Luis Deveze) touts the power of typists — saying that no amount of monkeys could ever compose anything approaching a sonnet. Despite only being able to type over 50 words per minute, Diego is hired. The staffing shortage is real.

He is instantly launched into a world that is all too familiar to the average white collar worker: endless lines of cubicles, water coolers, bored workers and banal chitchat. One likes to tout the familiarity as a cover for its drudgery; falling into a routine rather than take a step back and analyse the meaninglessness of the work. Inside this Kafkaesque reality — where poor Diego has to trade several chocolate bars for a working computer — comes a modicum of hope in the form of co-worker June (Greena Park). 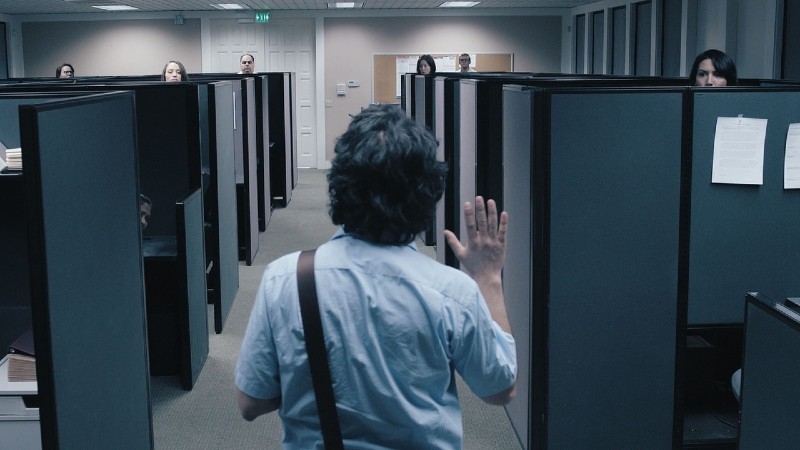 She’s an unremarkable person with a remarkable talent, able to file documents at a relentless, breathtaking pace. Given the rise of digitisation and online file-sharing within most offices, this is a skill with an ever-fading relevance – positing All Sorts more as a throwback to the office of the ’90s than today. Diego quickly recognises this skill and takes over as her manager, entering her into various underground filing competitions. Quickly, he falls in love with her, even as she is torn between him and her fiancé.

The skill of All Sorts is how it manages to wring genuine emotional connection out of this central relationship, even while surrounding it with so many oddball characters and absurd situations. I think it’s because even while it’s a comedy, it still takes the skill involved in filing seriously, understanding that the audience will only be invested if the film is too. Additionally, June and Diego may or may not end up together in the end, but the way they understand each other’s desires shows an emotional maturity usually foregone in such comedies.

While mostly a success, skilfully aping the tone and structure of mid-00s films such as Dodgeball (Rawson Marshall Thurber, 2004) and Blades of Glory (Josh Gordon and Will Speck, 2007), the film is somewhat blunted by the incessant musical score, a three-four piano melody that feels like Sims is loading somewhere in the background. The music isn’t necessarily bad, but its continuous deployment often drowns the film in unnecessary whimsy, overwhelming a surprisingly strong screenplay and touching emotional core. While scoring a film about the drudgery of everyday office life — and the way that love and fantasy can transcend such banality — the music sharpens the point a little too finely.

The timing of the film is apt, coming at a time when people are debating whether or not we need to actually be in an office to do our work; showing both the camaraderie and the confusion of sitting in the same space as strangers all day long. But I suspect for many remote workers, the film provides a jolt of nostalgia as well as a reason never to return.

All Sorts premieres at the Raindance Film Festival, which takes place between October 27th and November 6th.

Check out top five recommendations for the Raindance Film Festival, one of the largest showcases for independent cinema in the world, starting this week in London [Read More...]

He Dreams of Giants

Two documentarists register Terry Gilliam's own Quixotic quest during the completion of The Man Who Killed Don Quixote, revealing a resolute yet fallible artist - on VoD on Monday, March 29th [Read More...]