"Dirty gem"
Talk about a dirty movie; sex and violence abound in Paul Verhoeven’s lesbian nun odyssey, loosely based on a real-life story - on Mubi on Friday, July 1st

Benedetta Carlini (Virginie Efira) is a 17th-century Italian abbess imprisoned for having an affair with another nun (Daphne Patakia). A steamy passion project for the man who directed Showgirls (1995) and wrote a book about Jesus. It combines his specialist subjects – erotica and Christ – which make strange bedfellows in this transgressive cocktail of profanity, profundity and pornography. You know what they say about cloisters being an aphrodisiac…

Benedetta reunites the Dutch director with Elle (Verhoeven, 2016) screenwriter David Birke for another feverish French-language drama, in which Sisters are doing it for themselves. Set in a Tuscan convent, it sees Benedetta take the younger Bartolomea under her wing and into her bed, rising through the ranks due to her intimate communion with the sexy, sword-wielding Jesus of her venereal visions. Some call her a saint, others say she is conning the convent, all point towards a rapturous climax. Ever the agent provocateur, Verhoeven delivers nunsploitation that is not high art but certainly high camp, while indulging his habit for putting women through the wringer. 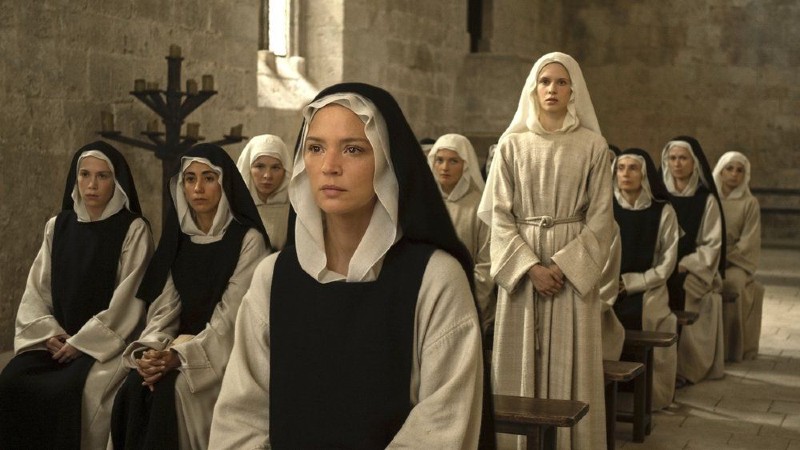 A rare glimpse into life in a nunnery (though no doubt the Vatican would deny its veracity), the picture features nuns fornicating, defecating and the most sacrilegious masturbatory aid since The Exorcist (William Friedkin, 1973), albeit at the service of a semi-serious film about religion. Verhoeven roundly condemns the misogyny of the Catholic Church by showing it in lurid detail, having his sacramental bread and eating it too. God knows subtlety has never been part of his bible, and the hot nun action definitely overwhelms any penetrating theological insight he meant to impart, since the main takeaway is the depressing thought that nuns are having better sex than you.

At 83, the Dutch movie director has lost nun of his audacity, throwing the funny, horrible and scandalous at the monastery walls to see what sticks. His outré style leaves little room for the dramatic nuance found in the conceptually comparable The Favourite (Yorgos Lanthimos, 2018), and the film runs too long at over two hours. The picture’s salvation is its ambiguity, questioning Benedetta’s authenticity as she becomes corrupted by power and develops a thinly-veiled Messiah complex, exploiting both Bartolomea and Christ in the process. This cynicism makes Benedetta weirdly compelling if less than empowering, but if you were expecting feminism from Verhoeven, you haven’t been paying attention.

Benedetta premiered in Cannes in July this year. It shows in the BFI London Film Festival in October. In cinemas on Good Friday, April 15th. A very holy experience indeed!

On Mubi on Friday, July 1st.

Weimar Lesbian classic entirely made and acted by females excels in audacity and is chillingly prescient of the ensuing Nazi horrors - on Blu-ray, DVD, iTunes and Amazon prime on Monday, March 8th [Read More...]