"Dirty gem"
Verhoeven's latest movie is a sensual ballad of visceral sex and dysfunctional relationships, elegant in its eccentricity and deliciously repulsive in its pathology, starring Isabelle Huppert - now on BFI Player

In Paul Verhoeven’s twisted world, dysfunction in the norm. His latest morbid sex thriller is a strangely tasteful return to his famous 1992 classic Basic Instinct. This time, instead of young Sharon Stone he picked the 64-year-old French actress Isabelle Huppert, best known for her seedy and disturbing movie characters (such as the sadomasochistic Erika in Michael Haneke’s The Piano Teacher, 2001). The outcome in explosive.

Here she plays Michèle Leblanc, the director of a gaming business and the daughter of serial killer. She still resents her divorce, and she also has a very difficult relationship with her son and daughter-in-law. Plus, she slams her mother for wanting to marry a rent boy decades her junior. At work, she is loathed for her assertive and obstinate demeanour. Oh, and she has an affair with her best friend’s husband. Everyone around Michèle seems to have equally unorthodox relations. Betrayal, voyerism and abuse are the fuel for love and romance. And everyone seems to be happy about that. 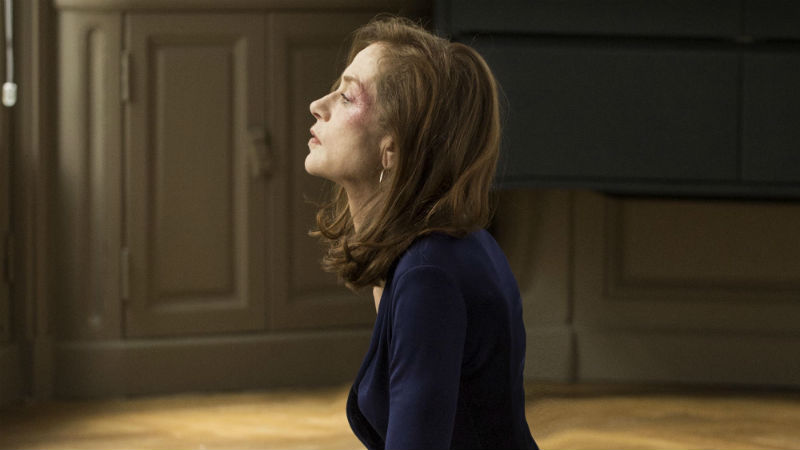 Michèle is raped by an assailant wearing a ski mask in her own home repeated times, but she decides against calling the police. Despite the fact that she resists her rapist, there’s always the suggestion and she is finding pleasure in the violation. Viewers will wonder whether this is merely a dirty seduction game. Some feminists are certain to cringe at this film, at the idea that some women secretly wish to be raped. Does Michèle enjoy when the stranger enters her house? And does she enjoy it when he enters her body? The scenes are very erotic, and there’s even a quick vulva flash, very much à la Sharon Stone. Huppert is a very fit and sexy sexagenarian. Let’s just hope at least the director asked for the actress’ consent this time!

Feminists don’t have a cosy relationship with the Dutch filmmaker since Basic Instinct. That’s not just because of the vulva, but also due to the negative portrayal of a lesbian – depicted as a confident sexual predator. The lewd, voyeristic and heterosexual male gaze is prevalent in both Basic Instinct and Elle, but this doesn’t make them misogynous. Everyone in the film is either a perpetrator or a blithe accomplice of erratic sexual behaviour and dalliances. Verhoeven’s gaze is so twisted that it’s hardly human; it’s instead an allegory of the absurd, served with an exquisitely charming finish.

The film is also a natural fit for the French actress. Michèle here is a proactive sadist, just like Erika (Huppert’s character in The Piano Teacher). But instead of placing broken glass in the coat pocket of a talented student, here she crashes into her ex’s car and places a toothpick into the food of his new lover. It’s almost as if Verhoeven created the role specially for Isabelle Huppert after watching Haneke’s film. 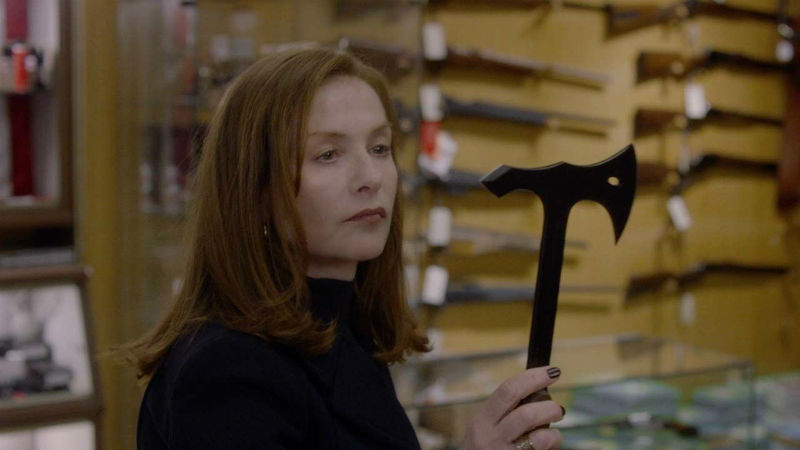 Elle is a gutural experience. There’s blood everywhere: on the head, on the leg, inside a syringe or the bath tub. Blood here is doubly representative: it’s both the pathology (as in being ill with a disease or giving birth) and the violence. At one point, Michèle suffers a car accident and has to walk around with a leg brace, but that doesn’t stop her being raped again. Michèle and her assailant have a libido akin to the characters of Crash (David Cronenberg, 1996), with the car wrecks et all.

Strangely enough, the surviving characters find redemption at the end of the movie. Someone says: “he was a good man, with a tortured soul” (we won’t reveal who as not to spoil the film), while donning the perfect smile, despite the horrific events that has just taken place. Indeed, people here seem to find happiness and closure under the most tragic circumstances. No one is bad, they just have a tormented existence. So let’s rejoice and celebrate our dirtiest fetishes and desires. Hip hip hooray!

Elle was out in UK cinemas in March, when this piece was originally written. It was made available on BFI Player in September.