"Filthy genius movie"
Weimar Lesbian classic entirely made and acted by females excels in audacity and is chillingly prescient of the ensuing Nazi horrors - on Blu-ray, DVD, iTunes and Amazon prime on Monday, March 8th

[dropca]F[/dropcap]our versions of this Weimar classic have been made since 1931. The acting in it is superb. The photography and angling of shots, especially round the great central staircase, which forms a centre-piece of the institute, is of a high order. The film is set in a girls’ school, which is, in effect, a military academy.

It opens with a line of girls walking with heads bowed in uniforms that look, with their stripes, alarmingly like concentration camp garb. This coincidence is a pure product of hindsight and was not intended by the original film-makers, yet it is strangely prophetic. Over it presides the terrifying principal (Emilia Unda), who stalks the corridors with her walking stick and what seems to be a military decoration over her chest. Not one man appears in this film, except a line of soldiers marching in the distance. The institute is exclusively female yet over it hangs a crushing patriarchy where the girls of “good” families are meant to be molded into the military virtues of their officer fathers.

Into this grim world comes shy, sensitive Manuela von Meihardis (Hertha Thiele) who cries at first but is not without spirit, who shakes hands with the school secretary Fräulein von Kersten (Hedy Krilla), instead of curtseying to her and tries to go up a forbidden staircase. Hedy Krilla gives a superb performance as the principal’s grovelling lackey.

Manuela meets another girl as she goes up the correct central staircase. Ilse von Westhagen (Ellen Schwannecke) tells Manuela how lucky she is to be in the dormitory where the gorgeous Fräulein von Bernburg (Dorothea Wieck) gives each of the girls a good night kiss. The “Kiss” is one of the highlights of the film. Fräulein von Bernburg slowly goes round the dormitory kissing each girl on the forehead, except that she gives Manuela a kiss on the lips. 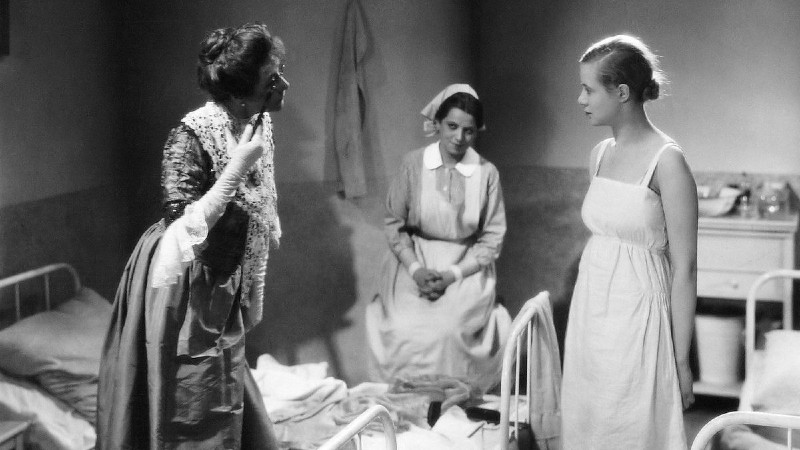 Both Manuela and Fräulein von Bernburg are lesbians. The special kiss sets off a storm of adoration and love in Manuela. When eventually a princess comes to visit the school, a celebration is held and the girls are given a powerful punch by the kitchen staff as a joke. Manuela gets drunk and lets out an embarrassing secret about her and Fräulein von Bernburg that is barely sexual but gets Manuela branded as a lesbian. The rest can be left unsaid as it leads to the climax of the film.

The film title was chosen by Carl Froelich, already a successful film entrepreneur of the Weimar era, who later went on to have a successful career under the Nazis. This caused problems. It does not take too much imagination to see why this was primarily a commercial decision. Lesbian schoolgirls in uniforms supervised by strict mistresses is one of the staples of male heterosexual fantasies.

However, the actual input into the film was entirely female. The atmosphere was set by the director Leontine Sagan and the stage play on which the film was based was written by Christa Winsloe, who drew on her own experiences of an aristocratic boarding-school education. Fräulein von Bernburg and Manuela are homosexual, but what about the other girls? – not necessarily. One of them is collecting pictures of male film stars, who have, as she says in English, “sex appeal”. Fräulein von Bernburg is no lesbian vamp going seducing excitable, young schoolgirls. She is a kind, sensitive woman, who takes a genuine interest in her young charges and is keen, indeed, to dampen down Manuela’s enthusiasm for her.

The achievement of this film is to contrast the innocent gay crush of a schoolgirl with its designation as “scandal” at the hands of an overbearing, dictatorial ethos, which will later turn into Nazism. At one stage in the film, one of the girls tells the others that her mother has written to her declaring that, “The Fatherland needs people of steel.” This contrasts eerily with the exact words of Hitler in the film “Triumph of the Will” who declared to a massed gathering of Hitler Youth in Nuremberg that he wanted the youth of Germany to be “as hard as Krupp steel”. This film not only has the innovative distinction of mentioning lesbian love but of explaining why Germany turned to Nazism.

Mädchen in Uniform is out on Blu-ray, DVD, iTunes and Amazon Prime on Monday, March 8th.