Human civilisation and time is scarred by our choices and indiscretions, some of which are so grave that we cast aside our very humanity. Kevin Macdonald’s American drama The Mauritanian, is the true story of one of these many scars that has been instigated by the “war on terror”, and the imprisonment without charge of Guantánamo Bay detainees by the U.S Government.

Based on the best-selling memoir Guantánamo Diary by Mohamedou Ould Slahi (Tahar Rahim), the film recounts his own fight for freedom, with the help of defence attorney Nancy Hollander (Jodie Foster) and her associate Teri Duncan (Shailene Woodley). Leading the prosecution is Lt. Colonel Stuart Couch (Benedict Cumberbatch), a formidable figure who uncovers shocking truths that brings him into conflict with the military and his own government.

A new film from Macdonald rightly stirs up interest, and his back catalogue of documentary and fiction makes the prospect of him tackling the subject of Guantánamo Bay an exciting one. Reflecting on the film, what immediately strikes me is an intriguing parallel with his documentary of mountaineers stranded in Touching the Void (2003). Slahi’s imprisonment, and his striking up a friendship with a fellow detainee he never sees face-to-face, juxtaposes man with nature as the respective antagonists.

Technically efficient, with solid performances, The Mauritanian is haunted by the underwhelming feeling it provokes. The suspense and urgency struggles to explode that sees it fall short of other captivating works of true stories, such as All the President’s Men (Pakula, 1976) and Spotlight (McCarthy, 2015). If it can be most aptly described as a sober account of Slahi’s experiences, this is ironically where the film’s strength lies. 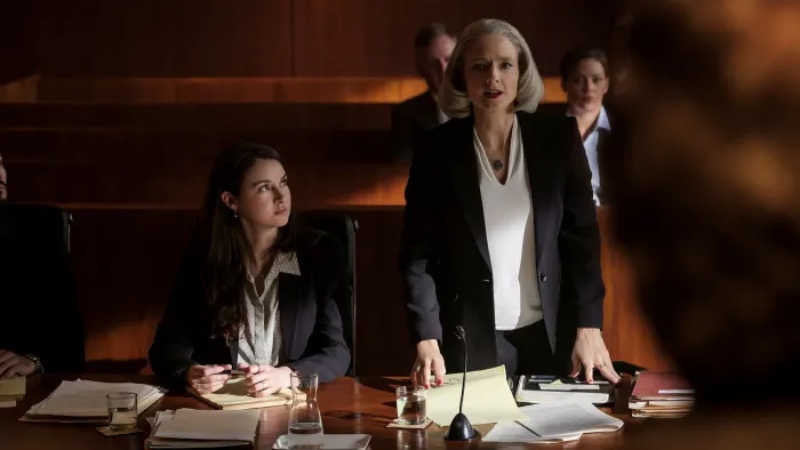 The expectation is for Foster’s character to be a tour de force, the injustice and bullying tactics of the government adding fuel to her fire. Instead she’s a more tempered presence, as is Cumberbatch’s prosecutor, neither spiralling into a dramatised idealism. It’s a choice that leaves us feeling that a part of the film’s soul is missing. The sobering restraint ultimately comes to pay tribute to the source material, in a way that can perhaps be likened to photographers who combine image with text to communicate ideas and meaning.

Throughout feelings are provoked, a mix of anger and sympathy, and we question his innocence as the two sides prepare for trial. It’s not until the end that the full weight of our indignation is felt. Macdonald depicts events that are dramatic, intense and uncomfortable to view. We see acts of torture that are in breach of international law, perpetrated against detainees who have not been charged with any crime. There’s a definite full stop as the director builds to a crescendo of condemnation, articulately tempered with facts in white text on a black background. The film was borne out of words on a page, and so it ends with words onscreen.

According to Amnesty International, “The Guantanamo prison remains open today with 40 men still imprisoned there. The vast majority have never been charged with a crime.” The text references that Slahi’s struggle for freedom ran into the Obama/Biden Administration, and to this day, Obama’s promise to close the Guantanamo prison remains unfulfilled.

The Mauritanian is not a look back at a past heinous act, it’s a window into the horrors being experienced by detainees as we are watching, thinking and talking about the film. There are those for who what we witness is their reality, human beings denied their dignity that continues to besmirch a contemporary America supposedly built upon the values of freedom and equality, a nation struggling to discover its soul.

Neither the entertaining compelling or suspenseful experience that one may expect, what the film does is trust its story will resonate with the audience as an experience recounted. Slahi’s story as shown here, is an experience we should value and appreciate, for it makes us conscious of the hurt we inflict upon one another, and the consequences that make victims out of men, women and children.

The Mauritanian is streaming on Amazon Prime

Udo Kier shines as a flamboyant queen in her twilight years in a small American town, in this endearing drama loosely based on a real story - from SXSW [Read More...]