Barbara Crampton is one of the classic scream queens from the ‘80s: she was in Re-Animator and From Beyond (Stuart Gordon, 1985 and 1986), among others. She also spent a long time on the soap The Young and the Restless, appearing from 1987 to 2007, and appeared for ages on The Bold and the Beautiful as well. In more recent years Crampton has gone back to her horror-film roots, acting in several films, acting as a producer, and currently writing a monthly column in Fangoria.

In Jakob’s Wife, she is a vampire experiencing a mid-life crisis. Ann is married to a small-town minister, Jakob (Larry Fessenden). She feels her life shrinking away, and by chance… becomes a vampire. The film is about the couple trying to stay together as dark forces try to pull apart their decades-long relationship. She meets an old friend, and something entirely unexpected happens. More twists follow. Monstrous rats (!!!) also play a very peculiar role. 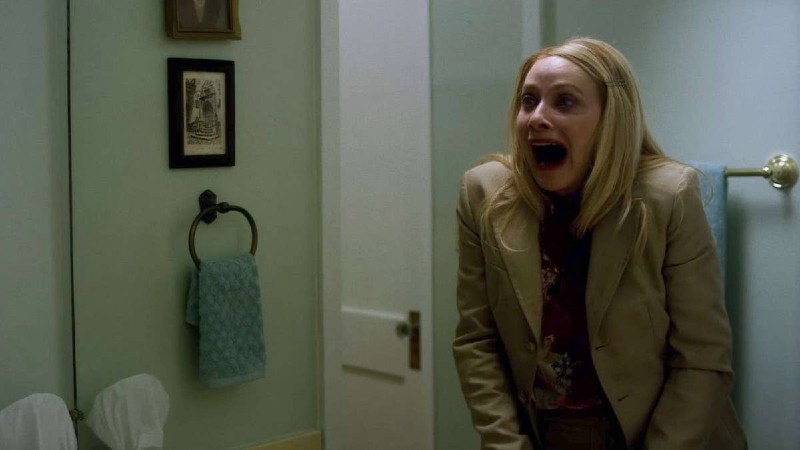 Crampton was no doubt attracted by her meaty role (pun intended). It’s one of her best performances. There is some really funny gore in a Sam Raimi/early Peter Jackson vein, but tonally it’s a bit confused. Nonetheless, Jakob’s Wife is entertaining. Silly for the sake of it. Crampton and Fessenden have worked together before, so they have a natural chemistry. It’s a film that picks up as it goes along, after a somewhat weak start.

This little odd movie was made to be watched in the cinema, with a boisterous audience. Otherwise, it loses some of the fun factor. Who wants to watch a horror comedy on their own, without a paying audience to laugh and scream along?