This stage adaptation of the Ridley Scott’s Alien (1979) premiered at the Allendale Community Centre in Rimborne, Dorset in 2013. It was highly entertaining. The play became such a news story that it ended up playing in the West End in London for one night. The amateur theatre group was made up of local bus drivers who had previously done mainly an annual Christmas panto. And then local family involved with the theatre group decided to stage Alien…

This documentary is a straightforward account of a community theatre group coming together against the odds to pull it off. At times it feels like a real-life version of Waiting for Guffman (Christopher Guest, 1997), a mockumentary about the amateur cast of a small American town musical production. Director Dave Mitchell takes on the complex challenge, which turned out to be a good choice—after all, Alien takes place mainly on a single set (the spaceship). The director’s son Luc did the script adaptation, his wife played Ripley, granddad was in charge of the sets. They tried to do the props and special effects as well as they could, including the chestburster.

The result is a charming documentary, a real-crowd pleaser that is also funny. It shows that – even with very limited funds and people who might be more interested in their smoke break than acting – you can inspire others and accomplish a lot. And you might even end up on the West End! There are lots of hilarious moments throughout, and no one is really quite right for the parts, which adds to the fun. Also under consideration were Quention Tarantino’s Pulp Fiction (1994) and Kill Bill (2003)…. 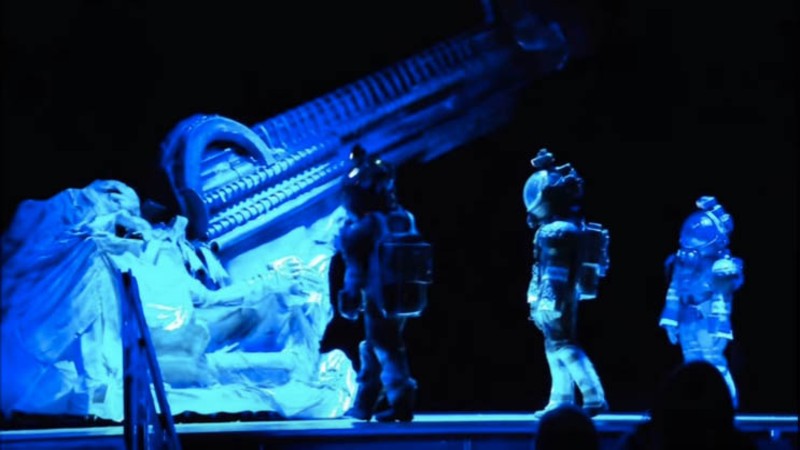 The crew comes up with a lot of creative solutions, and the way they make the Alien is very inventive. You see the triumphs and pitfalls of the whole production: they only did it a couple of times, and it’s not the most professional show even on its sold-out London night. The acting is really stilted, but they are having a good time, so they take the audience with them. In fact, the stage crew at the Leicester Square Theatre say it was their all-time favourite production.

The struggles and the solutions to special effects on a budget are both impressive and hilarious. A few years after this version there was a technically much more impressive attempt by a high school theatre group in New Jersey, no doubt inspired by the Dorset production.

It’s an entertaining watch, and for a festival that didn’t have much in the way of great films, Alien on Stage was a stand-out at SXSW. Audiences will definitely get a kick out of it when it’s released.

A detailed examination of the ideas and personalities behind Dan O'Bannon, H.R.Giger and Ridley Scott's classic 1979 SF shocker Alien is in cinemas and VoD [Read More...]