Few films can claim the authenticity of Sarah Gavron’s third feature. Let’s not give the director all the credit, though, because the creative team has stressed how Rocks was a passionately collaborative effort, drawing on the skills and experiences of its young cast, many of them first time performers. Together, this all-female production has made a superlative kitchen sink drama, echoing recent women-led projects like The Selfish Giant (Clio Barnard, 2013) and Girlhood (Celine Sciamma, 2014).

The film begins on a rooftop in East London, introducing us to Rocks (Bukky Bakray) and her friends, all of them Year 11 students at an urban secondary school. This small group counts several religions and ethnic backgrounds, but that’s all incidental to their effortlessly natural friendship. It is one of many moments where the girls just interact with each other, not to serve plot or character but to show the joy and playfulness of youth. In this case and many others, you forget that they are actors, such is the credibility of their screen presence, and this naturalism is met by Helene Louvart’s striking camerawork, which has a fly on the wall quality as it captures the girls at school, at home and on the streets.

Soon, a story takes form. Rocks, named as such for staunchly defending her friend Sumaya (Kosar Ali) against bullies, is left to care for her seven-year-old brother Emmanuel (D’angelou Osei Kissiedu) when her mum disappears, leaving a paltry sum of a money and a crumpled note explaining that she must “clear her head”. Afraid of social services, Rocks tries to operate as usual, placating her cheery but demanding brother as best she can until her position finally becomes untenable. 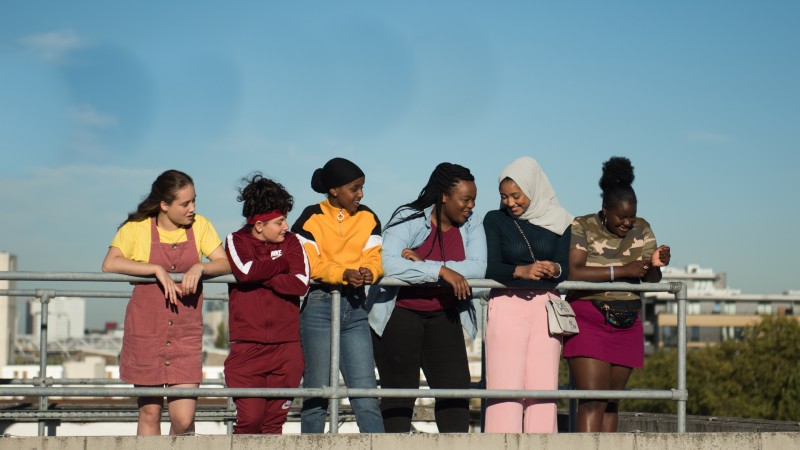 A tough premise, no doubt, but Theresa Ikoko’s script does not revel in misery or poverty. A Hackney girl of Nigerian descent herself, Ikoko has said that “poverty isn’t all about suffering and darkness”, and that her upbringing was “rich in joy”. This is very much evident in Rocks, a tactful mixture of joy and hardship. Nothing is sentimentalised or displayed for some sort of middle class voyeurism. Rather, we see how Rocks’ and Emmanuel’s stoicism keeps them moving forward, their dynamic every bit as believable as the rest of the impressive ensemble cast. Indeed, Kissiedu is quite the performer, his almost every word a knowingly cheeky remark.

After the kitchen sink classics of Karel Reisz and Tony Richardson, Ken Loach and then Mike Leigh were the torchbearers of the genre through the latter 20th century. Their output continues, of course, but the 2000s and 2010s have seen the baton pass to a new wave of filmmakers including Amma Asante (A Way of Life, 2004), Andrea Arnold (Fish Tank, 2009), Sally El Hosaini (My Brother the Devil, 2012) and Clio Barnard (The Selfish Giant, 2013), producing some of the best work in the social realist canon. With Rocks, Sarah Gavron has made a sterling contribution, telling a story of friends, family, youth and the city.

Rocks is out in cinemas on Friday, September 18th. It won the Best Casting Bafta in 2021. In April it was made available on Netflix.

Portuguese couple in London engage in a battle against social services in order to save their three children from forced adoption, in this very Loachian family drama - from Raindance [Read More...]

Watch the very first trailer for Mike Leigh's latest film, about the epic historical moment in Manchester that led to the creation of the Guardian - in cinemas in November. [Read More...]