"Dirty gem"
Trauma, sibling tension and distrust are the pillars of this unforgettable and unnerving Canadian set tale of revenge - now available on Shudder

Every now and again, a film’s drama provokes us into feeling that we are the proverbial fly caught in its web. This is what we experience when we meet Miriam (Madeleine Sims-Fewer), a troubled woman on the edge of divorce, who with her husband Caleb (Obi Abili), visits her younger sister Greta (Anna Maguire) and brother-in-law Dylan (Jesse LaVercombe), at their secluded lakeside home in the woods. When a slip in judgement leads to an act of betrayal, Miriam believes her sister is in danger. Her fear compels her to commit an act of violent revenge, but she is not prepared for its emotional and psychological toll.

We lend our ears, hearts and minds to a film. Here, we witness the tensions between Miriam and her husband, and we listen in as she confides in Dylan about their intimacy struggles. We see the underlying tensions between the siblings, and Greta’s distrust juxtaposed with a deep love. By the film’s end, we have not only connected with Miriam and Greta, but the events we have witnessed matter – emotionally at least. We may know that this is only a contrived story, but through our experience of sharing emotions, an empathy and sadness for the siblings, these characters will remain real to us. These feelings mean that we’ve been caught in their emotional web.

The pain of a troubled and broken character can draw us like a moth to a flame, but it’s the intrigue of the unspoken surrounding Miriam that draws us to her. An incident late in the film likely confirms our suspicions about the stigma of her PTSD, but by not openly sharing her pain with us, we are kept at a distance. Yet we see her predatory violence, followed by her traumatic expression of anxiety. She’s a difficult character to forget because by not fully revealing herself to us, she leaves us wanting to understand the violence, pain and anxiety that we responded to with empathy.

In as much as the film can be read clearly, it exists in the grey, portraying the conflict of a clarity of mind versus an impulsive mindset. Violation challenges us to think about whether images are more convincing than words, and if drawn to fragility and troubled persons that can compromise our own judgement, can our reason penetrate any potential misconception? 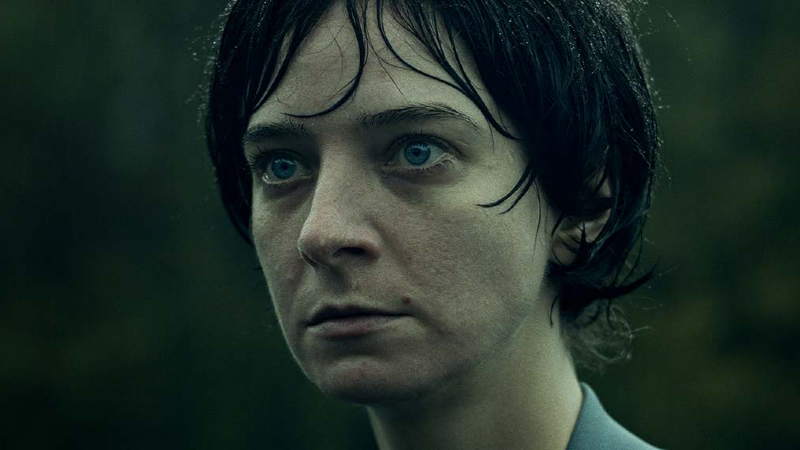 What becomes interesting here are the possibilities of truth, our interrogation of how convincing someone can lie, or deceive another person by positioning themselves as a victim. Or whether the victim of trauma makes other people victims of their trauma. Violation is an unnerving film that does not ask us to judge Miriam. It’s an unnerving web of trauma, sibling tensions and distrust, but it’s also a space to think about how we are responding to the characters and the events.

The calm of the house on the lake casts the characters as ripples disturbing the tranquil setting. Throughout, the filmmakers emphasise a juxtaposition of man versus nature. In one scene Dylan and Miriam take in the majestic beauty of a waterfall, and the narrative itself is threaded together by sublime abstract shots of nature. Along with the dramatic music, Violation could be accused of indulgence and a sense of its own self-importance, but in seeking the sublime amidst the chaos of trauma and violence, the film conveys something more.

The shots of a wolf biting down on its dead prey functions as a metaphor of Miriam as both predator and prey through her trauma. While Miriam’s violence can be considered a primitive strength, it frames the predatory nature of trauma, and the emotionally anxious response to her violence is also telling. In nature killing is a way of being, and while we cannot dismiss that violence and cruelty is a way of being for humankind, there is something characteristically untoward. The impression the film casts is that we are blemishes or scars on the landscape. Our savage sides are an affront to our self-awareness, morals and ethics that dirty us as sublime creatures.

Violation is blessed with a cinematographic sensitivity, in one scene the camera observing details of Miriam’s memory that in keeping with the other aspects of juxtaposition, combines an aesthetic beauty and an ugliness. The use of imagery, both metaphorical and non-metaphorical compliments the mood and communicates feelings without a need for dialogue. What positions this as an accomplished work is that in spite of the sexually explicit scenes and violence, these are overshadowed by the emotional moments the characters share, and the violence is used as an impetus for a deeper discussion.

Violation premiered at Midnight Madness section of the Toronto International Film Festival (Tiff), when this piece was originally written. On Shudder in April.

Our dirty questions to the Canadian helmers

Independent Canadian filmmakers Madeleine Sims-Fewer and Dusty Mancinelli talk about their debut feature Violation, drawing from their own experience of abuse and why they take no pride in being filmmakers, in an exclusive interview. [Read More...]

What about a movie about a ghost child entirely set on the narrow and eerie streets and canals of Venice wrapping up the Venice International Film Festival? Sounds cliched, but it's actually a jolly good idea! [Read More...]