"Dirty gem"
Henry Golding is haunted by the past in this elegant British work of cinematic tourism - in cinemas Friday, September 25th

People who have missed travelling during the lockdown period will find some vicarious comfort in Monsoon, director Hong Khau’s follow up to his well-received feature debut Lilting (2011). Henry Golding plays Kit, a man returning to his birthplace of Vietnam after his family fled to Britain in the aftermath of the Vietnam War, when he was only eight. Kit is there to spread his mother’s ashes, arriving in Saigon with little memory of the place he grew up. During his journey, he reconnects with the past his parents tried to hide, and reconciles it with a future he’s afraid to start.

As we follow Kit through a new world of busy markets, bustling restaurants and weathered neighbourhoods, Monsoon emerges as a story told through the lens rather than the script. Conversations can be quite mundane, but a reaction caught in the reflection of a mirror, or someone shuffling awkwardly in their chair at a question half-asked, tells us everything we need to know. There is a trade-off, as this method means the film moves quite slowly, but it also gets the opportunity to ask some interesting questions.

Khau delves thoughtfully into the viewpoint of migration, of possessing only flickering memories of a place that is so key to your identity. Kit is both a visitor and a local, finding people connected to the early years of his life yet unable to speak the same language. One excruciating scene on a train displays this paradox, as Kit is mistaken for a resident by an ignorant tourist. It’s a part of a larger portrait, presenting him as someone at an emotional crossroads. Kit being gay would have been used for dramatic effect in a less subtle story, but here the men in his life are just another example of how Kit struggles to connect. 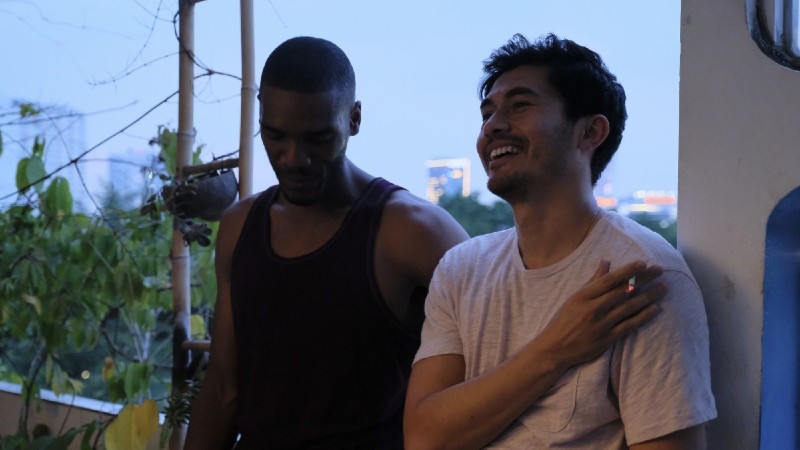 Another conversation is the heavy weight of history felt by its descendants. American designer Lewis (Parker Sawyers), with whom Kit has a fledgling romance, struggles with his national identity in a country where being American comes with a lot of baggage. Kit himself is torn between resenting his parents for never talking about their home country, and understanding why they wanted to give him a fresh start. These dynamics have no easy answers, but the film gently moves toward a conclusion that the past should never overshadow the future.

Those who know Golding only as the suave dreamboat from Crazy Rich Asians will be surprised to find the star in a more vulnerable place with this character. Kit spends much of the film with his guard up, unsure what to say or do next. A smile flickers across his face as he makes a joke or offers relatives painfully English gifts, and as it disappears, we feel the struggle of someone who feels like a stranger everywhere he goes. His soulful eyes are the perfect way to tell a story in which so much is conveyed through wordless expression.

His most interesting interactions are with Lee (David Tran), a childhood friend who remained in Vietnam and Kit’s first port of call. As well as a sadness that the boy he remembered has changed, Lee stares curiously at a person whose life might have been his, had things worked out differently.

This movie is in no hurry to explore the remnants of a lifetime, but Golding’s travels will speak to many who have questioned the idea of home.

Monsoon is out in cinemas on Friday, September 25th.