Films are chapters of my life

Luc Roeg, son of the late director Nicolas Roeg talks about his one time onscreen role in his father’s cult classic Walkabout, emotion as a filmmaker’s holy grail, and film as the chapter in one’s life - in an exclusive interview.

Two young siblings, 16-year-old Girl (Jenny Agutter) and six-year-old boy (Luc Roeg), are stranded in the blistering heat of the Australian Outback. A picnic with their father turns violent when he tries to shoot them, before shooting himself. Seeing that he has set the car on fire, the Girl tells her brother that he will rejoin them later, as they try to find their way back to the city. Exhausted and starving, the pair cross paths with an Aboriginal boy (David Gulpilil) on ‘walkabout’, a ritual in which at the age of sixteen, a Aborigine man-child is sent out to survive off the land. Accompanying him on his ritual, he teaches the pair how to survive in the wilderness.

While Walkabout is Roeg’s only acting credit, he has produced Mr. Nice (Rose, 2010), We Need to Talk about Kevin (Ramsay, 2011), and Carol Morley’s The Falling and Out of Blue (2018), as well as music videos for bands including, Simple Minds and Tears for Fears.

In conversation with DMovies, Roeg discussed his memories of Walkabout, his relationship with his father, the late Nicolas Roeg, and films as chapters of one’s life.

Paul Risker – What are your memories of the experience and has your response to the film changed with time?

Luc Roeg – On a personal level I have very fond and warm memories of making the film – of being in that beautiful natural environment, and sharing that experience with my brothers and mother, and obviously my father who was directing and photographing the movie. In terms of how I look at the film now compared to when I was younger, even as a child and an adolescent, and through the various chapters of my life when I’ve had the pleasure of revisiting it, I still appreciate it in different ways.

As a child you see it and maybe all you see is yourself. Then as you get older and you’re making the chapters in your own life, you come to see more of the film and get more out of it. I think I’m distanced enough now to be able to look at it and see that young person in the film in an almost disconnected way, although I’ll never be disconnected – the film will always be a very personal and intimate experience. 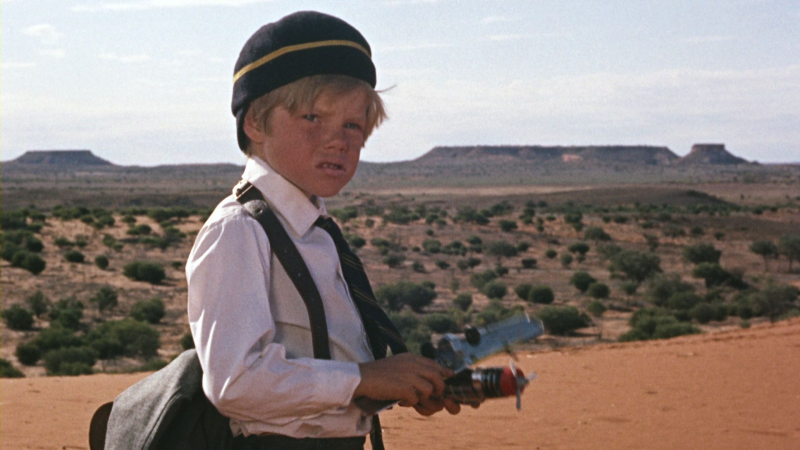 PR – We often view the artist through their work, but as Nic’s son, did you learn anything about your father through his work?

LR – The reality is that I’ve never interrogated my father or my relationship with him through his work. I guess I’m as much of a fan as I am a son, because I have watched his films and appreciated, and enjoyed them as much as the next person who has enjoyed Nic’s work, without thinking that I’m in any way seeing the man through the work. I think that’s partly because he was so much about his work.

Everything in our lives and everything about Nic was always about his work, and I don’t say that in a negative way. It’s not uncommon with artists for their work and their life to be one. The moments of making films for him felt like chapters of his life. If I’m reading anything into his work, it’s the chapters of his life, and I’ve experienced that myself. It takes such a long period of time to make a film that they become chapters of your life. You can watch the film at a later stage in your life and remember that time, and it brings back certain feelings with it.

PR – Would you agree that Walkabout as a timeless quality because of the way in which Nic used image and sound, the camera and the edit to provoke an emotional response?

Why Walkabout still feels contemporary is that it’s not caught in any decade because it’s set in a natural environment, and there are only three people in it. But all the attitudes and feelings of those three people could be as relevant today, and all of the ways it makes you feel are as relevant today as it was then.

You’re absolutely right, those are the qualities that makes a filmmaker stand out. He [Nic] had that ability through his work, and that came from his deep understanding of the technical process, and how to make a film. To be a great contemporary artist, you have to understand the absolute fundamentals of the art to deconstruct it.

PR – Do you perceive there to be a transformative aspect to the filmmaking process, and should the audience also be transformed through their experience of a film?

LR – If you’ve created a piece of work in cinema that is a transformative piece of work, then you’ve achieved a big goal. It’s a very difficult thing to do and it comes back to your previous question about feeling. I think if you provoke feeling in an audience, or you make them interrogate their feelings in a way that they’re not used to or isn’t expected, then that’s a transformative moment in itself, and that’s a great thing to have achieved.

In terms of my own experiences of making films, yes, it’s linked to that element of them being chapters of your life. They take you to some extraordinary places, and just the challenge of making them, the creative partnerships you have with filmmakers, actors and technicians is in its own way as transformative as any learning and life experience is.

Walkabout is out now on Blu-ray

The image at the top is of Luc Roeg (sourced from The Criterion Channel); the image in the middle is a still from ‘Walkabout’.

French thriller about young femme fatale divided between a young criminal lover and an older wealthy husband is pretentious and unnecessary - live from Venice [Read More...]

Slow-burn drama makes us feel the grind and the haunting pain of a woman’s psychosis following a fatal car accident - from the FrightFest Film Festival [Read More...]