Holly (Azura Skye), a wife, mother, teacher and daughter suffers a psychosis following a fatal car accident, yet even before the incident, she’s struggling with family and work pressures. Her two teenage sons are at that difficult age, and her husband Rob (Bryce Pinkham) anxiously awaits a promotion at work that will ease financial pressures. Meanwhile, her sister Claudia (Ashley Bell) who she has a fractious relationship with returns home, and student Paul (Zach Rand), shows an inappropriate interest towards her.

The Swerve is an effective exercise in slow burn drama, a quietly unobtrusive film that leaves us with a haunted feeling. Tragic storytelling should provoke such a response by accessing our empathy and sparking a spectre of pain within our breast. We feel the grind of the anxious passage of time as we watch Holly battle her own mind. Our memory of the film comes to be characterised by pain and sadness.

It’s not possible to identify a single defining moment in the story, but an important literary reference does signpost Holly’s experience as a journey into a psychological and emotional hell. In an early scene, a student in Holly’s English class reads aloud a passage from Italian poet, Dante Aligheri’s The Inferno: “When I had journeyed half our life’s way, I found myself within a shadowed forest, for I had lost the path that does not stray. Ah, it is hard to speak of what it was, that savage forest, dense and difficult, which even in recall renews my fear: so bitter – death is hardly more severe!”

This is underlined with an irony when Holly remarks to the class, “…fear: so bitter – death is hardly more severe! That’s intense.” This will cease to be an intellectual thought, transforming into a traumatic personal confrontation with reality and delusion.

Kapsalis appreciates his playful role in blurring and revealing these boundaries, that are at his discretion. This action shapes our relationship not only to Holly, but also to the other characters. Her paranoia and suspicions become ours. But then we question her perception of reality and we fear that her impulsive responses to a betrayal have only heightened the savageness of the forest. 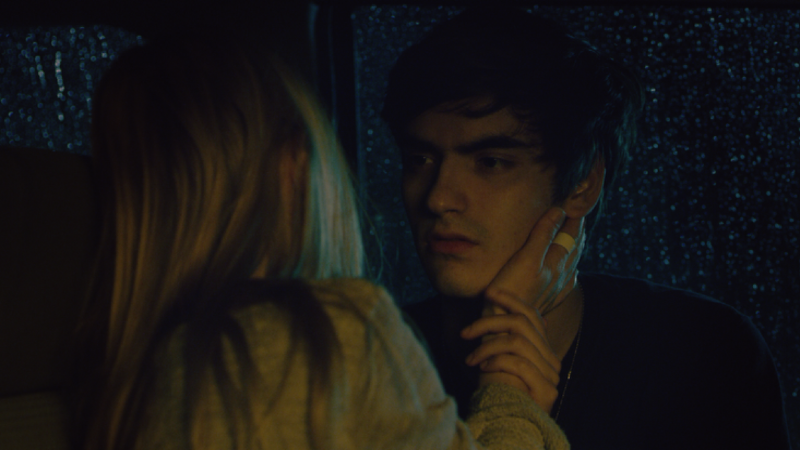 Tapping into the uncertainty and angst of living, The Swerve presents itself as a human horror story. There are no monsters lurking in the shadows here, nor persons known or unknown. Instead there is something more terrifying – one’s own mind. Holly echoes Norman Bates in Psycho (Hitchcock, 1960) and Mark Lewis in Peeping Tom (Powell, 1960), whose minds, shaped by their life experiences were the true antagonist of their respective dramas. Admittedly, the murderous nature of Bates and Lewis are on the extreme end of the spectrum of fractured minds and damaged personas, but the connection remains intact.

The mouse Holly discovers and which forms a subplot of the film, is an important moment in framing her vulnerability. The incident mentally and emotionally unsettles her, and even irritates her husband. It serves as a symbolic distraction for when we might discern that she wanders from the path, and from here, the rest of the story becomes a reimagining of a shadowy forest.

But Holly is product of her life experiences, and we should remember that mental and emotional struggles are not an easily defined series of points on the map of one’s life. It’s not uncommon for someone confronted with such struggles to realise they’re lost only after they’ve gone astray. Together with Bates and Lewis, Holly is part of the picture cinema casts of life experiences influencing a persons fate. Each are dramatic in different ways, all three spurred on by a family figure: Bates by his mother, Lewis by his father and Holly by her sister.

As symbolic as oranges were in The Godfather (Coppola, 1972), here something as innocuous as apple pie carries with it foreboding symbolism. It’s synched with Holly’s mental and emotional scars that have never fully healed. Claudia rips these open again by taunting her sister about a childhood incident, that threads together Holly’s youth and adulthood with disastrous consequences.

Throughout there is a lack of exposition to detail Holly’s fracturing mind, and reassuringly the director is not so naïve as to believe in a singular defining event. The drama is in every scene, and is not only found in specific moments. Instead of relying exclusively on dramatic moments, the director frames Holly’s journey has a continual process that even precedes the opening of the film, even her marriage and the birth of her children. Kapsalis blurs this distinction between two paths to instead suggest that there is a single path in life. He echoes Dante’s sentiment of intertwined happiness and suffering, good and bad, because as the poets passage continues, “But to retell the good discovered there, I’ll also tell the other things I saw.”

The Swerve had its UK premiere at the 2020 Arrow Video FrightFest Digital Edition Film Festival. It is out in U.S on VOD/Digital platforms on Friday, September 22nd.