Two young siblings, 16-year-old Girl (Jenny Agutter) and six-year-old boy (Luc Roeg), are stranded in the blistering heat of the Australian Outback. A picnic with their father turns violent when he tries to shoot them, before shooting himself. Seeing that he has set the car on fire, the Girl tells her brother that he will rejoin them later, as they try to find their way back to the city. Exhausted and starving, the pair cross paths with an Aboriginal boy (David Gulpilil) on ‘walkabout’, a ritual in which at the age of sixteen, a Aborigine man-child is sent out to survive off the land. Accompanying him on his ritual, he teaches the pair how to survive in the wilderness.

In considering Walkabout, Roeg’s first film Performance (1970), co-directed with Donald Cammell, and his third feature Don’t Look Now (1973), offer a series of interesting spatial contrasts. The openness of the Australian outback inevitably leaves an impression upon our memory. This casts a deep contrast to both a gangster hiding out in the London house of a former rock star in Performance, and the claustrophobic Venetian walkways and canals in Don’t Look Now. But Walkabout’s opening is a claustrophobic and a densely packed space.

The camera pans from a brick wall to look down a narrow street, cuts to a crowd of people, among them is the father, and then cuts between shots of their legs and upper bodies. We are then introduced to Girl in music class sat in a tight grid of occupied tables and chairs of girls practising breathing exercises. Boy is introduced pressed into a crowd of people on the side of the road as men in uniform march past. Meanwhile, the condensed apartment buildings in which the family live on top of other people introduces a layer of domestic claustrophobia.

The cinematography also conveys the dense city space. Roeg frames the father through or around visual obstructions, and angles the camera up toward an office window, like we’re craning our necks up, where he’s obviously in a tense work related meeting.

In spite of the vastness that is synonymous with the film, it’s not without claustrophobia – even the interior of the car, before Girl begins setting up the picnic and Boy runs around playing feels oppressive. This is a motif Roeg will return to at the close of the film, juxtaposing the wilderness with the city apartment that is not without a sense of irony.

A father’s attempted murder of his children versus a tragic accident at the opening of Don’t Look Now also forms a notable contrast. These are important because they forge an identity for a film amidst their place within a collective filmography. There is something simple about the tragedy of the latter, because the violent picnic touches upon a darker philosophical idea. 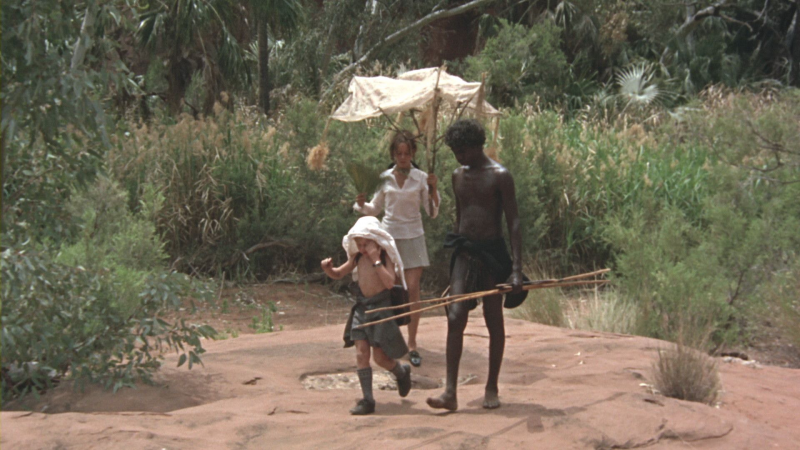 We are not born of free will – we are thrust into being, and we will experience the gamete of emotions, including suffering. To have children is an act of cruelty as much as it is a miraculous act, and the father’s act of cruelty as he tries to take his children out of this world can be read as an act of kindness.

Roeg and screenwriter Edward Bond, who adapted Donald G. Payne’s novel positions us as children, witnessing cruelty but not fully understanding it. But by the film’s conclusion, through an aged Girl, married and living in a city apartment, we experience a deeper insight into the cruelty that sparked the opening tragedy. Cruelty and kindness are not necessarily exclusive forces, and as immoral as the actions of the father are, they can be seen as trying to spare his children’s suffering. This engages a complex discussion. What is likely an uncomfortable and controversial theme of the drama for many, is whether we allow the hurt and experiences of life to suffocate us? Do we see death as something we have no control over, or do we assert control and embrace death as a choice? The film never fully commits to answering any of its own thematic enquiries, instead it invites us to read deeper into its soul and uncover our own feelings and ideas on the subject.

Walkabout is a powerful and an uncomfortable piece of filmmaking if engaged with honestly. We should not view it as pessimistic, but it is a look into the abyss of man, a parable that requires us to bring an openness and thoughtfulness to the experience. This is film as art, and Roeg does not attempt to create an experience in which we must exclusively suspend our disbelief. His authorial voice of cutting through time, the familiar raw treatment of the edit reveals his fingerprints. Walkabout is a record of a moment in the story of film that an auteur introduced himself, and the uncomfortable and darker thematic shades that form the film are complimented by his raw aesthetic.

Walkabout is out now on Blu-ray

A desperate Bosnian mother and wife scrambles to save her male relatives from a seemingly inevitable death in Srebrenica - on VoD on Monday, March 22nd [Read More...]

Films are chapters of my life

Luc Roeg, son of the late director Nicolas Roeg talks about his one time onscreen role in his father’s cult classic Walkabout, emotion as a filmmaker’s holy grail, and film as the chapter in one’s life - in an exclusive interview. [Read More...]

Slow-burn drama makes us feel the grind and the haunting pain of a woman’s psychosis following a fatal car accident - from the FrightFest Film Festival [Read More...]