The director of the upcoming documentary 'A Life on the Farm', about a Somerset farmer’s insane home movies, talks about his project in a letter to our readers - now it's your turn to help out!

Oscar Harding’s grandfather passed away in the rural country of Somerset, England a decade ago. Amongst his possessions was a video tape from one of his neighbours, an eccentric farmer named ​Charles Carson​. Self-shooting, editing and scoring everything manually, Charles’ home movie is hilarious, imaginative and downright weird.

Filmmaking wasn’t Charles’ only talent – there’s a real argument to be made that he was an early pioneer of the Death Positivity Movement and the inventor of the “selfie”. He’s a great undiscovered outsider artist and it’s time his story was told. Desperate to learn more about the man and his movies, Oscar embarked on a years-long journey that’s been full of twists and turns. There’s far more to Charles’ story than his videos reveal.

‘A Life On The Farm’​ is an exploration and celebration of Charles Carson and his movies, which present a moving and laugh-out-loud document of a time and place in danger of being lost to history.

As the post-production Kickstarter campaign for his feature debut draws to a close, Harding writes about the journey so far, the importance of Kickstarter and what the audience can expect from the final film.

Back in 2006, my grandfather passed away. He had lived in deepest rural Somerset for years, an area I visited so often as a child that it was like a second home to me. When our family was clearing out his possessions, my aunt found a video tape he’d been given by one of his neighbours – a local farmer called Charles Carson.

The memory of watching this bizarre home movie for the first time stands out clearly for me, images from the film were seared into my mind. Soon after that fateful viewing, we moved house and unfortunately lost our digitised copy of the film – I never thought I’d see it again… until it came up in conversation one day. My aunt casually mentioned she still had a copy buried away, and after all those years I couldn’t wait to see it again.

I assumed it couldn’t be nearly as remarkable as I remembered – but it was even more so. Cat funerals, Scottish dancing, multiple cowbirths… it was unlike anything I’d ever seen before. I had to find out more about this video, and the man behind it.

When I showed it to Edward Lomas and Dominik Platen, my two production partners at our company Sonderbar Pictures, they were just as excited by Charles’ video as I was. We immediately started pre-production on what would become our first feature-length documentary, researching all we could about Charles and those who had known him. 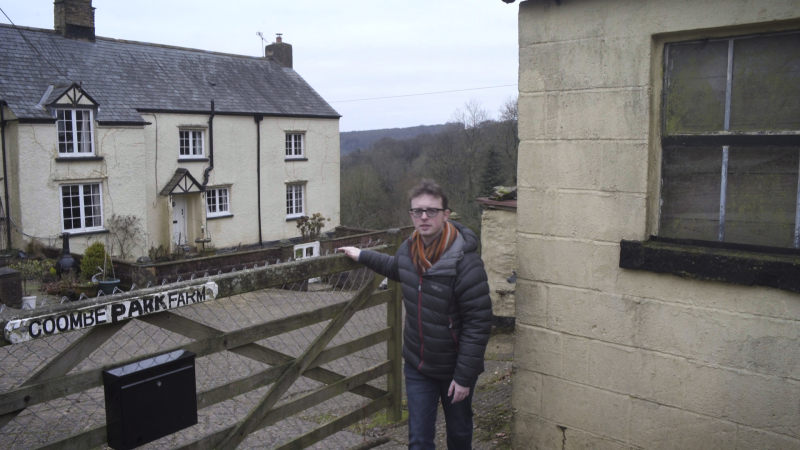 The more we spoke to people, the more we built up a portrait of a man that went far beyond what we had seen in his home movies. We had more to show people than just Charles’ movies – Charles himself deserved to be celebrated. He taught himself to shoot on a video camcorder, manually edit everything, create his own titles and include music in his home movies. It wasn’t as easy to do that back in the 90’s as it is now. His films aren’t just a jumble of random moments – they are carefully structured, crafted to tell stories and crack jokes.

His work also affected me on a personal level – he would make unique cuts of his films for people around the local village, including my grandparents. My grandmother, the district nurse who looked after Charles’ brother, died before I was born. The copy of the film in my possession contained the only footage I have seen of her in motion, how she sounded and how she acted. I owed Charles a debt for that.

A personal decision to relocate to the US was something I thought would severely slow down production on the documentary. Instead, it turned out to accelerate it far beyond anything I could have imagined. I wanted people who celebrated found footage like this for a living to give me their thoughts on the appeal of tapes like these, and what motivated amateur filmmakers like Charles. Among them were Nick and Joe from The Found Footage Festival – they were as intrigued by Charles and his movies as we were, and have since come onboard as producers and helped to finance the production. But we still needed more money for post-production, as filming was coming to a close.

We decided to launch a Kickstarter campaign after very careful consideration – not only is this a platform where you run the risk of not seeing a penny because of the “all or nothing” method of funding, but it is asking a lot of people to invest in your project. Not only do you owe them and are expected to deliver, but they have invested in you and your film, in more ways than one.

Charles’ movies were made for an audience. His repeated attempts to get them out there in the world are evidence of that (more on that in the documentary). We’re sharing his story with the world, so it makes complete sense to get people involved as early as possible. The overwhelming response we’ve got so far proves that there is a demand for his work, and those who want to learn more about him.

We could have gone after funding exclusively in private, tried to launch this on the festival circuit and through traditional distribution, and only then reached out to audiences. But we want people to go on this journey with us – those who are proud of British film, and the regions like South West England that are so often overlooked. Those who want to learn more about an area and a way of life that is in danger of being lost to time, documented and immortalised by Charles. Those who embrace the odd and the eccentric, and understand there’s more to people like that than what’s on the surface. Those who love discovering the obscure, and want to share hidden gems like this with other people.

Audiences can expect a film that goes far beyond that initial reaction I had upon watching Charles’ films – at first you laugh at how insane it all is, but it is testament to Charles’ filmmaking talents that you can’t stop thinking about it. You’ll discover a passionate man, an aspiring artist and someone with a lot more depth and intelligence to him than meets the eye. Charles was a photographer, an inventor, an outsider artist, and an unassuming pioneer of everything from Selfies to the Death Positivity movement.

But above all else, it is clear he was a showman, creating art to bring joy to friends, family and neighbours. At first we were concerned we were intruding on something not meant for public consumption, but the more we learned, it became clear Charles wanted to share his work with others – so we’re doing exactly that.

We think you’ll come to love Charles Carson and his work as much as we do, but to tell this story the way it deserves to be told, to the highest possible standard, we need your support. In return for backing the film on Kickstarter, we’re offering everything from copies of the film to your name in the credits. We hope you’ll come onboard and become a part of Charles’ story.

Just visit our kickstarter page in order to find out more, and please give us a little hand!“

A government officer is split between her maternal feelings and her allegiance to the communist regime during the little-known Novocherkassk massacre of 1962 - on VoD on Monday, March 15th [Read More...]

Documentary about the political imprisonment of Caetano Veloso during the Brazilian military dictatorship has priceless moments for fans yet little appeal for those not familiar with the iconic singer - live from Venice [Read More...]