Roger Corman, the pope of pop cinema, once said: “The worst thing you can do is have a limited budget and try to do some big looking film. That’s when you end up with very bad work.” Happily, with a nano-budget of just £200, indie filmmakers Jack Sambrook and Will Unsworth are well aware of their limitations, and Bad Guys is all the better for it.

Corman learned the ropes with trashy horror movies, but this Brighton duo have drawn inspiration from the kitchen sink flavours of the British indie scene, namely Ben Wheatley’s Kill List and Down Terrace. As a result, the film’s influences are worn on its sleeve, but this is all part of the Corman philosophy – watch a load of movies, understand how they work, and turn this knowledge into your own cineliterate, nuts-and-bolts feature.

The story, which is a road trip-cum-crime caper, follows Gaz (Sambrook) and Cal (Unsworth), a pair of lowly debt collectors operating in a grey and gloomy Brighton. The dynamic is one you can imagine – Gaz is aloof and stand-offish, while Cal is loquacious, reckless and prone to violent outbursts. When Cal’s temper kills a man, the young men are ordered to drive the body north and bury it in the countryside. 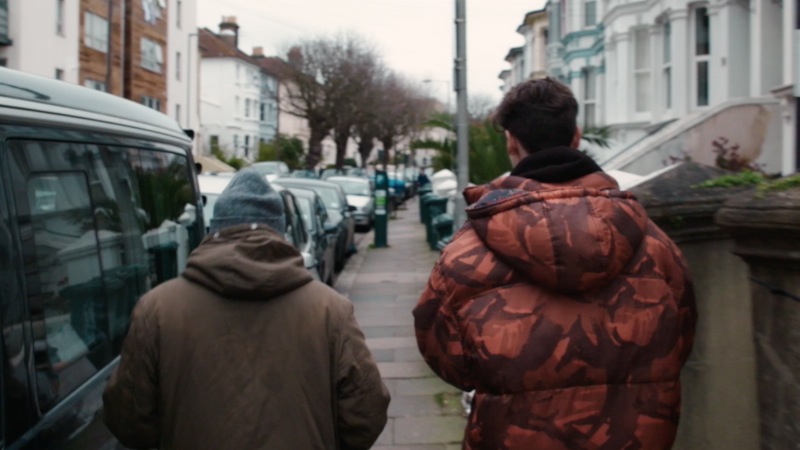 The film’s bleak tone is framed by Rowan Holford’s striking cinematography, which combines long static shots and handheld work that skilfully balances rawness and fluidity. Particularly absorbing are the driving montages through Britain’s bypasses and winding, canopied B-roads, deftly capturing the motion and sensation of travel. Indeed, there is an elemental streak that runs throughout Bad Guys, which is complemented by Matt Unsworth’s orchestral, Carter Burwell-inflected score.

The real draw, however, is the chemistry between the leads. Sambrook is appropriately crabby as Gaz, making the rules as he goes along in an attempt to control Cal, who chinwags with anyone who’ll listen. Gaz does lighten up, though, and their exchanges consider everything from petrol station confectionary to a revelatory discussion of the female urethra. The dialogue never feels contrived and no wisecracks fall flat, which is a reflection of the leads’ performances and their collaboration on the script.

Another merit is a small but marked flair for suspense, which is ratcheted in a bathroom encounter between Gaz and a faceless, ominous stranger. It reminds you that these young men, barely into their twenties, are in a grave situation with some very dubious people.

We love indie film here at DMovies, so it is always a delight when an accomplished nano-budget feature like Bad Guys appears on our radar. Sambrook and Unsworth will have more cash for their next film, no doubt, but this won’t mar their grounded, kitchen sink sensibilities – it will bolster them.

Bad Guys is available on Amazon Prime in the UK now.