The Gangster, The Cop, The Devil

"Dirty gem"
Better the devil you know. A no-nonsense cop and a ruthless gangland boss join forces to catch a serial killer in this South Korean thriller - now available on VoD

Violent motorist Kang Kyung-ho (Kim Sungkyu) tailgates cars then after he and they have both pulled over stabs their unsuspecting drivers to death. One night, he picks mob boss Jang Dong-su (Ma Dong-seok) who fights back and gets away, inflicting wounds on the killer despite being first stabbed in the back. Meanwhile, his nemesis, cop Jung Tae-suk (Kim Mu-Yeol), is pursuing the same serial killer. Cop and gangster enter into an uneasy alliance to catch the murderer.

As South Korean gangster and crime movies have developed in recent decades, they’ve generally become slicker and, on one level, technically more proficient. Yet on another level, earlier South Korean gangster movies, while rougher around the edges, often have a lot more going on underneath the surface. This one however, while covering everything with the contemporary, superficially fast-paced and slick veneer with lots of impressive car chases and extremely violent one-on-one or group fights, achieves much more interesting dynamics beneath the slick, mass produced veneer. 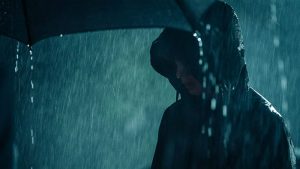 The cop, for example, is first glimpsed in a car with a buddy on his way to a crime scene and stuck in gridlock. Spotting some of the mob boss’s men on the street, he gets out of the car to harass them, then pushes his way past several of them to get to the boss. The mob boss himself, meanwhile, who a henchman describes to the cop as “not having a good day”, is working out with a hanging punch bag. A few minutes later we discover that the hanging punch bag contained a man and that the boss was beating this man up. He’s a seriously nasty piece of work and when shortly afterwards the motorist tailgates him, it’s obvious the boss is not going to be your regular, passive murder victim.

Similarly, when the cop pushes his way past assorted gangster minions to get to their boss, you get the impression he’s someone who never lets any such obstacles prevent him reaching his goal.

As this races through scene after scene of frankly astonishing action set pieces, the developing relationship between cop and gangster, working together to catch the killer slowly emerges as the centre of the proceedings. The one wants to catch the criminal and put him behind bars, the other wants to find his attacker and wreak revenge. 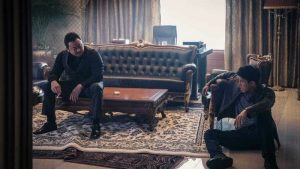 Curiously, a scene of the gangster giving his men orders, to which vocal they respond as one, ” yes, Sir”, plays like a clichéd scene of a police superior addressing his cadre of officers in so many eighties Hong Kong thrillers. Indeed, the whole cop–gangster element plays out like a remade, remodelled John Woo movie, with slicker but arguably less gritty and exciting action – although it lacks Woo’s unique directing of bravura action to define his various characters.

That said, Kim Mu-Yeol’s cop possesses a certain charisma while Ma Dong-seok’s gangster will similarly stay with you long after the he final credits. But it’s Kim Sungkyu’s unflappable serial murderer, with his disarming smile, who steals the show; an arresting enough screen adversary to give the other two leads pursuing him a serious run for their money.

The whole is at once a very clever reinvention of the buddy movie and proof that it’s still possible to breathe life into a narrative form as seemingly exhausted as the hunt for a serial killer. Altogether, a hugely satisfying affair.

The Gangster, The Cop, The Devil played in the upcoming Mayhem (Nottingham), London East Asia (LEAFF) and Leeds Film Festivals (when this piece was originally written). In cinemas Friday, November 15th. On VoD in April.