"Greasy movie"
Journeying to Amsterdam, a banker finds his lodgings to be even more dangerous than his spurious mission, in a film that evokes Hitchcock in more ways than one - on VoD on Friday, April 17th

It can’t be easy living as Simon Pegg’s brother, so fair play to Mike Beckingham for choosing a genre nowhere to be found in his sibling’s wheelhouse. He plays the affable Robert Atkinson, a prosperous banker battling a broken heart. In a moment that eerily recalls the opening moments of Psycho (Alfred Hitchcock, 1960), Robert walks away with a large sum of the bank’s money.

He lives in a world of borrowed goods, none of them belonging to or depending on him. He shares his bed with a married woman, he borrows from a brother who belittles him and gambles away the money he has worked so hard to steal. Drowning in his own self pity, Robert stumbles upon an unlikely aide (played by Togo Igawa). He’s told that if he flies from London to Amsterdam with a mystery briefcase, he will be rewarded with more money than he can spend. Just as Robert leaves to accomplish this seemingly simple crusade, he’s told his life will be on the line.

Beckingham is magnetic, even cutting through some embarrassingly written dialogue with grace. Apropos to convention, Robert doesn’t find his adulterous affair as romantically rewarding as he might have expected. Like many young men, he tries to hide the pain away with the light of a fiery cigarette. The Brit is a more solid actor than his better known brother, but the word-heavy script could have done with one of Simon Pegg’s zesty re-writes. Nigel Barber, co-starring as a garrulous American security man, stumbles through some needlessly over-written exposition as he details the potential terrorists who could be sitting on the plane to Amsterdam. Elsewhere, the scene implements the lame “loud mouthed American” gag that prohibits Robert from falling asleep. 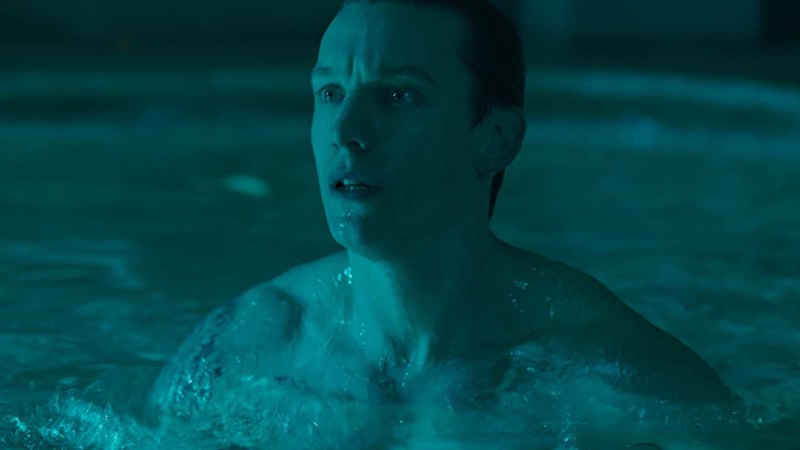 Yet there are moments of genuine paranoia. Robert, unaware of what he might be carrying in his briefcase, searches all over the Dutch airport for any sign of immediate danger. While catching a taxi, he speaks with a DEA agent chasing down heroin smugglers. And when he drinks a glass of wine, gifted to him by his hotelier, the effects knock him completely unconscious. That’s Vera (Maryam Hassouni), the titular host, a complex woman with a taste for danger. She’s kooky, crazy, a little contrived. She cuts cheese and bread with a battle knife, while we the audiences ask if it’s the bread or Robert’s neck she intends to cut. Yet behind this veneer is another damaged character, caught in her own trapped world. Ideally, as a feminist apotheosis, the film should about her, not Robert, but Hassouni is very good nonetheless.

Which can’t be said of the film’s uneven tone. There’s one torture scene, that I won’t be committing to print, that feels nauseatingly out of place. Vera spuriously finds a dagger sickeningly close to her eyeballs in one of the film’s most sensationalist moments. Amidst all these gratuitous moments, the film suddenly remembers it’s a drugs caper and the action returns to London.

So, it’s hard to say if this is either a good or even a focused movie, but it does have an extraordinarily focused lead performance. Mike Beckhingham has proven he’s very much his own man, and should now be judged on his talents, not his family’s, alone.

The comparison to Hitchcock’s 1960 classic in the first paragraph of this review was a random one. The Host is a reversed and twisted version of Psycho, but I can’t tell you more without spoiling the plot.

The Host is available on all major VoD platforms from Friday, April 17th.

Robert the Bruce's 14th Century ascendancy to the Scottish throne in the face of despotic English rule is the subject of latest film by the director of Hell or High Water - in cinemas as well as on Netflix from Friday, November 9th [Read More...]