Like the Georgian traditional dance at its centre, And Then We Danced is a strong piece of work which brims with precision and exudes sensuality. A dancer on the National Georgian Ensemble, Merab (Levan Gelbakhiani) is a poor kid who dreams about making it to the institution’s main dance group and having a life outside the cramped apartment he shares with his family in Tbilisi. The arrival of newbie Irakli (Bachi Valishvili) hits him like a ton of bricks: he dances better, he looks the part… and, to Merab’s eyes, he happens to be very attractive.

Their gradual closeness starts off as a dance partnership, and then it transforms into friendship, finally getting physical. DOP Lisabi Fridell captures the poetry of little gestures people make when they let their guard down. With key scenes set to ABBA’s Take a Chance on Me and Robyn’s Honey, the sparks between the two leads are just very palpable.

Their affair, despite making room for astonishing scenes, does feel a bit samey in the terms of plot, with story beats announcing themselves way in advance to the attentive viewer. Instead, the script, written by Akin, really soars when it zeroes in on Merab’s discovery that the reality he’s in simply doesn’t suit him and that he has to find his own ways of moving beyond it. 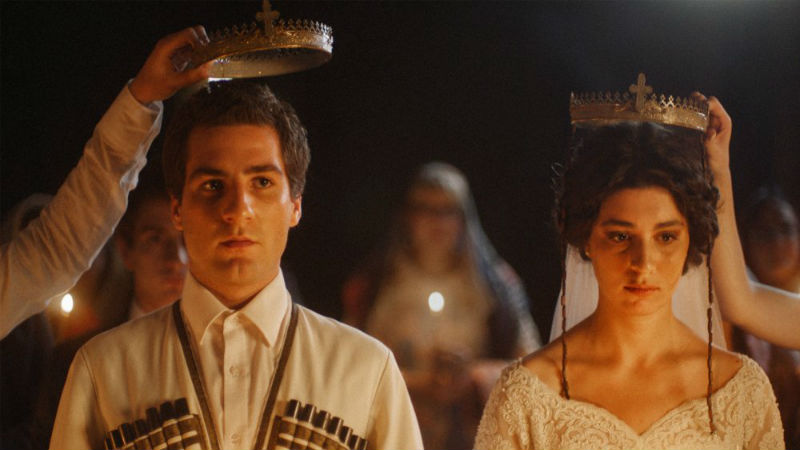 Even before Irakli’s arrival, Merab already felt like an outsider, probably aware that he’s different from everybody around him. While his peers are raging with testosterone wanting to hook up with girls – and some of them are even marrying – he does everything to postpone having sex with Mary (Ana Javakishvili), his dance partner and paramour.

When he starts falling for the new dancer, he doesn’t bat an eye over the fact that it’s a gay attraction, which leads the audience to believe that the real question here is not Merab’s homosexuality, but his place in the world. In this, despite being deeply rooted in Georgian life, the feature points to the universality of this theme. One gets the feeling that, if this were to be shot anywhere else, the protagonist could be part of any group or group and still feel the same way, provided that tradition and close-mindedness had an important role in the social dynamics of his environment.

This universality may cause it to cover the same ground as other films, but Akin’s tender and sensory feature is nevertheless worth the watch. It’s filled with the angst and passion of the tough revelations of adolescence – warts and all – and the euphoria of taking one step closer to your true self.

And Then We Danced is in cinemas Friday, March 13th. On VoD the following week (on BFI Player).

Starring acclaimed dancer Bobbi Jene Smith, this is the tale of a London dancer caught between the beauty of choreography and the constraints of reality - in cinemas and VoD [Read More...]