"Filthy genius movie"
Starring acclaimed dancer Bobbi Jene Smith, this is the tale of a London dancer caught between the beauty of choreography and the constraints of reality - in cinemas and VoD

This is a clarion call. Countering the stagnated notion that choreography and cinema rarely fit together, Mari opens on one continuous frame, spiralling violins silhouetting in a scenic serene set up with dancers pirouetting in visceral motion. Magnetic on feet, Charlotte (Bobbi Jene Smith) contemplates in circled fantasy the steps to her latest show. Aspiring in fantasy, inevitably reality beckons, a phone call takes her to her grandmother’s impending death, while an unexpected pregnancy opens her and her audience to the unvarnished truths of being a woman.

Startlingly honest, Mari walks the symmetry between the real and the hyperreal, confusion beckons the viewer over the genre they’re supposedly watching. Seconds after uncovering the pregnancy test, Charlotte hurdles aggressively and impassioned, berating the back-bones which make her gaping snaps so nauseatingly gruesome to listen to. Deafeningly, silent the sound changes to the powerful probing violins, segued from maternal drama to horror soundtrack (Peter Gregson’s violin centred score is excellent). The fusion, frustration, panic and perversion are embodied on the wooden dance floor that waits her audience. In the motion, there is an emotion so painfully expressed, reaping with the vigour words rarely express. 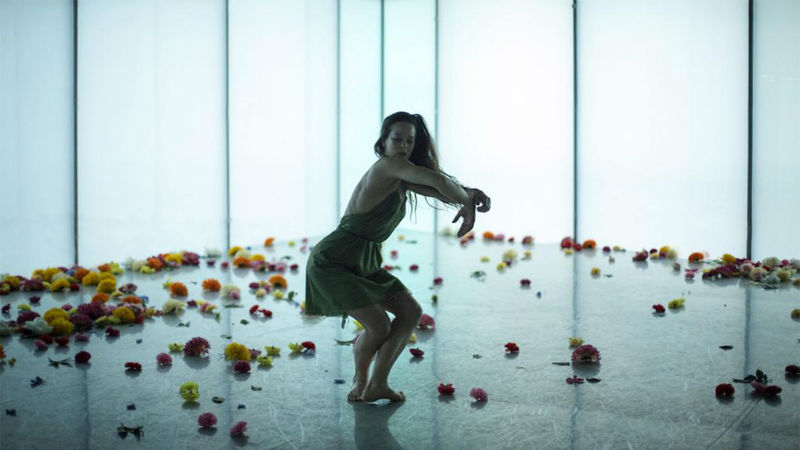 And yet there are moments of beautifully written dialogue. A poignant neon lit kitchen finds Charlotte discussing the trials and tasks motherhood entails with her sister (Madeleine Worrall). Subverting the Bechdel test, two sisters talk about a man, but of its dependency on women. In an era where Robin Wright sits as president, Phoebe Waller Bridge as writer extraordinaire, Mari fits nicely into the under-voiced pantheon.

Director Georgia Parris prescribes to this voiceless arena, etching a heap of choreographies, from the braced, bold banal bathrooms into a carousel of stormy flowers, figuratively festering under the feet of the dancers. Illuminating palettes potent, pastoral, piercing and plain, Smith’s body twirls thunderously before speaking to her family members solemnly. Choreographer Maxine Doyle delves into a series of technically adept scenes, surrounding the viewers with moments of solemn insular introspection (inviting Smith to exercise her enviable pose) or masquerading collected crowds in prodigious powerhouse moves. A festival of pious performance art, Parris wisely never indulges the physical at the expense of the narrative.

As it is a powerful one. Surrounding their matriarch, two generation of women envelope themselves in a family that might soon expect another member. There, by the confines of a hospital bed, life and death meet with the veracity of a dance hall. Neither movement nor words are needed to describe the tangible beauty of the feminine spirit.

Mari is in cinemas across the country from Friday, June 21st, and then on VoD the following Monday.

Tender portrait of iconic ballet dancer doubles up as an exploration of fatherhood and also of the artist's home nation Cuba - now available on VoD [Read More...]