"Dirty gem"
Two grieving parents find themselves living through a continuum of nightmares, each more horrific than the last - on VoD on Monday, September 7th

Elin (Ylva Gallon) and Tobias (Leif Edlund) stand above their hospital bound daughter, her eighth birthday cake in hand. Singing through their joyous song, the parents turn to their sleeping daughter. Anxious for her well-being, Elin screams for a doctor, the shivering realisation pouring down her sickened spine.

If this sounds like the opening to Don’t Look Now, it really isn’t. There’s no cosmic love scene that brings the fractured parents in one glorious three minute montage, instead audiences are treated to a two-minute argument as they search for a place to stay. Three years after losing their daughters, time has drifted them further apart to points of continuous argument. It’s her wish to sleep indoors, while the bullish Tobias favours the Scandinavian outland. They park in the middle of an abandoned park, where a tent is lifted. Elin’s desire, need, request to urinate, pee, deliver leads to a circle, a panoply, a conduit, a montage of horrific, violent and gruesome deaths.

The above sentence is not needless padding. As the couple are viciously beaten by a triumvirate of eerie strangers that came out of nowhere, the film returns Elin to her restless tent position. In all its violent presentation, no taboos are spared. Elin’s vagina is sucked by a ravaged hound, her car’s mirrors smashed by a large, festering giant. Tobis reacts to every scenario with defiant heroism, then selfish cowardice, but every outcome ends with his testicles at gun point. 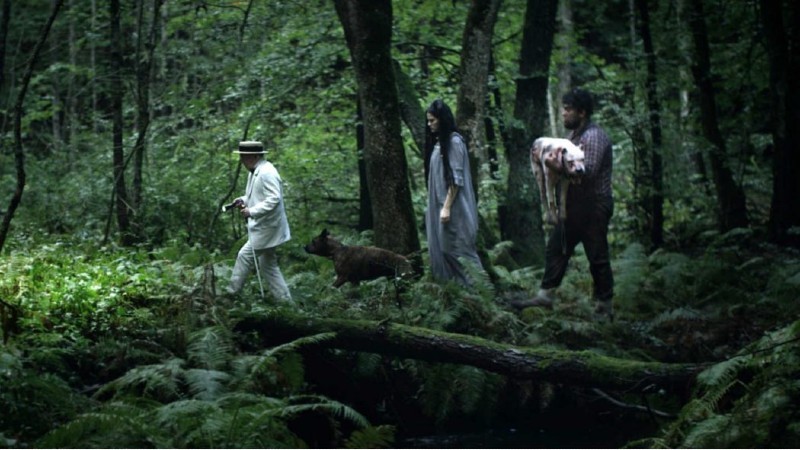 The film is a triumph of showmanship, slipping into a number of telling genres. It opens with a silhouetted animation, a family of rabbits burying one of their fallen pack, and ends with a helicopter shot that feels like a throwback to The Shining’s (Stanley Kubrick, 1980) icy opening. Peter Belli plays the white laden raconteur, poisoning his subjects to pounding tortures, singing directly to the camera the film title that haunts its characters in a series of untimely fashion.

The story isn’t not entirely gender progressive (Elin is always a victim, rather than hero, to her assailants), but Gallon gives an exceptional performance. In one snow laden montage, her decision to follow a white cat leads to the most extraordinary piece of acting in the film. Turning to a wooden shed, Elin is gifted with a shadowed performance that describes to her the meaning she’s long searched for. Silent, mournful, indolent, content, it’s all there in Gallon’s face. Much as it is in the rest of the film, Gallon’s cryptic nature adds to the storyline. Escaping the inevitable is pointless; each of us has our curtains closed on us.