"Mostly clean movie"
Pink Wall is an ambitious non-linear romance entertaining enough on its own merits, but cannot seem to coelesce into a satisfying whole - now on VoD

Romantic dramas lend themselves nicely to non-linear formats. Given that romance is all about chasing, prolonging and relocating desire, mixing up the timeline can add bittersweetness to proceedings. Think the stream-of-consciousness riffing of Annie Hall (Woody Allen, 1977), the melancholic undertow of (500) Days of Summer (Marc Webb, 2009) or the science-fiction philosophy of Eternal Sunshine of the Spotless Mind (Michel Gondry, 2004).

Pink Wall takes this concept of heightening emotion through non-normative narrative to its most minimalist form, honing into six key moments over six years in a particularly fraught relationship. In both narrative and style, it is a genuinely innovative attempt to reinvent the endlessly bickering-couple-genre. While admirable for its ambition and the strength of the two central performances, it fails to take all of its nervous energy and convert into something truly potent. All six scenes are fine on their own; taken all together it feels like a piece of the puzzle is still missing.

It stars two American immigrants in the UK, Jenna (played by director Tom Cullen’s wife Tatiana Maslany) and Leon (Jay Duplass). We never quite find out why they made the move across the pond — although its suggested, rather kindly, given our current situation, that the United Kingdom is a great place for self-expression — but they are glad to have found each other in a land notorious for its lack of Yankee expats. He’s a self-styled cool guy (read: kind of lazy) while she has incredible ambition as a producer (read: kind of uptight). Locking eyes in a club they seem to fall in love at first sight. This scene is given extra melancholic weight by the fact we know it’s going to go wrong; the question is how and why.

Within those two questions, debut writer-director Tom Cullen, has crafted his film. A true writer and actor’s showcase, it could’ve easily worked as a play, yet its ambitions are cinematic too, making use of different aspect ratios — from 1:1 to widescreen — to suggest both intimacy and apartness, opening up and closing down. Cullen has a good knack for locating the way arguments can swiftly turn into resolution and vice versa, passionate debate turning into passionate sex or, even better, passionately eating leftover pasta. These scenes are well-acted and even better-filmed, bringing to mind Ingmar Bergman’s Scenes from a Marriage (1973) in both style and content. 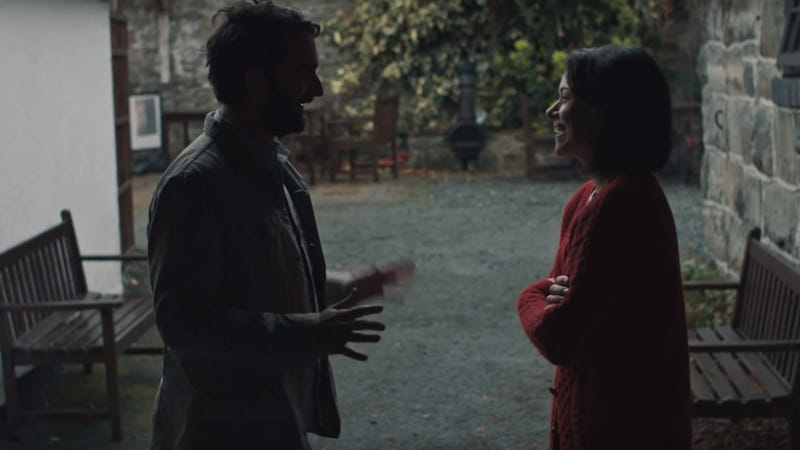 It’s a shame then that some of the dialogue is overwritten and over-improvised, perhaps an inevitable limitation of a nine day shooting schedule. While undeniably relatable to anyone who has been in the throes of a messy relationship, their constant bickering and recriminations, later counterpointed by lovey-dovey cooing and awing, seems like showing-off rather than narrowing in, lessening drama through awkward stabs at realism.

These unpolished flaws are further strained whenever we meet anyone else. One big theme dinner scene, tackling everything from polyamorous relationships to lesbian mothers to gender stereotypes, sound like a parody of London dinner conversation than the real thing. Supporting characters here are merely obstacles for Jenna and Leon to overcome, provoking reactions in them instead of genuine people in and of themselves. A far braver film, perhaps — suggested in the opening shot, where we only see Jenna and Leon as she lays into her brother for calling Leon a “cuck” — may have shown us no supporting characters at all.

In these kind of films, you want to root for the characters; either to get together or show some kind of personal development. Non-linear structure need not be an excuse to avoid plot momentum altogether, yet the six scenes of Pink Wall cannot find a way to meaningfully coalesce into a satisfying whole. We all know relationships are hard. Almost impossibly so. But they also offer all kind of opportunities — to be a better person, or to look at things from a new perspective. I liked a lot of the things I saw here. I only wish that I learned something new too.

Pink Wall is in cinemas across the UK on Friday, December 13th. On Amazon Prime and other platforms in April.

A Rainy Day in New York

The latest Woody Allen flick is yet another love letter to the city that never sleeps, a schtick that is proving increasingly tired - on VoD on Friday, June 5th [Read More...]