A Rainy Day in New York

"Mostly clean movie"
The latest Woody Allen flick is yet another love letter to the city that never sleeps, a schtick that is proving increasingly tired - on VoD on Friday, June 5th

Two young adults from wealthy backgrounds are in their formative years at a liberal arts school. Timotee Chalamet’s ‘Gatsby Welles’ is a sensitive, intellectual type; a rudderless chancer, content with a demimonde of high stakes poker games and dive bar pianists. His college paramour Ashley Enreight has adjacent sentiments and harbours journalistic ambitions (Elle Fanning, playing the Arizona country girl). These differences in temperament are smoothed by earnest youth and a mutual love of North American cinema classics – a passion that leads the pair to finally take a much discussed romantic weekend in New York as Ashley is tasked with interviewing Liev Schreiber’s arthouse director for their local newspaper.

This premise sets the scene for odysseys through two distinct NYCs as the characters are soon separated, plans gone awry. Gatsby hails from Old Money circles of New York and is desperate to demonstrate his authentic New Yorker credentials through a tour of hotel piano bars and Central Park brooding spots. All whilst unsuccessfully avoiding his commitment to attend his mother’s ‘autumn ball’ with likewise wealthy friends. This cloistered, chandaliered world is played in stark contrast to the quickly escalating silver screen adventures of Ashley. Screenwriters, film stars and paparazzi move across a different stage of modern split-floor apartments and trendy parties, with the frenetic neuroticism of the newly minted. Together, both settings are distinctly unrelatable to an average viewer and I was left wondering who exactly this film was made for, if not solely Woody Allen. The story of a developing college romance is more relatable but kept at a physical remove by the separation of the principals. 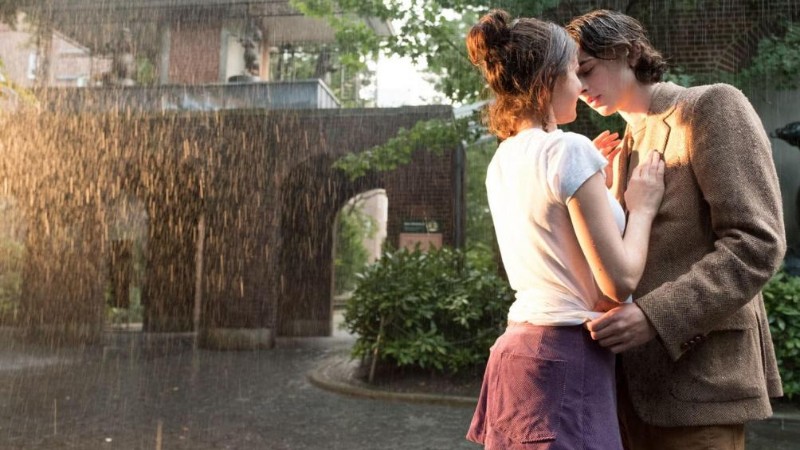 A similarly self-indulgent meta-referential thread runs through the film. Characters discuss New York movie clichés whilst living New York movie clichés. There is a sense that these scenes are played tongue-in-cheek but the distinct lack of irony belies this purpose. Likewise, dialogue is ropy with the vast majority of punchlines falling flat. The filmmaking setting gives room for parody and practically every male figure can be construed as a reflection of Allen and his insecurities.

There is an attempt to deconstruct the idea of the ‘muse’ as the somewhat pathetic older male figures are shown to fawn over the not-so-naïve Ashley, claiming that her voice is the only thing to get through to them whilst pushing for a more physical intimacy. This makes for uncomfortable viewing, considering the acknowledged female inspirations throughout Allen’s ouvre against the backdrop of his own sexual conduct. It feels a defense of sorts – as if by highlighting the absurdity of the lecherous filmmakers he can absolve his own allegations. It is as transparent as the Catcher In the Rye references. Less an homage and more a direct trasnposition, one scene even has Gastby lamenting the ‘phonies’ of his mother’s acquaintance in a bar scene that could have been ripped from the novel.

At least performances are strong, with both Chalamet and Fanning adding youthful charisma to the otherwise tepid script. A turn by Selena Gomez as the younger sister of Gatsby’s high school beau is also integral, though more unconvincing. However, the question remains, are journeyman acting and muddled themes enough to justify this film’s existence? There is a maelstrom of issues surrounding Allen and the release of this film that have been covered elsewhere. Suffice to say, should we be bending ethics backwards to ‘separate art from artist’ when the creative output is this stale or is his time truly up?

Charles Williams is a British-born writer based in San Sebastian, Spain, where A Rainy Day in New York has seen a theatrical release. The movie is out on VoD in the UK on Friday, June 5th (2020)

Michael Winterbottom's latest action thriller is a travelogue of the world's second most populous nation, and it starts off very well before it descends into something predictable and trite - now also available on VoD [Read More...]

Life must go on for a young woman after her teen daughter goes missing, in this dirty kitchen sink drama starring Sienna Miller - on VoD in April [Read More...]