"Mostly clean movie"
Russians and Americans battle on the chessboard at the height of the Cold War, in this extremely formulaic political thriller from Poland - now available on Netflix

Russians are rude, unpleasant, unscrupulous and they have no regard for human life. They play dirty and can only win by cheating. They hate democracy. They are plain evil. On the other hand, Americans are kind, generous, honest and with a profound respect for the well-being of others. They epitomise good, here personified by the kind and avuncular Bill Pullman. This is more or less how The Coldest Game is constructed. Surprisingly, this is a Polish movie. Yet, its Polish identity is nowhere to be seen. The action does take place in Warsaw, yet the nation’s culture and language are hardly there to be seen. It could be any country. This thriller is unabashedly American, from both an aesthetic and ideological perspective.

The year is 1962. The World Chess Championship takes place in Warsaw, and the contestants are American professor Joshua Mansky (Pullman) and Russian champion Gavrylov (Evgeniy Sydikhin). Masnky has been recruited by the CIA. A Soviet agent named Gift is there to ensure that Mansky does not win, and he will resort to very unorthodox measures in order to achieve his goal. He’s the real bad guy (his name means “poison” in German, suggesting what he might be up to).

This chess game, however, is a mere ersatz competition for something far more dangerous and significant. The Soviet Union is sending ships to Cuba, and the Americans suspect that they are loaded with nuclear material. It’s the Cuban Missile Crisis, and the world is on the brink of war. On October 22nd, John F Kennedy goes on national television in order to warn Americans and the world of the imminent danger. A part of his speech is shown in the movie. As the military crisis escalates, so do tensions on the chess board. 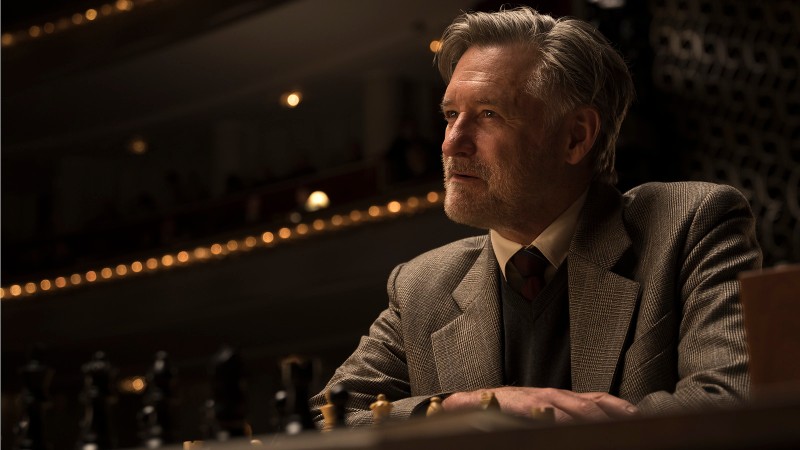 With more twists and turns than the Transfagarasan Highway of Romania, and an incredibly overwhelming and intrusive music score, this is your conventional American thriller in pretty much every single way. The extremely convoluted plot and fast-paced narrative gets tiring after just 10 minutes. The link between chess and nuclear arms is very weak and bizarre. An unexpected cork suddenly pops into the story in order to connect the two topics. There are also plenty of random murders (by poisoning and by fire weapons), bottles of vodka (Mansky is an alcoholic), a strange glass cage inside the American Embassy and even a very efficient hypnotist during one of the chess matches. A script is a real mess. Maybe the writers would have benefited from less vodka.

The movie wraps up with an extremely urgent and pertinent message about nuclear weapons, reminding viewers of the Intermediate-Range Nuclear Forces Treaty (INF) signed in 1987 by Reagan and Gorbachev, which was repealed by Trump and Putin earlier this year. The consequences of such irresponsible gesture could be catastrophic consequences for mankind. At least this time isn’t Russians alone that are to blame this time!

The Coldest Game showed Competition at the 23rd Tallinn Black Nights Film Festival, when this piece was originally written. It’s on Netflix in February.