The couple walks along. They’re completely in love. “Are you ready for this?”, asks Fonny (Stephan James). “I’ve never been more ready for anything in my whole life”, replies Tish (newcomer KiKi Layne).

Welcome to a movie that is at once one of the most romantic of the year – out just in time for Valentine’s Day – and a gritty indictment of the way black people are treated in the USA. Which sounds a pretty unlikely mix, but then Barry Jenkins is hardly an average director. His Best Picture Oscar winning Moonlight (2016) proved this for this writer by having one character at three different ages played by three actors and making that potentially disastrous proposition work so brilliantly on the screen.

If Beale Street Could Talk‘s source material is a 1974 novel set in Harlem by US writer James Baldwin (1924-1987) who explored the black experience in some considerable depth and is the subject of highly recommended documentary I Am Not Your Negro (Raoul Peck, 2017). The novel is Baldwin‘s response to the incarceration of black people for crimes they have not committed by a system, as he sees it, designed to keep them in their place through systematic abuse and mistreatment. Baldwin has a gift for writing about people, what makes them tick, their good and bad qualities. 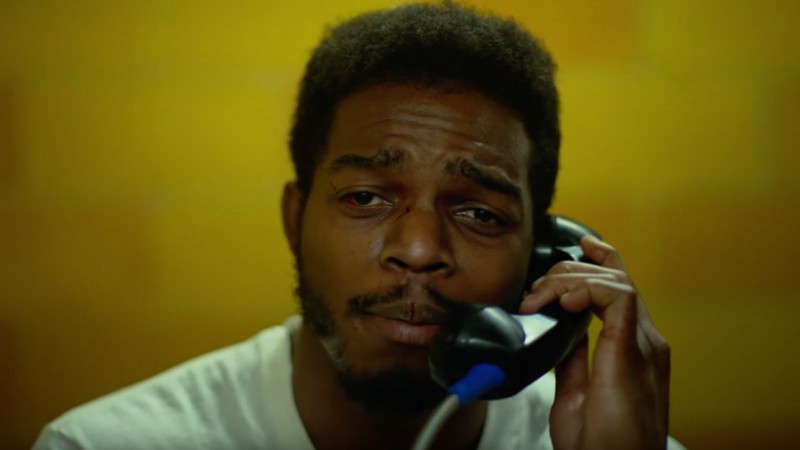 The film’s romantic opening soon gives way to something else: Tish visits Fonny, in prison for a crime he did not commit, to tell him she’s going to have his baby. The only way they can communicate is through a glass partition. They’ve been friends since childhood and are now partners as adults. But they’re not married and she’s got to tell her and his parents about the baby. And the family have to find a way to get him out of prison.

The narrative is a clever exercise in parallel editing. One strand shows Tish and Fonny’s life together, growing into love, finding an apartment, his being picked on by a racist cop (Ed Skrein). The other shows Tish’s story following Fonny’s incarceration, her telling both their families about the baby, the ongoing life process of pregnancy, birth and raising a son, fighting for her partner’s release with her mother’s help.

The two leads are terrific. KiKi Layne is a real find, capturing a mixture of innocence and fragility on the one hand and a perseverance and strength on the other. The latter is something Tish gets from her parents, especially her mother Sharon (Regina King) who at one point has to fly to Puerto Rico to persuade gone to earth witness Victoria Rogers (Emily Rios) to testify that Fonny wasn’t the man who raped her.

Although he gets less screen time, Stephan James as Fonny is good too whether showing Fonny’s essential optimism in his life in the outside world or his attempt to hold himself together as prison life threatens to make him fall apart, the latter experience only really seen from Tish’s side of the glass partition when she visits him. (There is no attempt to otherwise show Fonny’s prison life beyond such visitation scenes, no way the film might be described as a prison movie).

In addition there are numerous impressive bit parts – the film is surely destined to become a future Who’s Who of Black US acting talent – and other aspects of the production do it proud too. The sequence where first Tish’s family then Fonny’s react to the news of her pregnancy deserves a special mention, there being much to say about the way Tish’s family, despite being oppressed by a system rigged against their race, practise life-affirming values in marked contrast to Fonny’s family where father is driven to rage by feelings of powerlessness while mother and daughters use legalistic Biblical language to lord it over the “sinful” Tish. 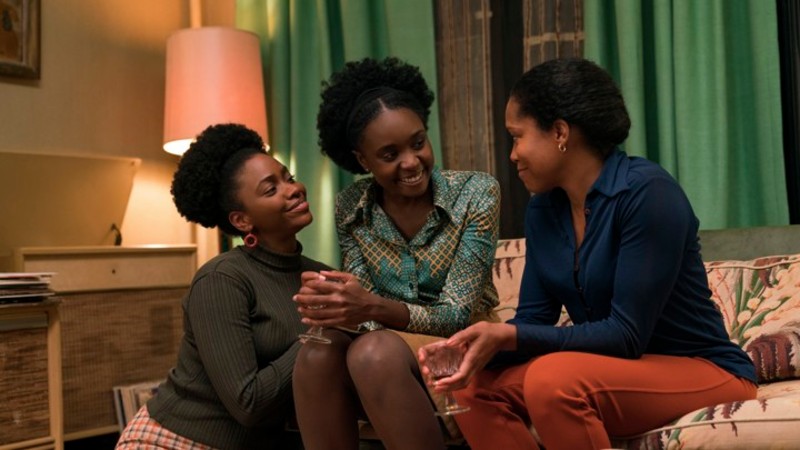 Special mentions should go to James Laxton’s cinematography for juxtaposing the lush, vivid palette of a seventies Harlem romance against the harsh, brutal colours of an oppressive prison environment (exactly the qualities that seemed to be absent from the cinematography of that other recent, period New York movie Can You Ever Forgive Me?) and an achingly beautiful score by Nicholas Britell. That said, this is one of those movies where all the technical people and their departments, those unsung, behind the scenes heroes of movie-making, each more than pull their individual weight to contribute to a whole that adds up to far, far more than the (considerable) sum of its parts.

This remarkable film consolidates Barry Jenkins’ achievement in Moonlight and deserves to be even more widely seen, not only because it so beautifully articulates the black experience in the racist society that is the USA but also because it’s so well put together in terms of all aspects of movie-making craft. The cast, main and bit parts, are to die for and it’s a great introduction to the writings of James Baldwin to boot. See it.

If Beale Street Could Talk is out in the UK on Friday, February 8th. On VoD on Friday, June 21st.