Heo Jin-suk (Moon Jeong-suk) wants to be a judge, traditionally a male profession. Her childhood sweetheart Wan Dong-hoon (Park Am) always assumed they were destined to be married. He too has entered the professions, in his case as a doctor. That’s okay for him, being a man, but for her he thinks it will conflict with her duties as a wife and mother. So she dumps him.

This looks like being a mistake since, on some level, his motives are pure. Instead, she ends up married to Chae Gye-sik (Kim Seok-hun) – not so much because of the man but because his social climber father, CEO of Sangyeon Construction Chae Sung-jin (Kim Seung-ho) thinks marrying off his son to one of the first female judges would be a really good idea, not least since it might put him in a useful position to be able easily bribe a member of the judiciary.

The attitude of Chae’s wife Ok-nyeon (Uhm Aeng-ran) to her working daughter-in-law seem scarcely better than those of Dong-hoon as she’s constantly telling Jin-suk that she should be at home preparing her husband’s meal. Gye-sik tends to come in drunk late of an evening while his wife is preparing for the next day’s court case. He also has eyes for pretty secretary Miss Oh Hwa-young which doesn’t bode well for the marriage. 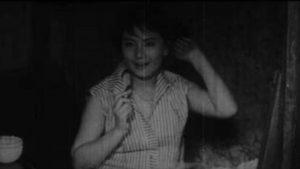 After Jin-suk’s father-in-law refuses to buy her sister-in-law Geum-won a piano, the latter spends a bribe sent to but unbeknown by Judge Heo on that instrument. The family grandmother, always complaining that she’s not being properly fed, is found dead of arsenic poisoning after consuming a fruit drink. This leads to a court case with the daughter-in-law, who by this time has given in to social pressure and resigned as judge to spend more time with er family, as defendant for the mother charged with the grandmother’s death.

Fascinating in terms of the ascendancy of women in Korean professional life, this fast-paced drama juggles intrigues with minor characters – the mother’s son from her previous marriage Kim Gi-chuel turns up and threatens to burn the house down if mum doesn’t pay him some money – and a murder mystery court case to boot. Very much of its time, but worth seeing.

A Woman Judge plays in LKFF, The London Korean Film Festival. Watch the Festival trailer below:

Three families face tough times in post-war Korea, but the way their young people deal with it suggest things will improve – from the London Korean Film Festival [Read More...]