"Greasy movie"
Three families face tough times in post-war Korea, but the way their young people deal with it suggest things will improve – from the London Korean Film Festival

Widower of some three years standing Kim An-dong (Kim Seung-ho) has done alright for himself in the mining business in Hokkaido, but now it’s after the Second World War, the occupying Japanese have been thrown out of Korea and he’s come back to Seoul where he lives with his grown up son Kim Geo-buk (Shin Seong-il, the lead in A Day Off, Lee Man-hee, 1968, and a huge Korean star).

The Kims are one of three families in a ramshackle set of basic houses sharing a courtyard. Ggangtong (Choi Nam-hyun) lives with his wife Ongmae (Hwang Jung-seun) and daughter Bok-sun (Um Aing-ran) to whom Geo-buk has taken a shine. Ggangtong’s first wife having died, Ongmae is the girl’s stepmother and is teaching her to sing bar songs so she can make herself and the girl’s father a lot of money via prostitution. The girl is understandably upset about this and instead goes out with Geo-buk to sell socks to soldiers at the nearby U.S. Army base where his dad, seeing the Americans as the most secure source of income in the area, wants him to get a job. Sitting by the railway at night, the young couple talk about getting work in the textile factory at Yeongdeungpo as a possible route out of their economic troubles. 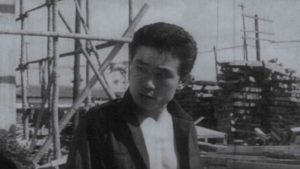 The third family comprises two brothers, one married, one unmarried. The older Won-pal (Shin Young-kyun) makes a meagre living out of scavenging bomb parts left over from the war. His wife (Lee Kyoung-hee), meanwhile, is extremely ill but Won-pal has no money to pay any doctor to even examine her, let alone find a cure, so she lies on the floor all day, barely moving. There’s a suggestion that the physical disabilities of both his wife and young daughter (Lee Gyeong-rim) have been caused by his ill-judged attempts to make money.

Won-pal‘s younger brother Won-chil (Choi Moo-ryong) went to university in Japan and has come back with the desire to write novels, “as if that’s going to put anything on the table”, as his infuriated older brother comments. When Won-chil is around, the pair seem to argue constantly. Their mother (Song Mi-nam) takes refuge in singing Christian hymns, citing Jesus’ words about “in my father’s house are many mansions” – pretty ironic given the family’s cramped housing conditions. If any other members of the family share her faith, they don’t show it. 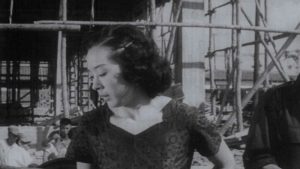 Won-chil has been trying to find paying work – but nothing has come of it. He’s also having problems with the girl he likes, Ok-hui (Kim Ji-mee). To survive, she is having a relationship with an American soldier since the G.I.s seem to be the only people around with a decent income. Meanwhile, one Madam Hwasan interests An-dong in buying from her a 29 year old potential bride, a refugee who has come down from the North (where the Chinese communists are in power). The economy is on its knees and the sex trade in its various forms seems to be one of the few areas that’s flourishing economically.

There is a bright light on the horizon, however, in that the young couple eventually get jobs at the textile factory and are seen as facing an optimistic future together, so much so that Geo-buk writes to ask both fathers to come and visit them there. It’s as if the film is trying to paint a rosy picture of Korea going forward, particularly through its young, post-war generation. There’s a lot of darkness here, but the country is going to move out of it and everything’s going to be all right. After some of the bleak material earlier, you wonder if the happy ending is just that little bit too pat. Nevertheless as a picture of the immediate post-war period in Korea made about a decade and a half later on, it serves as fascinating viewing today.

The film is also known under the English title Kinship.