"Filthy genius movie"
A man passes the boredom of Sunday in Seoul by spending time in the park with his lover, robbing an old schoolmate then going out drinking and womanising in bars – from the London Korean Film Festival

Shot in stark black and white, this opens with a voice-over which immediately makes you think you’re watching a film noir. However, A Day Off is something else entirely – there are no cops or gangsters in sight, the narrative concerning instead a couple of doomed lovers and the opening voice-over bemoaning the hero’s meeting with his lover Ji-Yeon every Sunday. That said, it is all about poor people struggling to survive on Seoul’s mean streets and the main character is constantly cheating his fellow citizens or stealing money from them, so its subject matter is not entirely noir unrelated.

Heo-uk (Shin Seong-il, a huge star who also has a bit part in the earlier Bloodline a.k.a. Kinship, Kim Soo-yong, 1963) asks a consults a bird fortune-teller as to what the day will bring: her trained bird picks out a card warning him to Stay Away From Women. To get to his rendezvous with Ji-Yeon (Jeon Ji-youn) with scarcely any cash, he pulls a double con on a cab driver and a stall selling cigarettes to avoid paying his fare. Later, in dire need of money to pay a debt, he tries to wheedle it out of a drinking buddy. Later still, Heo-uk drops in on old school friend Gye-je so bored that he’s already had six baths that day and robs him of both the cash in his jacket pocket and the watch lying atop it before scarpering. This act will come back to bite him at the end when Gye-je catches up with him towards the narrative’s end and beats him up. 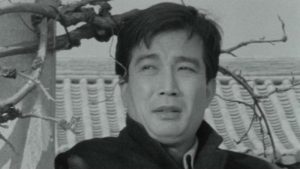 The main event, though, is the romance. Heo-uk meets Ji-Yeon in an alleyway and takes her to a deserted public park. It’s winter and there are no leaves on the trees. She talks about all the things they could have if only they weren’t so poor. They both berate themselves, He slaps her. It turns out she’s pregnant and needs the money to have what she coyly terms “an operation”. After robbing Gye-je, Heo-uk takes Ji-Yeon to the abortion clinic where the doctor warns him she wouldn’t be able to have the baby for health reasons and recommends an abortion. Once the operation is under way, Heo-uk goes to an up-market bar to get drunk and pick up the first woman he lays eyes on, the pair binge drinking their way through several bars before spending the night together on a building site.

Despite the weepy, romantic music when the couple are in the park together, this plays out as a brutal and hard hitting slice of life. Director Lee has an extraordinary eye and there’s always something going on visually – when the couple walk along the edge of the park, for example, the horizontals and verticals of the fencing preventing people from falling several feet into a ditch speak of inhuman, industrial production and an environment where people feel almost an afterthought. And towards the end, scenes of the hero walking in darkness are contrasted with visually far brighter images of him alone with his girlfriend in happier times. 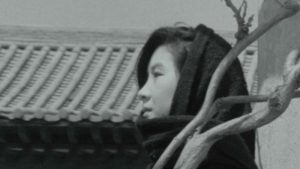 The film is both utterly compelling and a real downer, showing as it does the human condition at its very worst and most meaningless. The South Korean authorities were not pleased: they demanded changes. When director Lee refused to make any, they refused the film a release. Now widely considered his masterpiece, it remained undiscovered until the Korean Film Archive unearthed it in 2005. When you see it, you’ll wonder why you’ve never heard of this film before. Absolutely unmissable.

Watch the festival trailer below:

A middle-aged couple return to where they spent their first night together three decades earlier, only to come to the fateful realisation that the years have killed their affection - heartrending Korean drama shows at the London Korean Film Festival [Read More...]