Over fifty years old, Goryeojang is sadly available as only a print with two reels (three and six) missing. The LKFF screened the version where the missing scenes are explained by a brief series of intertitles so that the rest of the film can make sense. It’s a tough film to pigeonhole. A description like period drama, which genre it absolutely fits, proves woefully inadequate as a description. To a Western viewer, it plays out like a classic fairy tale with archetypal characters and considerable amounts of cruelty. The art direction is light years away from any sort of social realism with its rural sets obviously artificially constructed in a studio, recalling (to name but one obvious example) The Singing Ringing Tree (Francesco Stefani, 1957).

The concept of Goryeojang – taking your elders up a mountain when they reach 70 so that they can face death – is central to the world conjured here and all the characters accept the idea as part of their fate. This idea introduced in an opening, present day, TV discussion programme which is never referred to again in the film (perhaps the payoff came in one of the missing reels). Everything else takes place in Korea’s Goryeo Dynasty (918-1392). Keum (Ju Jeung-ryu) has remained in the village past her 70th birthday not out of some desire for self-preservation and longevity which we in the materialist West would recognise, but rather because her adult son Gu-ryong (Kim Jin-kyu) isn’t yet married and she wants to make sure that happens for him before she goes away to die.

Throughout the narrative a lady shaman loiters around the village’s sacred tree enacting strange songs and rituals to ensure local life proceeds according to tradition as it should. Early on, she prophesies to young mum Keum that the latter’s son will eventually kill the ten sons of the man Keum plans to marry, a prophecy which will overshadow everything that follows.

While her new husband in question is kind enough to her young son Gu-ryong, the former’s ten sons prove considerably less charitable and set the boy up in a game of blind man’s bluff wherein, while the boy is blindfolded, they place a venomous snake in his path which bites his leg when he unwittingly walks into it. This leaves the boy crippled. 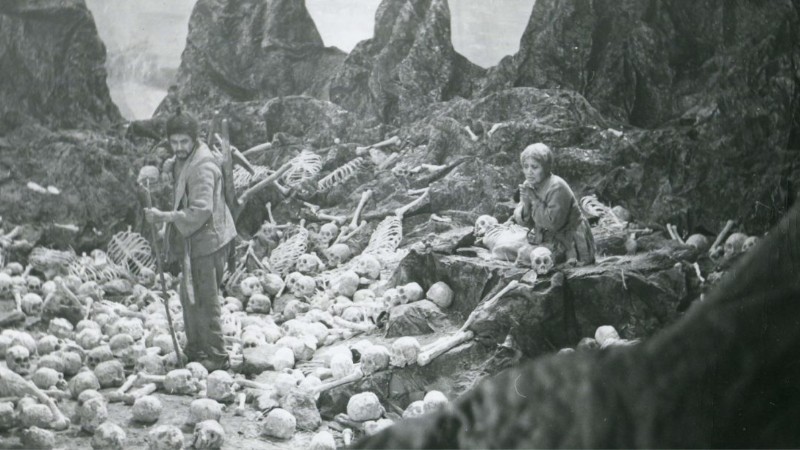 Twenty years later as an adult, the boy has become socially ostracised as no able-bodied woman will marry him. He’s also done rather well for himself causing considerable enmity between him and his ten stepbrothers. When Gu-ryong eventually marries a mute, they kidnap and gang rape her, leaving him on his own again. Later, he adopts a young girl with a pockmarked face Ye-on, another outcast who like Gu-ryong didn’t fit in with their former cruel siblings.

With the area in the grip of hunger caused by drought, the lady shaman insists that Gu-ryong must take Keum up the mountain and leave her there to appease the gods who will then send the much-needed rain.

Sequences such as the blind man’s buff/snake episode, the gang-rape of the mute and, most particularly, the late scene at the mountain top where Gu-ryong must abandon the aged Keum to her fate lodge in the memory of the viewer. The latter sequence delivers a place littered with human skulls and bones across which Gu-ryong traverses back and forth as he tries to leave but his mum keeps finding last words to say or suggestions to make before he leaves her forever. Director Kim milks this for all it’s worth, yet the performances are so heartfelt and the material so disturbing that it really gets under your skin. Most of Kim’s films are set in the present day, so the period historical nature of this one is something of an exception. The sex, violence and cruelty of the narrative is, however, in keeping with many of his other films, as is the almost fairy tale like quality.

Goryeojang is sometimes also known as Burying The Old Alive.

A US Blu-ray of Goryeojang is released by the Korean Film Archive on November 14th. Available here.

A woman with a laptop sits in a cafe observing and writing as individuals and couples come in, talk and go out – from the London Korean Film Festival [Read More...]