"Greasy movie"
A woman with a laptop sits in a cafe observing and writing as individuals and couples come in, talk and go out – from the London Korean Film Festival

Black and white. The weather is pleasant. In a Seoul backstreet a young woman stops to admire flowers and other vegetation in plant pots, just as the camera will do at the film’s close. Inside a cafe where the owner (who we never see) plays recordings of classical music, she sits and chats to a young man. In the corner, a woman (Kim Min-hee) is typing at her laptop. In the cafe, as people come and stay or go, she muses about them and writes. But when asked, she denies that she’s a writer. It’s a sort of diary. For herself, not for anyone else to read.

A number of the customers are actors or writers – one guy used to work for a theatre troupe but had a bust up with the guy who ran it and quit. He’s now reduced to asking people if they have somewhere he could live. Another guy has written a couple of screenplays, but swears that his first love is really acting and that, in time, acting is something he’ll get back to doing. 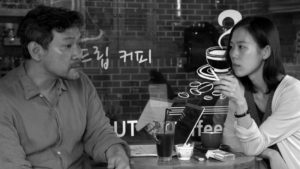 One way or another, a lot of the conversations get on to the subject of personal relationships and it’s pretty obvious there are some huge chasms between male and female. This applies whether its the woman at the start who admits to a man she’s going on holidiy, not with someone he knows, and therefore (as he works out) with someone he doesn’t. Or whether it’s the very much in love couple who chat with the laptop PC lady from the corner about how they’re thinking about getting married, At which Kim Min-hee suggests there are all manner of difficulties with this if the couple don’t really know each other beforehand – and that they need to be thoroughly honest with one another if the marriage is not going to fail. 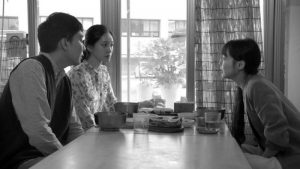 There’s a break to these sequences in the middle where one woman goes up and down the stairs, getting fast and faster, as she tries to clear her head and make up her mind about something.

The film is pleasant and enjoyable enough to watch, made with a great deal of improvisation, but in the end this is one of Hong Sangsoo’s slightest works. You might get a great deal from it. Or you might not and wonder instead why you didn’t spend your time hanging out at a cafe listening to people and watching the world go by for yourself.