Rise of the Footsoldier 4: Marbella

"Greasy movie"
Craig Fairbrass delivers a great performance as the terrifying Essex lad, in crime drama about ex-con who travels to Spain in search of drugs for his Southend nightclub - in cinemas sand digital on Friday, November 8th

America has superheroes. Essex has hard boys. Very hard boys. They would wipe the floor with the Avengers. Despite being the third film after Pat Tate’s (Craig Fairbrass) untimely demise at the end of Rise of The Footsoldier (Julian Gilbey, 2007)— part of a real gangland murder that has been mythologised, Batman-like, in three different movies — Rise of The Footsoldier 4: Marbella dives even deeper into the backstory of the most popular character in the franchise (and perhaps all of Essex). While never remotely coming close to the gangster-in-paradise heights of either The Business (Nick Love, 2005) or Sexy Beast (Jonathan Glazer, 2000), Marbella is an undeniably entertaining Essex-lad romp that even further blends black comedy with cartoonish violence to a gleeful fever-pitch.

It starts with our hero Pat Tate finally out of prison, sometime in the mid-90s. He walks into his Southend club and automatically notices there’s no pills left. He moves out to Marbella to look for Frank Harris (Larry Lamb), the man who double-crossed him. Sadly Frank has died (literally shagged to death) yet another lad, Terry Fisher (Andrew Loveday) has taken his place. Although sceptical to work with the successor to his traitor, he accepts the job as Fisher’s bodyguard in exchange for a huge shipment of pills. Things get more complicated however, when another gangster appears on Fisher’s turf, leading to an inevitable bloody showdown.

This is the Essex gangster distilled to its most essential form. British gangster film regulars, and fine actors when they want to be, Terry Stone and Roland Manookian, play the Rosencratz and Guildenstern to Tate’s Hamlet, two hapless fools charged with getting the cash to Marbella before getting back in time for Nigel Benn’s big boxing match (a real-life tie-in only men over 40 will understand). Taking a connecting flight in Amsterdam, they spend a reckless, prostitute-and-weed-filled night in the Red Light District, soundtracked to Corona’s Rhythm of the Night. It’s completely stupid, but I laughed throughout. By rarely taking itself seriously, and by holding itself to no standards whatsoever, the expletive-ridden, casually misogynistic and callously violent Marbella achieves a kind of comic-book purity. 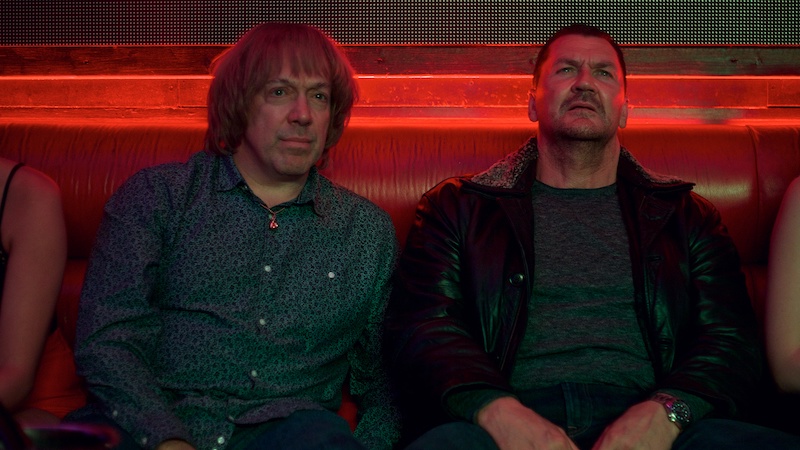 The strange success of the movie — which at a basic plot, acting and writing level, is quite flat— is embodied by Craig Fairbrass’ go-for-broke performance. Tate is the quintessential anti-villain of gangster cinema, a terrifying caricature with few redeeming features. He makes Joker look like a soppy mug. There has never been a problem Tate couldn’t punch in the face. Often coked up to his eyeballs, he is brash and impulsive, moving around like an early 90s Steven Seagal but with the same man’s current day physique. This is a guy who beat up a waiter in the original Rise of the Footsoldier for leaving him his bill before he asked for it. Who slits a restauranteur’s throat with a pizza cutter for refusing to give him the toppings he wanted. Here the ante is turned even further up, mauling his enemies with forks, golf clubs and other assorted instruments. It’s all completely ridiculous, but Fairbrass doesn’t blink, single-handedly holding the entire film together and somehow making it work.

As its the same coterie of actors that appear in almost every direct-to-DVD British gangster film, it feels like hanging out and having a few drinks with old friends. Your mileage might vary. It will play perfectly to its target audience: balding men in their 40s and 50s who wear leather jackets with blue jeans. Men who support either Chelsea or West Ham. Men who only listen to New Order, The Stone Roses and Oasis. Men who pay £30 to watch boxing on Sky. Men who think going to Continental Europe means either Amsterdam, Prague or the South of Spain. You know the lads. It will work best in a big group of them. Bring them around and drink every time Pat beats someone up. You’ll get drunk quickly.

Rise of the Footsoldier 4: Marbella is in cinemas and digital on Friday, November 8th.

Once Upon a Time in London

British gangster movie has historical depth, but it's ultimately watered down by down by a run-of-the-mill script and countless cliches - on Netflix from January 11th [Read More...]

Romain Gavras's second feature is a gangster comedy mocking European cliches, while also teeming with the colours of the Mediterranean; sadly the story is just too silly and disjointed - in cinemas Friday, April 26th [Read More...]