"Dirty gem"
Korean director Hong Sang-soo has taught our editor Victor Fraga to be patient when looking at cinema; sometimes you have to open your heart before a story penetrates your soul - from the London Korean Film Festival

I watched my first film by the Korean filmmaker Hong Sang-soo earlier this year in the Berlin Film Festival and I hated it. I found On the Beach at Night Alone so boring and insufferable that I compared it to “watching paint fade”. I thought that it was even slower than Eric Rohmer’s films (who I happen to like a lot), which a critic once famously described as “watching paint dry”.

I am now on my third Hong Sang-soo film and so I have decided that I reassess my relationship to his language and pace. The black-and-white The Day After takes place almost entirely during a single day, when Song Areum (Kim Min-hee, pictured above) starts her new job, only to be confronted and assaulted by her boss Kim Bong-wan’s (Kwon Hae-hyo) wife, who mistakes her for his lover. Understandably, she wants to keep it quiet, but Bong-wan insists that she doesn’t. Then his real lover unexpectedly turns up and the story takes a hilarious turn. The fallibility of the male is fully exposed, plus his inability to recognise his mistakes, lies and shortcomings. 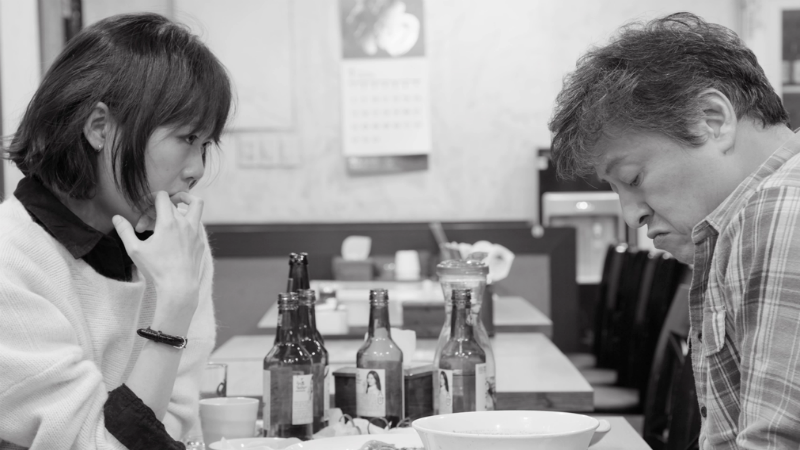 The Day After is urgent in its simplicity. The dialogues are mundane and banal, and yet extreme engaging in their shallow philosophical thinking. Despite being set in Korea, you will feel that this have taken place anywhere and you are guaranteed to recognise yourself in the platitudes that the characters utter. The little twists are extremely credible and touching in their directness and candour. The catty and the petty fights are very similar to the ones you have experienced, whether you are Korean, British, Nigerian and Ucuadorean. This is cinema at its fullest universality.

The very beautiful and talented Kim Min-hee (she won the Silver Bear for On the Beach at Night Alone) is a regular actress for Hong. In fact, she’s the protagonist in all of his three films that I have seen. The three movie also have common topics: all three focus a young woman having an affair or a dalliance with an older and more powerful man. I would hazard a guess that his films have strong autobiographical elements. And they almost feel like a continuation of each other. And the more you watch, the more you get absorbed. Maybe watching paint fade isn’t so boring at all!

The Day After showed at the 70th Cannes Film Festival, when this piece was originally written. The film is opening the London Korean Film Festival starting on October 26th. We are giving away a pair of tickets for the special screening. Just write to us at info@dirtymovies.org; we will announce the winner on October 25th.