"Greasy movie"
Turning Japanese? A Western woman in Japan finds herself at the centre of a web of sex, intrigue and quite possibly murder - thriller starring Alicia Vikander is now available on Netflix!

Tokyo, 1989. An American woman who’s not long been in Japan has disappeared and the last person to see her alive is Lucy Fly (Alicia Vikander) who has lived in the country for five years, two months. Lucy is hauled in for questioning by the police and as her life in Japan slowly reveals itself in flashback, it becomes apparent why they want to talk to her.

Lucy is quiet, reserved, introverted. She mostly keeps herself to herself. She fits in well in Japanese society with its emphasis on the importance of the group over the individual. She is fluent in Japanese and works as a translator. She plays cello in an amateur string quartet with three much older Japanese women.

She also socialises with a group of international expats which is where Bob (Jack Huston) introduces her to the woman about whom the police wish to question her, Lily Bridges (Riley Keough) who is working as a nurse. The two women possess very different personalities. Lucy might be foolish to agree to take the newly arrived foreigner under her wing and show her the ropes. Lily is the stereotypical American: brash, outgoing and nosy. Not someone you imagine adapting well to Japanese society. She doesn’t even speak the language. 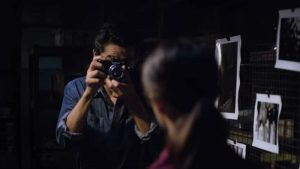 Lucy’s life changes when she runs into a man taking photographs on the street. He claims not to be interested in photographing people, only buildings, water, reflections. Something hooks her. Teiji Matsuda (Naoki Kobayashi) works at a noodle restaurant, but amateur photography is his passion. Soon she’s regularly going back to his flat, strangely situated at the top of an exterior spiral staircase and fully equipped as a darkroom, to be photographed. When on one occasion she removes her top, he tells her that wasn’t what he wanted. Before long, however, the pair have entered into a full-on, physical relationship.

She becomes obsessed with the photographs of old girlfriends Teiji keeps locked away in a filing cabinet. She knows where the key is and takes a look. When he later finds out, he is not pleased. Lily, meanwhile, wants to meet the boyfriend and when she does is clearly attracted to Teiji. This classic love triangle setup is fuelled by the growing tension between Lucy and Teiji.

Much as it would like to play like a Japanese thriller, Earthquake Bird is the adaptation of an English novel and it doesn’t feel very Japanese – despite a great quantity of Japanese dialogue, much of it delivered by Vikander. (To her credit, for this film she had to learn both the Japanese language and playing the cello, the latter something she’d learned a little as a child.) That said, as an outsider’s view of Japan, it’s convincing enough. And it has to have something of a grasp of Japanese culture and the country’s mindset to work. 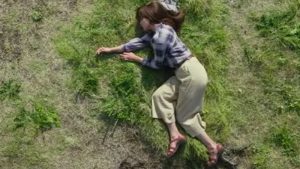 When the police initially question Lucy, they do so in second-rate English until they discover she’s fluent in Japanese, something she doesn’t initially reveal. This seems to be typical of the woman. She is beset by guilt for an incident in her pre-Japan past for which she rightly or wrongly believes herself responsible.

For those wondering about the title, it relates to a bird that, as Teiji explains to Lucy, if you listen carefully, can be quietly heard to sing following an earthquake. There are several small-scale literal earthquakes in the narrative, that are soon over without any ill after effects. And then there are minor earthquake-comparable incidents, like a violinist from the string quartet slipping down steps to her death, to the shame of her fellow player who has recently polished the stairs and fears she may be responsible for the accident. Or Lucy falling ill when she, Teiji and Lily go on a day trip to Sado Island.

The whole is visually arresting throughout, with top-notch cinematography by Chung Chung-hoon who shot Oldboy (Park Chan-wook, 2003) and The Handmaiden (Park Chan-wook, 2016) and production design by Yohei Tanada who also did ManHunt (John Woo, 2017) and The Third Murder (Hirokazu Koreeda, 2017), so while you could wait a couple of weeks for it to turn up on Netflix, you might enjoy it more if you see it on the big screen first. As you might expect from Wash Westmoreland, previously the co-writer-director behind Still Alice (2014) and Colette (2018), this is as much character and culture study as it is thriller, which may infuriate some but reward those with the patience to take it on its own terms.

Earthquake Bird is out in the UK on Friday, November 1st. On Netflix in March!

Biopic of French writer Sidonie-Gabrielle Colette starring a stunning Keira Knightley details her struggle to overcome strict societal constraints of the Belle Époque and to become an artist in her own right - now available on VoD [Read More...]