"Dirty gem"
A family of charlatans takes up prestigious jobs with a mega-rich family, in Korean comedy-thriller about social climbers and failed capitalistic dreams - BEST PICTURE OSCAR WINNER is on VoD on Monday, June 1st

A small family of four lives in a shoddy basement flat in an impoverished district of South Korea. They face unemployment, and the future does not looks bright. They steal wi-fi from their neighbours. They panic when the password is changed, leaving them disconnected from the rest of the world. But that isn’t their one “parasitic” action. All four are con artists. One by one, they take up highly qualified jobs with a super-rich family, which also consists of four members. They are very well-spoken and manipulative. Their bosses never suspect that there’s something wrong with their highly “diligent” workers. These impostors are also extremely charming. Your allegiance is guaranteed to lie with them.

Firstly, the son Ki-woo (Wook Shik-choi) forges an Oxford diploma and takes up a job as an English teacher for the family’s teenage daughter Da-hye (Jung Ziso). Eventually, he also seduces her. Then the cynical daughter Ki-jung (Park So-dam) becomes an art teacher and therapist for the family’s young son Da-song (Jung Hyeon-jun). She demands that her bosses never interrupt her “lessons”. The father Ki-taek (Song Hang-ho) becomes a family driver after Ki-jung plants some knickers in the family car, getting the previous driver sacked. Last but not least, the mother Ghung-sook (Hyae Jin-chang) becomes the housemaid after after their loyal employee Moon-gwang (Jeong-eun Lee) is fired, following an cunning plan to make her look infected with TB.

The wealthy boss Mr Park (Sun Kyun-Lee) is kind and polite, while his wife Yeon-kyo (Cho Yeo-jeong) is as gullible as one can be. Like a gaslighting victim in the Hollywood films from yore. Their mansion is beyond extravagant, with lavish furniture and enormous glass walls facing an ostentatious garden. It reminded me of the house in A Clockwork Orange (Stanley Kubrick, 1971), plus a few Korean items. Their money is so abundant that they splash it on a luxury tent for youngest son, who has suddenly become obsessed with American Indians. They epitomise a lifestyle that’s empty and futile in its essence, and yet envied by most South Koreans. 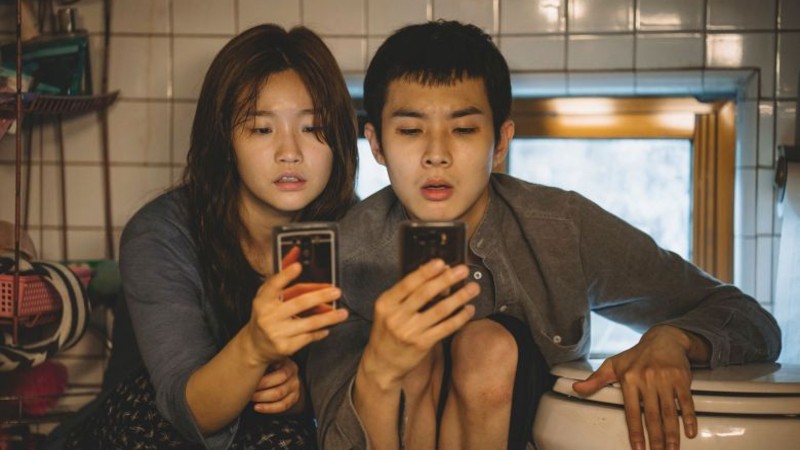 There is also an enormous dungeon complete with corridors and bedrooms. A little bit like Josef Fritzl’s basement. Its entrance is concealed behind an enormous larder, and the house owners seem completely unaware of its existence. One day the old housemaid Moon-gwang returns claiming that she has “forgotten” something. She reveals to the four scammers (who are throwing a little party in the house because the house owners went camping) that her husband has been living there for more than four years, hiding from shark loans.

Failed capitalistic dreams, invidiousness and consumerism are at the heart of his creepy little tale. This 132-minute movie is an extended riff on the pitfalls of a fast-growing economy with little regard for the least advantaged. South Koreans are becoming increasingly materialistic, competitive and aggressive. They are are prepared to cheat, to swindle and to wheedle their way up the socioeconomic ladder, where their can enjoy and boast their social status.

Overall, Parasite is a fast-paced comedy of the absurd with a few ingredients of a thriller thrown in. It has some very peculiar moments, including an awkward sex scene between Mr Park and his wife (with our adorable scammers hiding underneath the sofa), and a very major flood in the district inhabited by Ki-taek’s family (with dirty water gushing from the toilets). Poverty is nasty and murky. So stay away from it. The final part of the film, however, is a little redundant, with the plot suddenly descending into grisly violence. It feels a little directionless and gratuitous. Still, there are plenty of dirtylicious moments to enjoy.

Parasite premiered at the 72nd Cannes International Film Festival, when this piece was originally written. It won the Palme d’Or, in an unanimous decision by the jury. It then became the first foreign-language movie ever to win the Oscar for Best Picture. The film was also a bit hit with film critics and industry delegates alike. Very few people had reservations.

It’s out in cinemas across the country on Friday, February 7th. On VoD on Monday, June 1st.