"Dirty gem"
Pablo Larraín's latest film, about a female grappling with an infertile partner and adoption, is far more subversive than his previous historical dramas - now on Amazon Prime

This is a movie that starts out on fire – a metaphor appropriate for the lives of characters who seem to burn with the heat of their passions. Director Pablo Larraín takes a break from his usual environment – the historical drama – and delivers a modern and tension-filled character study centred on a powerful performance by Mariana di Girolamo.

She plays the title character, a dancer whose marriage to choreographer Gastón (Gael García Bernal) has been in a deep crisis after the unsuccessful adoption of an orphan. With nothing to ground her emotionally, she sets out to get the boy back – whatever the cost. The same plot could serve as the basis for a post-watershed TV thriller, but Larraín refuses to come up with easy answers. The outcome is avant-garde in both form and content.

In an interview, the Chilean filmmaker has mentioned the existence of a first cut of the feature that his close circle found incomprehensible. The current version in broken down into three acts. This structure does not prevent Ema from flowing smoothly like as a stream of consciousness. The sensational colours captured by cinematographer Sergio Armstrong give the action a delirious tinge. 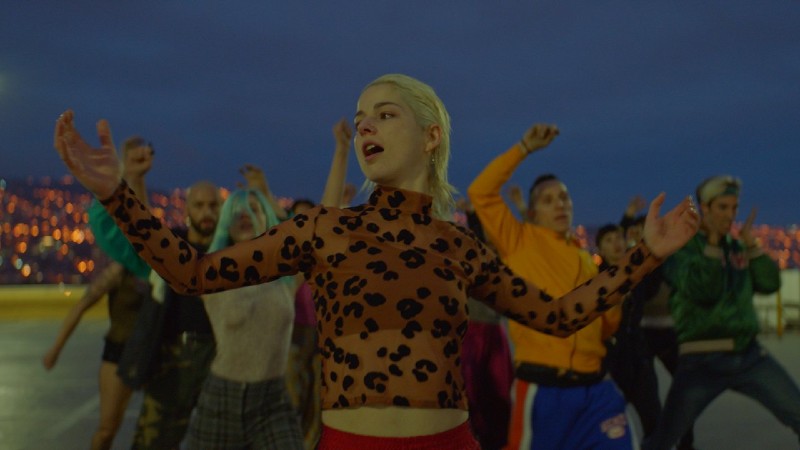 Here, the universe of dance, the landscapes of the coastal city Valparaíso and the energetic soundtrack by Nicolas Jaar reflect and amplify the protagonist’s uncontrollable desire for freedom. The script, penned by Larraín, Guillermo Calderón and Alejandro Moreno, anchors the story to an unstable character, difficult to root for.

Ema’s paradox is that she longs to be free almost as intensely as she wants to be a mother – and these two goals aren’t necessarily always compatible. Much of her maternal verve comes from the desire to transcend her emotional turmoil. Her instability drives her to constantly challenge constraints. She explores her body to the maximum through choreography, hooks up with different partners despite her marriage and indulges in sexual acts that are not bound by gender or number of participants.

Faced with Gastón’s infertility and a traumatic adoption process, she goes through increasingly selfish and Machiavellian schemes to get what she wants without any remorse. Symbolically, the protagonist’s inability to properly deal with life is manifested in her pyromania, which she even passes on to her then adopted son. For her, fire is a tool for escapism which obliterates the past.

It is evident that, outside the festival circuit, Ema will be more welcomed by the arthouse crowd. It’s a demanding watch and its elliptical twists and turns might put more mainstream audiences off. It’s their loss, since Larraín has bravely delivered one of his best works: a film as indomitable and indefinable as its protagonist.

Ema is on Mubi in May, and then on Amazon Prime.

Redreaming the dreamer: biopic of the Chilean poet and politician Pablo Neruda is as imaginative and colourful as the man it portrays, and a fitting tribute to one of the most important voices of literature and communism in the 20th century - now on Blu-ray, DVD, and iTunes [Read More...]

Is this the enfant terrible of Latin American cinema?

In an exclusive interview with Dirty Movies, Chilean director Pablo Larraín discusses the use of silence, humour and other feats of The Club - a controversial movie about child abuse and the Catholic Church in his country [Read More...]