"Filthy genius movie"
As a white supremacist thug becomes romantically entangled with a single parent mum, his lifestyle and view of the world begin to unravel - now available on VoD

Running through this as a framing device and very narrow, ongoing thread is Bryon Widner aka Babs (Jamie Bell) undergoing the extensive and painful surgical process of multiple tattoo removal. For the narrative outside of this cinematic device, his head and torso is the site of numerous tattoos. In addition, when he removes his trousers to expose his inside legs to an interviewing lady police officer, they bear the indelible words “snitches get stitches”.

Bryon has been taken in, in more than one sense of the phrase, by Fred ‘Hammer’ Krager (Bill Camp) and his partner Shareen (Vera Farmiga) who run a chapter of white supremacists named Vinlanders. Their basic creed is that white lands like America should be for white people only and that those of different skin colour should be expelled. (Never mind the fact that whites stole the land from native American Indians in the first place.) We watch their m.o. as Fred approaches vulnerable, youthful drifter Gavin (Russell Posner) and offers him home and family in exchange for buying into an extreme right wing ideology, then puts him in Bryron’s care – a charge which Byron, who currently has complex issues of his own, almost immediately abuses. 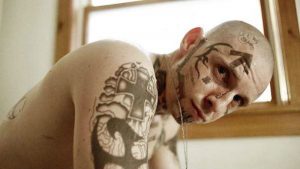 So what’s going on with Byron? Initially, he’s on a white supremacist march where he badly beats up the black guy unfortunate enough to get picked on by Byron. Which later results in Byron’s being taken in for questioning by racist tension activist worker Daryle Lemont Jenkins (Mike Posner) and Agent Jackie Marks (veteran star Mary Stuart Masterson in a bit part). Outside of rioting and being arrested, Byron indulges in brutal sex with girlfriend April (Louisa Krause) who is likewise a member of Fred and Shareen’s gang.

But then, Bryon attends a rally at which are performing the three children Desiree (Zoe Colletti) Sierra (Kylie Rogers) and Iggy (Colbi Gannett) of single mum Julie Price (Danielle Macdonald). He finds himself defending them in extremely violent manner against fellow gang member Slayer (Daniel Henshall) and striking up a serious relationship with Julie which is destined to end in marriage, although it follows a far from smooth path and subsequently sours.

The film is based on a real life case on which Israeli-born director Nattiv has clearly done a considerable amount of research. It’s a terrific study both on the level of (multiple) character(s) and on the dynamics of US white supremacism as a movement and a phenomenon. Many of the actors dig deep to deliver astonishing performances. 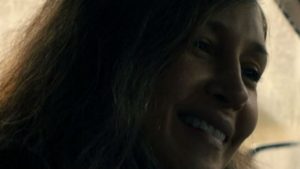 This clearly applies to Jamie Bell. You wouldn’t lightly describe a Bell performance as one of his very best because it’s hard to remember him giving a performance which wasn’t really good, but he really stretches himself here.

The other standout performance is from Vera Farmiga, nothing less than brilliant playing a devious and manipulative woman in whose hands many lesser individuals are putty. In short, this movie is a tremendous piece of work, well worth seeking out while it’s in UK cinemas.

Skin is out in the UK on Friday, September 27th. On VoD in March. Watch the film trailer below:

Black teen grapples with his dysfunctional family and his national identity, in this very personal coming-of-age drama - now available on VoD (including Netflix) [Read More...]

Sylvester Stallone sleepwalks into a litany of violence in this gnarly swansong to his defining character - on VoD Friday, May 21st [Read More...]