"Dirty gem"
Different simian races, a captive foreign prince in a Victorian-styled city and a mysterious, jungle beyond make up this animated slice of French fantastique – from the BFI London Film Festival

Hidden away in the LFF’s Family section where it looks like a suitably harmless piece of children’s animation, this turns out to be a fascinating exploration of difference and bigotry set among different simian races.

Prince Laurent, King of the Laantos turns up on the distant shores of the land of the Niokous. After being subjected to a full medical and scientific examination by Professor Abervrach and his team and their discovery that Laurent doesn’t speak their language, the Prince is sequestered in huge, secluded rooms within the Professor’s vast labyrinthine mansion complex.

Abervrach is assisted by a nurse named Nelly and the decidedly less friendly Elizabeth. He wants to present the newly arrived stranger to the science academy to prove his thesis about other races existing outside their country

The one person with whom the Prince really makes a connection is a boy named Tom. Selected by the Professor to be the stranger”s companion, Tom is gifted at languages, able to learn the tongue of the foreigner and consequently communicate with him. They talk for hours and become firm friends.

Through their discussions it emerges that the city visible through the mansion’s vast windows is slowly being overrun by the jungle surrounding it. This is confirmed by occasional elements of vegetation which appears to have forced its way into the edges of the mansion’s interior architectural features. 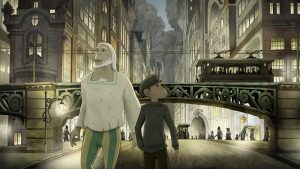 Eventually, Tom takes Prince Laurent on a trip outside to see the Victorian-styled city viewable from the mansion’s huge windows, where they board a tram and travel a circular route which takes them out of the city into the jungle beyond and back in again. They also find themselves attending local revelries in the form of a masqued event called the Festival Of Fear. Fear, it seems, is the guiding emotion in the metropolis.

Tom’s initiative in organising this trip will incur the Professor’s displeasure and lead to Tom’s being barred from visiting the Prince, who will later become caged like a zoo animal and put on public display. Tom will help him escape. Together, they will discover the wonders that lie beyond the confines of the city’s deeply regimented world.

The fact that all the characters are apes, some of whom treat others as inferior, has echoes of the Planet Of The Apes franchise(s) (1968, onwards) which originally sprang from French source material, Pierre Boulle’s novel Monkey Planet/La Planète Des Singes. It’s not Laguionie’s first foray into this territory: he previously made A Monkey’s Tale/Le Château Des Singes (1999). 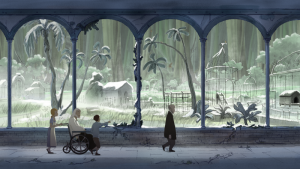 The Prince’s Voyage is also remarkable for conjuring a whole other world, one in which a nineteenth century aesthetic holds sway. Somehow, that seems a good fit. Maybe it’s because Victorian sideburns are not entirely dissimilar to simian facial hair. Maybe it’s because on some subliminal level we make a connection between the period and Darwin’s theories of man being descended from apes. Either way, the visuals look fantastic on the big screen, taking the tale to a whole other level. And when The Prince and Tom finally leave the city for the jungle, what the directors achieve with that latter environment is equally visionary.

While there’s nothing here that’s unsuitable for children, this 2D animated slice of French fantastique is a clever fantasy that never insults an adult’s intelligence. Plus, the LFF are showing it in the original French language with English subtitles (with English voice translation on headphones for younger viewers). A visual treat.

The Prince’s Voyage plays in the BFI London Film Festival. Watch the film trailer below:

The vaquita are being driven to extinction by vast amounts of gillnetting placed by totoaba traffickers near Mexico. Now a group of people have come to their rescue - now available on VoD [Read More...]