"Mostly clean movie"
Sylvester Stallone sleepwalks into a litany of violence in this gnarly swansong to his defining character - on VoD Friday, May 21st

It’s been 11 years since we last saw John Rambo kill dozens of people with guns, arrows, knives and even his bare hands – and with good reason. Rambo (2008, Sylvester Stallone) was so genocidally violent that we needed this respite, this breather.

Stallone had seemingly gone mad, directing a film that was far more vicious than the previous three films combined. He lifted the stark, savage aesthetic of Saving Private Ryan (Steven Spielberg, 1998) and applied it to the pulp of the action genre. There wasn’t a single memorable character in it, granted, but as a spectacle of murder it was something to behold.

So when the teasers for Rambo: Last Blood did the rounds, I had flashbacks of gore drenched .50 cal machine guns and all the other wanton gratuity that had so amused me as a 15-year-old boy. Surely Rambo had been a one-off, a moment of madness? After all, The Expendables 3 (2014, Patrick Hughes) was a 12A.

The BBFC’s issuing of an 18 certificate, then, came as a very welcome surprise. Not even the litany of negative reviews – or Rambo creator David Morrell’s abject disgust – could dissuade me from spending £8.50 at the Tottenham Court Road Odeon (there were no press screenings). 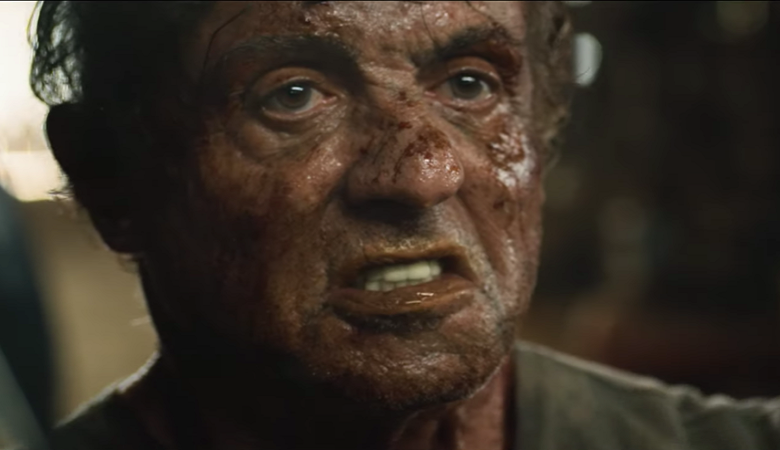 Well, the results are mixed. It starts off strongly with Rambo breaking a man’s clavicle, digging his finger into the wound and roughly fiddling with the bone until it breaks off. It’s nice – you don’t see that everyday.

Rambo then visits a brothel wielding not his signature 10” blade but a big metal hammer, which he proceeds to bury in the heads – and crotch – of several punters. This was a bold move to take, because whether it’s Drive (2011, Nicolas Winding Refn), Kill List (2011, Ben Wheatley) or You Were Never Really Here (2017, Lynne Ramsay), we live in a culture that’s saturated with hammer-based brutality. And I’m delighted to report that John Rambo, although being late to the party, decidedly holds his own here.

After remorselessly stabbing and even beheading a few more loathsome goons (he used his knife for that one), Rambo invites the cartel back to his ranch, which sits upon a labyrinth of weaponised tunnels. It is here that John reminds us of the full extent of his bloody ingenuity, using a variety of blades, tools and bombs to dislocate, dismember and destroy. However, while there’s some good stuff in there, it doesn’t match the sheer scale of Rambo’s Burmese massacre (perhaps that should have been the title?), and it’s for that reason that Rambo: Last Blood isn’t quite the send-off I had hoped for.

It is, even to the most nostalgic fan, a shockingly empty piece of work. The revenge plot is the tritest fodder imaginable and the dialogue was clearly written by someone in a catatonic state. Speaking of catatonic states – Sly Stallone’s performance borders on the inanimate. Of course, John Rambo has never been a character of great range, but Stallone’s work here is barely distinguishable from that of The Expendables, Escape Plan and his other recent, derivative efforts. In fact, the whole film is barely distinguishable – and that is a sure sign that John J. Rambo should go on permanent R&R.

Is violence the only way out?

Jack Hawkins lists five dirty films where the characters resort to shocking violence as an unexpected cathartic device, as they snap under various types of pressure [Read More...]

The Fast & Furious saga continues to bloat and extend with the franchise’s ninth instalment and first spin-off - now available on VoD [Read More...]